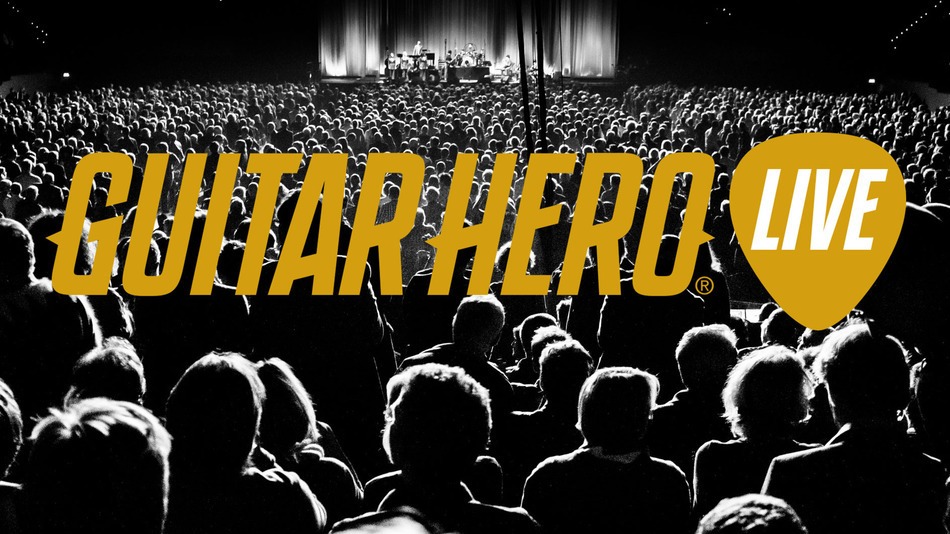 The first thing we need to get out of the way is that this is not a Harmonix game.  New developers Free Style Games have stepped up to the plate, and delivered the newest installment. So this is still guitar hero, but it’s not a Harmonix guitar hero. That being said, it’s still a great rhythm game, it  has plenty of new touches and only a few negative points that I might expect out of the first game of a new franchise.

Guitar hero basically invented the rhythm genre, so it should be no surprise that it can now re-invent it.  The biggest change to Guitar Hero Live is to the Guitar itself. It’s got six buttons now, three white and three black arranged in two rows. This is a radical change from the previous five brightly colored buttons. I found the new layout to be easier, requiring less movement of the hands, but more difficult to pick up than it previous incarnation. The games icons are arranged as such that you can see if you need to press the top or bottom row while strumming, but this means you now have to set left or right handed and makes the game less practical as a pass around party game.  It’s fairly clear on screen which button you need to press, but I still found myself missing a fair few notes as I moved from top row to bottom, as well as missing the combined notes where both top and bottom need to be held.  The buttons top and bottom rows have different textures which help distinguish them, and their natural feel means less looking at the fret board and more playing. Overall the guitar redesign is a HUGE win for this new Guitar Hero game, it pushes fresh life in to a series that got too bloated. One thing the controller does lack is a headphone jack, so there won’t be any silent rocking out at your house. 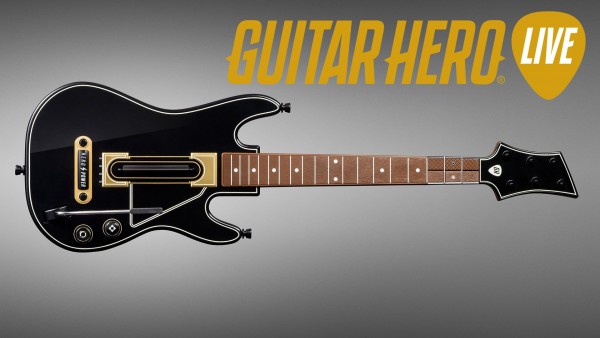 The new guitar with its six button layout

Core gameplay is still the same, thank the gods. Little icons (now shaped like guitar picks) roll down a “highway” towards the “fret board” and when they cross the board you hit the strum bar, while holding the correct key. It’s still Guitar Hero, if you were alive in the mid 2000’s you at least saw it. I recall spending nights during college playing in the large circular common room with 4-5 other people and jamming out all night, on a set of guitars. The only real difference here is that you’re only going to be doing that with two people instead of the old limit of four. Otherwise this is still a pretty fun party game.  The one limitation is that now the buttons are set up for right or left handed and you need to change an option before switching to the other hand.

The game contains two core modes, as well as free play, the campaign mode, called Guitar Hero Live, and the always online Guitar Hero TV. The single player mode is what this game was sold on which is real shame because it’s the online only multiplayer that really shines here. Live is fusion of 1080p video recorded from the perspective of a band on stage and classic guitar hero mechanics. The result is interesting, but I found it too busy for my tastes, often I wished I could turn it off to concentrate on notes more.  The “story” if it can be called that plays out over two music festivals each with several levels to beat. The story feels barren, I had no motivation, and as I jumped from one band to another I felt no connection to the character who perspective I watched the screaming audience from.  Band-mates will at least now chastise you for playing poorly, but the fail mechanic is gone (believe me I tried) so there is no bottom to drop out from under you as there was in previous games.  The full mode took me less than 5 hours to beat, and I only finished it to make sure I had unlocked all 47 of the games stock tracks for free play. 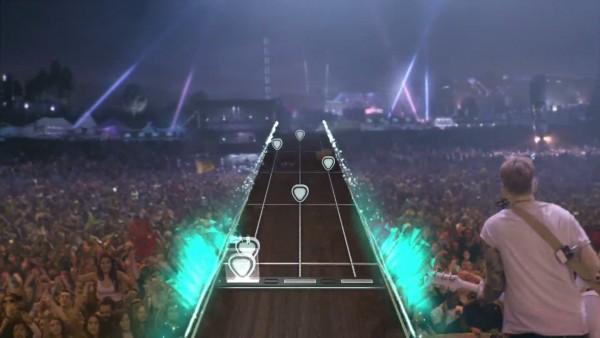 This is the live mode, where the game takes its name from.

The best part of the game is also the part that’s likely to be most controversial.  The second game mode, Guitar Hero TV is designed to prevent the need for massive DLC packs, and to offer a less aggressive monetization strategy for the life of the game.  I can hear the groaning from here, yes the game does have microtransactions for money. No, they aren’t just for cosmetics, in fact if you want to play a song from the GH TV mode, you are given an allotment of free songs to play per day and if you want more, you have to buy them. As we have seen with mobile games in the past, GH live gives you the option to use earned in game “gold” or purchased points.  The upside of this is that the GH TV mode doesn’t revolve around the transactions. Instead there are two channels, each one playing a music video (like MTV used to) and you can jump in and compete with other players online on whatever song is playing at that time on that channel.  This Mode is meant to eliminate the need for pricy DLC, and it accomplishes that at least, rotating a MASSIVE catalog of songs.

Now for the bad news, all your previous DLC for GH won’t work in GH Live. Nor will any previous hardware.  The 100$ starting kit gets you the 43 songs you unlock in the GH live mode, and whatever is playing on GH TV at the time as well as the single guitar, making living room competitions more expensive than ever. Now GH TV has a HUGE variety of songs, all of which are available in free play, but with only 10 plays allotted a day you will burn through they pretty quickly if on your favorite songs while waiting for that half an hour of “classic rock” you can’t stand to finish on GH TV channel 1. The real problem here is the removal of choice, for people with wider tastes in music this may be a fine option but for my extremely narrow tastes I found myself disinterested in playing what was on. This forced me to go to the free play, and after 10 songs I was faced with either buying more plays, or going back to the songs I didn’t really like. The only way to earn in game currency is to play GH TV or purchase the new currency with cash, the in game currency can be used to purchase more free plays, different power ups, and cosmetic upgrades. The other option is the microtransactions.   The microtransactions don’t feel forced, but if you are a heavy player, who likes to master songs by repeating them again, and again, I can see how you might run in to issues.