Do you like Beautiful hand drawn art and simple but challenging combat with massive bosses? Then Jotun is the game for you. The game’s hand drawn art is so beautiful you’ll wonder if you’re playing a videogame or a story book.  Jotun is an exploration game created by William Dubé, originally launched on kickstarter, and now released on steam for $14.99. You play as Thora, a Viking warrior who died an inglorious death (falling off her ship and drowning) and must face the challenges of purgatory to escape and be allowed to enter Valhalla. Along the way she will have to face the Jotun, massive monsters from Norse lore, and explore a wide open set of 6 unique worlds. She fights with the aid of the same gods who denied her entrance to Valhalla barrowing their powers to aid her. Her kit for this massive task, a simple iron axe, with a light and a heavy attack, her wits, and a dodge roll, but that’s all she will need to impress the gods and kill the Jotun.

Game play is simple and straight forward, walk around the beautiful hand drawn maps, dodge a few hazards and solve a few puzzles, and then fight a giant boss. But, to say that it’s simple does it a disservice. Jotun’s game play is complex; to distill it down does it disservice.  I died on the first boss, several times, the difficult level taking me by surprise and being in stark contrast to the beauty of the maps. The boss combat is much more like a Dark Souls, than an action RPG, with a dodge roll mechanic featuring prominently and health management being paramount.  Thora has two basic types of attack, heavy and light and these allow for just enough variation to keep the game interesting. Some attacks can be enhanced by the blessings of the gods.  Even though combat is important, I felt like was not the main point of the game but rather a secondary aspect that added the whole game.

These are the six runes, which you will get when you find the six spirits to help you on your way

I liked the games light puzzling aspects; even if some of them did confuse me (it’s a puzzle it’s supposed to confuse you right?). The puzzles aren’t super deep, or super complex I just tend to be terrible at puzzles. Most are simple puzzles that are one level of puzzle, which is then repeated. But the puzzling is just one part of the gameplay, the major attractor here for most people is going to be the boss fighting. Think of the combat here as a fun cross between Shadow of the Colossus and Dark Souls, I hate comparing things to Dark Souls, but it has to be done for this one. Bosses are all super massive, often requiring the screen to zoom out to fit the boss on it. Their attacks are patterned and predictable, and require skill to dodge, and then go back to attacking.

In this way the game is very like Dark Souls, and like its famously hard friend, it too punishes for not paying attention in combat. Jotun’s primary way of distinguishing itself is that our heroine also gets a set of powers tied to your progress in the game. In each realm you will find the spirit on one of the Gods who will give you a special power to assist you during the game. These abilities are iconic of their gods, for example Frigga gives healing, and Thor a heavy hammer attack with MJLONIR. This brings much needed variety to the combat which would otherwise boil down to just attacking and dodging.  None of these powers are an end all be all and all of the Jotun can be beat without using any of them, making the game feel open and free.

Combat and puzzling are framed by a central hub style of map which leads off each of Jotuns six stages. These stages can be played in any order but the game will punish you for not having a skill or more health, so be cautions. Even with all 6 six of the gods powers lent to you and a full health bar, players will still need cunning, luck, and skill for them to be able to beat the games massive bosses. 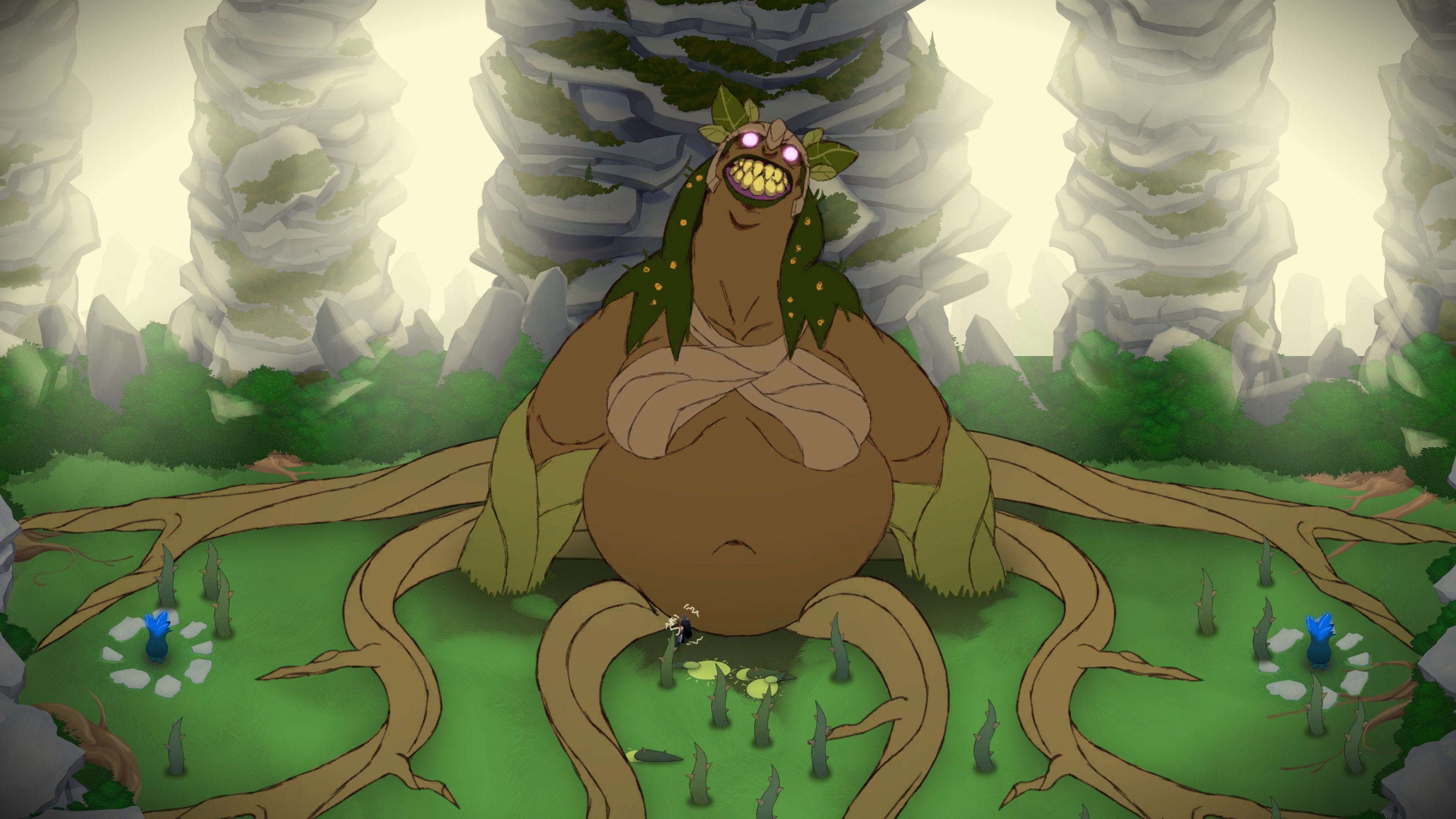 One of Jotun’s huge bosses

Bosses are where this game shines, each of the 6 Jotun are awe-inspiring. They tower over the player and make her seem as small as an ant. Each boss is artfully crafted (still hand drawn) and sometimes I caught myself staring at the Jotun instead of my player, which often cost me my life.  None of the bosses are inherently harder than the other; however the game does Shepard you somewhat in the beginning with lit arrows in the central hub pointing to where you can go for the next level.  This provides just enough direction to make the game not feel overwhelming, and this paired with the map of each stage that is provided makes a game that is quite large, feel a little bit smaller.

Overall I have fallen in love with Jotun, often times when simply exploring the camera will push out, showing a fantastic story book vista, its hand drawn details a real treat for the eyes. I also find myself wanting to call this an action game, but at its core it’s not Yes it is an action game, but it doesn’t center on action, yes it is a puzzler, but puzzles aren’t the main attraction. The game is so much more than the sum of its parts. Oftentimes I feel as though I’m playing an interactive story book, others I’m frustrated as I’m forced to make my third or fourth run at a boss. At least once I put my controller down because I was stuck and just sort of admired the art. That’s the real attraction for me, that the game is more than the sum of its parts. It’s so vibrant and wonderful that just exploring the environments is deeply satisfying. I would recommend Jotun to anyone who is a fan of big beautiful game, casual puzzlers, or intensely difficult action games.