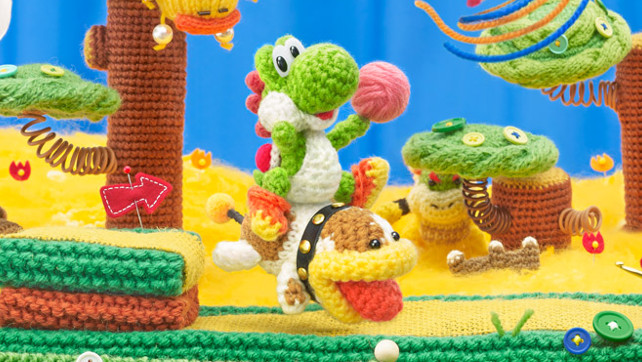 Yoshi’s Woolly World – Set off with a friend* through a woolly world in this grand hand-crafted Yoshi adventure! Kamek, that mischievous magic maker, has turned the Yoshi clan into wool. Now it’s up to you to explore a sewing basket’s worth of clever stages and unravel their secrets to save your fellow Yoshis. Yoshi’s Woolly World will be available on Oct. 16. *Additional accessories required for multiplayer; sold separately.

Final Fight One – Take on the role of Cody, Guy or Mike as they punch, kick and throw down throngs of thugs. In this Game Boy Advance version of the Final Fight game, there are six stages showing a different area of the city, including an extra stage that was not available in the original Super NES version of the game.

The Magic Hammer – The Magic Hammer is an open-world action RPG where you embark on an epic adventure with your Hammer! Customize your character, explore towns, battle in boneyards and roam the open world in thirdperson. Level up to unlock new magical powers, travel to different realms, tame animals and take on greater enemies! Play the entire Story Mode co-op with a friend using Local Play or Internet. The Magic Hammer also features a creative mode that can be played single player or co-op.

Crunchyroll – Now Crunchyroll gives you access to thousands of hours of your favorite Anime for free on Wii! Crunchyroll is the official destination for the largest lineup of current and classic Anime & Manga. Watch hit shows like Naruto Shippuden, One Piece, and Sword Art Online on all your favorite devices. Watch for free or become a Premium member to watch ad-free with exclusive access to simulcasts—your favorite shows available as soon as 1 hour after they air in Japan.

Animal Crossing: Happy Home Designer – SpotPass Distribution – You have a new client waiting! Louie is looking for a home designer in the Animal Crossing: Happy Home Designer game to help decorate his place. Fulfilling Louie’s request will net you new and unique items for your catalog. This gorilla, who is a fan of the Mushroom Kingdom, is available for a limited time via the SpotPass service on the Nintendo 3DS system, so check the in-game Nintendo 3DS system on the second floor of Nook’s Homes to meet him and take him on as a client!