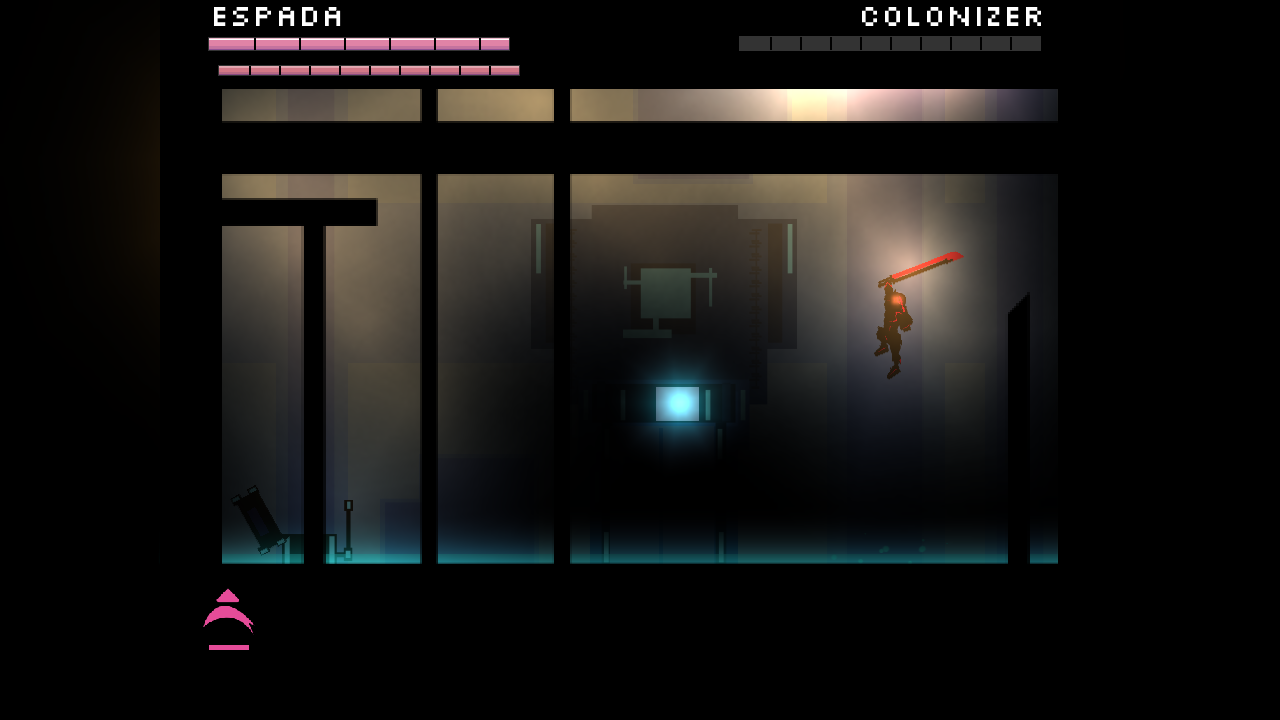 Daily Espada is the newest indie from Pedro Gabriel, pits an ordinary man against Brazil’s most bizarre and exciting fictional game show.  Our hero will be given a sword and a gun and forced to fight against hordes of Brazil’s greatest mythological creatures in exchange for fabulous prizes.  The sword gives our hero the power to transform in a super-sentai kind of way, donning a black suit with red accents that give you additional more powerful combos and a super ability. The gameshow’s rewards are fantastic, and will ensure our heroes family will be set for life.

The first thing I noticed about Daily Espada was the colors, the game features a dark background with beautiful bloom lighting and the colors are fantastic. Unfortunately this can get a little confusing, with the enemies being black, with accents of color, and the player wearing a black power suit with they are transformed. The result is that the only color on screen is the players black and the attack animations, which creates a striking picture consisting of lights and darks. Lighting is sufficient at most times, but more than once I found myself confused by the dark. 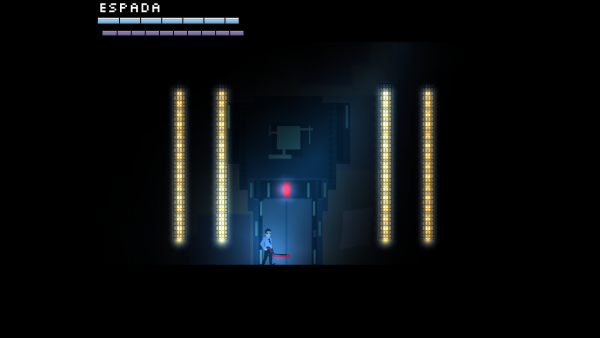 The gameplay feels good.  It’s the best of 2D style hack and slash. Controls are simple, but leave room for both high skill and new players alike. The core mechanics are classic hack and slash, see enemies shoot then and slash them, until they die.  This is fleshed out with a combo system that while simple to use is difficult to master.  Most rooms feature a chest that can be unlocked by defeating its enemies. These chests contain upgrades that get you better and more exciting combos and slashes. The bosses are big, and the enemies in between offer just enough depth to keep the game interesting.  The average boss fight took me about 10 minutes to complete!

The games map is almost like a metroidvania game. A central Elevator corridor houses elevators to each level, the layouts of which are often labyrinthine.  I often found myself retreading the same floors fighting against the same enemies while trying to find a boss elevator, or figure out where the heck I was.  Aside from my inability to remember where I had and hadn’t been the game would benefit immensely from a map, however not having one lends it a difficulty and a mystery that makes for interesting if slightly repetitive game play.

Daily Espada’s story is well told through voiced story bits, emails that you pick up from terminals and signs on the wall.  It’s a simple story told as far as I can tell in 4 acts, one for each boss you fight. The game then gives you the ability to continue on to harder bosses, but to mention more would be spoilers, so go play the game! 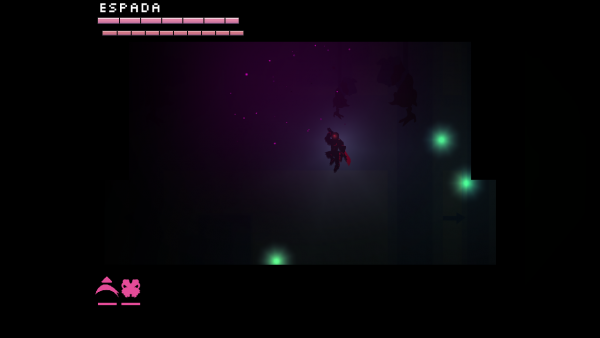 For a game that started   ut as a free tech demo on itch.io this release is extremely well polished, I found very few bugs, and the visuals are nothing short of stunning. The bosses feel huge and even on moderate difficulty levels gave me quite a bit of trouble. I love the colors, and the arcadey sword play is easy to learn and hard to master. The story lacks a bit, with much of it told through text terminals, but for what it is I really liked Daily Espada. There are half a dozen difficulty levels and tons of re-playability built in. The story was short but not lacking, and I was satisfied with the length of the main story (about two hours to play). The game has been greenlit and will release on September 30th and does not yet have a listed price.

A code for Daily Espada was provided by the game’s developer to BrokenJoysticks.net