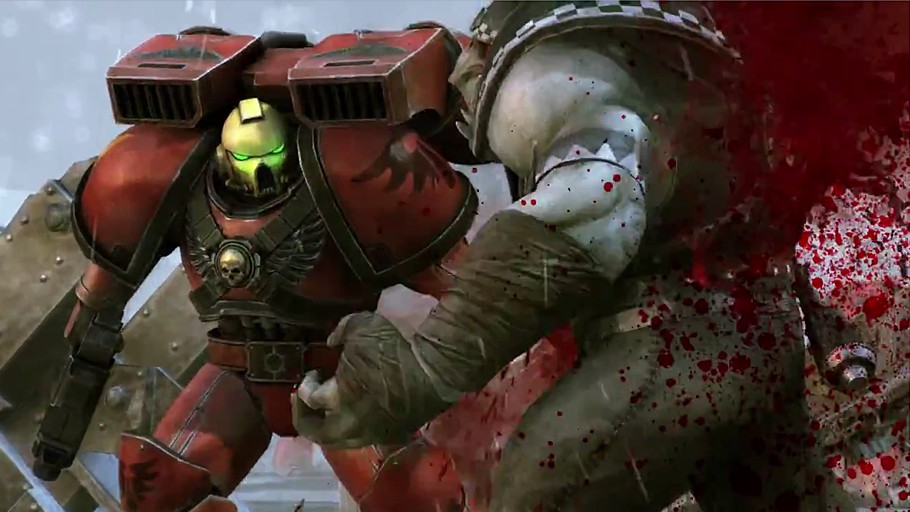 In the grim dark future there is only CHESS?

Warhammer 40K Regicide marries chess and the turn based combat of the Warhammer table top game. The core game play is chess like, but blended with previous entries in to the Warhammer strategy world it takes the brutal game play of Warhammer 40k Space Hulk and frame it on a chess board, mixing in a variety of fun non-chess mechanics, to get an satisfying Warhammer 40K experience.

Blood flies as my knight takes a pawn with a brutal finishing move that reduced the pawn to gore splattered heap. Bolters spit bullets at orks with that trademark sound, and chaos Magiks fly across the board. This is CHESS! But, chess in a brutal future where there is only war 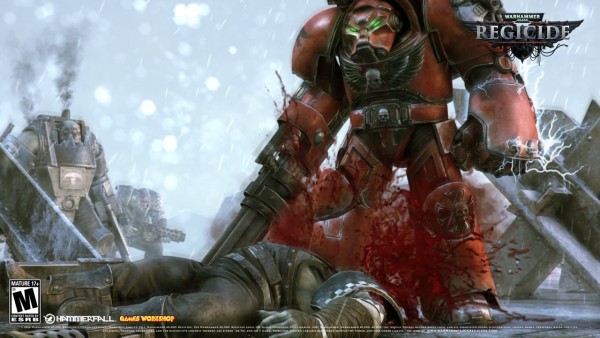 Warhammer 40k regicide is quite a mouthful, but that mouth full has behind it quite a bit of gameplay. The new part of this game is the regicide mode. The classic chess is fun to play with its brutal animations but Regicide is really innovative. Regicide mode involves a full game board of chess pieces, with the Orks playing black and the Space Marines playing white. Game play seems simple, each turn you can conduct one chess move with any piece on the board. After moving your piece you then get three remaining action points, Those three actions are what set regicide apart from any other game out there now.  These action points are spent in this “invitve” phase after you complete your chess move. They consist of shooting, special abilities (every piece but pawns has at least one) and commander abilities. Each piece can also make a second attack called an assault. Each use of an ability or shooting or assault consumes one action and some consume more than one. On top of the pieces abilities there are also commander abilities, these are wide reaching, and consist of adding armor to a piece, shielding that piece, or stunning the other team’s pieces. These abilities are global and can really swing the game. There are a large number of these powers and as you progress experience is earned to unlock more and more of them, though you can only carry 4 in to each match.

I went in to the game with only decent chess skills, but expected to be able to win with just chess knowledge. Although it may be possible chess ability certainly is not the primary driver of this game. Chess captures play a role in regicide, however positioning and commander abilities are equally important. Often what would be a safe capture in chess means certain death in Regicide. Since each piece can shoot, if you move your rook (played on the human side by a Terminator) to take a piece still deep in enemy territory it may die to the guns of the pieces around it. This makes taking pieces much more complex as you also have to be aware that you can “die” to the fire or assault of pieces that are not in traditional chess capture positions. AoE attacks like grenades and buffs and debuffs also affect the outcome of the game..

The game offers a long campaign from the space marine side in three acts. Each mission starts with a brief voiced over story intro. The have different objectives and piece compositions according to what type of mission you are playing. The story is thin but it doesn’t need to be a deep epic story to support the game play, the main story is the same as most Space Marine stories, orcs are here kill them all. Each mission is a specific type, and during the first act (of three) I encountered four main types. The first was annihilation, which involves killing all of the opposing pieces. This is the simplest type of game, just capture or kill all opposing pieces. The second mode is called seek and destroy, and requires you to eliminate a specific piece, or type of piece from the board. The third is seize ground, which involves getting a piece to a location, and the fourth and final is domination, which involves using a special ability to capture a certain piece. The first third of the campaign took me about three hours to complete so I would expect its full length to exceed 8 hours.

Because this is a Warhammer game, army customization is present, there are multiple chapters available which you can select from. By default you will play the Blood Ravens, but the Raven Guard, Dark Angels, Ultramarines, and Space Wolves also make appearances. Some of these need to be unlocked with earned experience. You can also play as the ork army, but who would want to play dirty green skins? Game modes are currently Multiplayer, skirmish and campaign, as well as a short tutorial which I highly recommend everyone complete. I have yet to dive in to the multiplayer but considering how little skill I possess against the AI, I imagine I would spend most of my time watching brutal finishers as my pieces died rapidly.

Warhammer 40K regicide hits its mark; it expertly blends the classic strategy of chess with the feel of previous turn based Warhammer strategy games.  Its lacks only in the campaigns story I did not find myself attached to any of my “pieces” which is probably a good thing because with my lack of skill they kept dropping dead in a rapid fashion. The skill ramps up in a nice slow burn, only becoming terribly difficult in the later part of the campaign. Skirmish mode offers plenty of options for customizing a game including several levels of AI difficulty to practice the title Regicide mode against before going online to match wits and skill with other humans.