Do you like going fast? Do you like hitting balls? What about going fast in a car with a rocket engine while hitting a ball towards a goal? Yes I’m talking about soccer, but not soccer like you have ever played it before. This soccer has supersonic acrobatic rocket-powered battle-cars.

Speed is not something that most people associate with soccer.  Developer Psyonix looks to change this with their mass market sequel to the PS4 exclusive supersonic acrobatic rocket-powered battle-cars (SARPBC). That game, called Rocket League is a direct sequel to SARPBC with a similar gameplay concept. Players take control of a sleek race car (rocket powered of course) and drive it around an enclosed soccer field to try and score goals. Sounds simple right? It is made more complex by the fact that the walls and ceiling are bounded by a force field, so the ball can never exit the play surface. This keeps games fast and wild, cars drive along the wall the ball hits the ceiling and the action never stops, except when a goal is scored.

Each game lasts 5 minutes and the gameplay is similar to classic soccer. Players drive around and hit the ball with the car to move it, and jump to hit the ball if it’s in the air. A system of aerial tricks and maneuvers which can change the direction and speed of the ball lend the game a depth and complexity that take it to a higher level than just basic rocket car soccer. These “tricks” are further enhanced by a second jump during which you can also execute a sort of boost maneuver, making your car flip or spin and thus hit the ball harder, farther, or with more directional finesse. This is where the real skill comes in to the game, and what kept me coming back for hours and hours and hours. 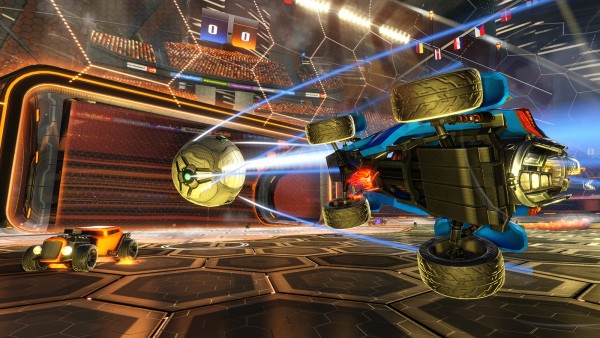 Rocket league is a game that on the surface seems so simple, but the unseen depth and sheer insanity of the game had me in stitches. It feels so good to boost across the map, jump, and flip the ball in to the goal. It just as good if not better to catch a ball on the tip of your car as it flips over just inside your goal and push the ball back out for a save. Even the slightly wonky physics feel great. The ball seems over light for it size, but you get a satisfying explosion when it goes in the goal that blows all of the cars backwards, making it feel like you really smashed the ball home.

Cars are fully customizable, with paint colors, emblems and hats galore (thanks valve!). With over a dozen base cars, it’s rare to see the same paint job and car as your own. Decals, color variations (orange and blue teams) and different types of paints go a long way to making your car feel like its unique and not just a cookie cutter hot wheel.

There is no shortage of games modes to try out. Online play is what will attract most people to the game; competitive modes exist for teams of 1, 2, 3, and 4 players. There is also a newly added ranked mode featuring singles, double, and triples. The map sizes are the same for all modes so the 4v4 mode is rightly titled “chaos” as putting that many cars in small space results in the aforementioned. I prefer the teams of 3, it’s still fairly crazy but much less so than 4 is. There is support for private matches as well as a season mode where you play against the AI. With 3 levels of difficulty and the ability to take others in to your season with you I have only managed to scratch the surface of possibility with this mode. The AI has plenty of depth and setting it on the hardest setting will make you want to smash your controller.

Training modes exist but don’t expect them to prepare you for the real game where human controlled cars are unpredictable and occasionally disregard the ball for the fun of ramming and blowing up other cars, it’s this element that truly makes the game fun. Althought I was unable to experience the higher levels of matchmaking (I am such a noob) I can only imagine they mostly involve flipping, hitting balls, and exploding cars with a level of finesse well beyond my own skill. 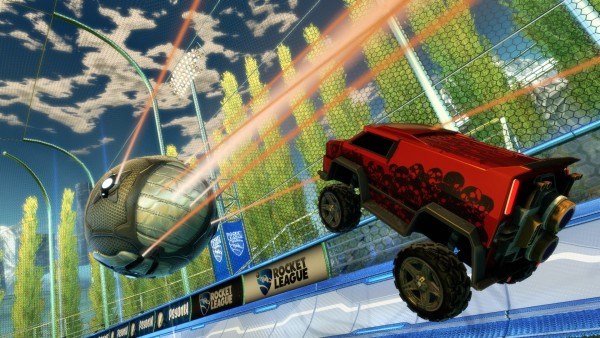 Another attraction is cross platform play, The game originally released on PS4 followed by a general steam release, and PS4 players can now enjoy cross platform play with steam users. The games UI makes inviting steam players easy, with just one click. PS4 users have a bit more work ahead of them with PC users having to first create a party and then invite through the network that the developer has set up. Slight difficulty aside Psyonix has made cross platform play much easier than I have seen in other games.

The only thing I could find to gripe about in Rocket League is my only lack of skill. Games can be very one sided with scores often going to 6 or 8 to 0. This rage inducing one sided-ness of some matches causes a fair few rage quits, and since there is no penalty in non-ranked games for leaving, I occasionally found myself left with only AI team mates by the end of a match.