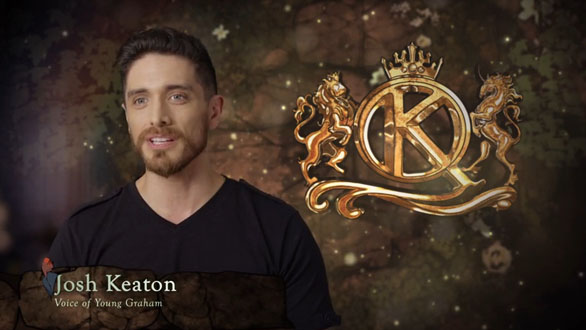 We knew King’s Quest was going to be a great adventure back into the world many of us old school PC gamers know and love, but todays development diary shows us an amazing cast of incredible actors lending their talents to the game! Right from the start, we’re introduced to the elder version of King Gram, voiced by… Christopher Lloyd! Doc Brown himself! The man I’d love to hire for my own productions if I had the choice! That’s just the start too!

King’s Quest was exciting before, but now it feels like a new high budget animated release. In general, the new Sierra has always said they’d support indie developers in making new games. Between Geometry Wars 3 and King’s Quest, Sierra has become a huge beacon of light for bringing talented developers even further.

Here is the press release highlighting the other stars that will bring King’s Quest to life:

Playing the young Sir Graham, Josh Keaton is a TV, video game and film actor who starred as Peter Parker in the critically acclaimed The Spectacular Spider-Man animated TV series and Valerian Mengsk in the StarCraft II series.

Playing King Graham’s inquisitive granddaughter, Gwendolyn, Maggie Elizabeth Jones is an up-and-coming young actress best-known for her work in We Bought a Zoo and TV’s Ben and Kate.

The new King’s Quest unfolds as an aged King Graham looks back on his greatest journeys with his granddaughter, sharing the untold tales of his youth for players to experience firsthand. The game will feature the same exciting blend of exploration, puzzles and wit fans of the series grew up with.