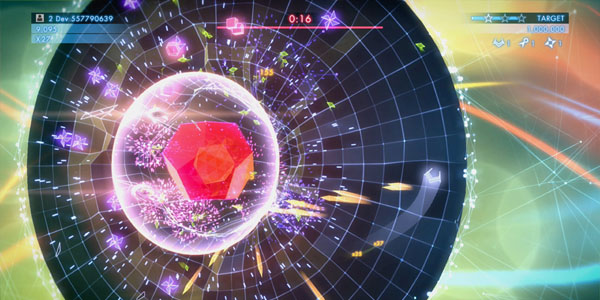 Geometry Wars 3 is great! Lucid Games not only made a fantastic next chapter but even added to it recently with a free upgrade that made the game more accessible and added 40 new adventure mode levels. FORTY NEW LEVELS! FOR FREE! The best part about that is, as basic as that may sound, each level in Geometry Wars 3 plays like it’s own gameplay mode. Giving you a stage, main theme, and unique general setup to each. That’s on top of all the levels already included in the game. Craig Howard of Lucid Games joined Darkain Arts Gamers for an interview. Here’s what we discussed.

What originally inspired the new 3D arenas and did you expect them to flow as well as they do?

CH- We dabbled with 3D when working on Retro Evolved 2 to a minor extent, and the idea of moving into the third dimension has since always stuck in our minds. I think it worked well as we were able to keep the same speed and movement in the 3D maps retaining the authentic feel of Geometry Wars.

With an established history, it would have been easy to make a sequel that was just more of the same. How difficult was it to get the style of Geometry Wars so accurate, but develop it into Dimensions new unique content?

CH- After 2 we didn’t just want to make another game that was very similar, that’s one of the reasons why there has been such a gap between the games. We created lots of mini prototypes and concepts over the years and when we felt we had enough cool new ideas we then started to create Geometry wars 3 Dimensions.

What encouraged Lucid to make such a vast update for Geometry Wars 3?

CH – We wanted the game to make an impact in the way the others had. As fans of the genre we wanted to do a game that contained a huge range of interesting gameplay experiences for fans of the series.

I was excited about the new content of course, but even more thrilled that your team really listened to reviewers and even added an easier progression system. Don’t get me wrong, I personally loved the challenge but I found my skills wearing down by about 3/4ths through adventure mode. Was it a difficult decision to make that change? I’d imagine as much as it opens up all the content easier for many players, it would also alter your original design concepts for how gamers would replay your levels.

CH – Feedback is very important to us. The star gates were there to stop people progressing too quickly, but in hindsight they just stopped players getting more experience in the game.

I did like the change with the star progression, and I do think levels stand out as unique gameplay modes on their own to keep players going back and replaying their favorites. Even similar modes have unique experiences depending on their arena. Thanks for that, and for such a large update to your game! It really made a great title into a fantastic one! Thanks very much for your time.

CH – Thanks for this look forward to battling on the leaderboards 🙂

Yes, I’ll admit too, I didn’t realize at the time that Craig Howard had indeed worked on the game I’ve sunk far too many hours into, Geometry Wars 2 back when he worked with Bizarre Creations. So there is a very good reason Geometry Wars 3 does such a wonderful interpretation of the series! It’s fantastic to see the series is still evolving to this day and staying fresh.

Geometry Wars 3: Dimensions Evolved (which features the free update already included) is available for PlayStation 3 and 4, Xbox 360 and One, as well as on PC. It’s definitely worth checking out!