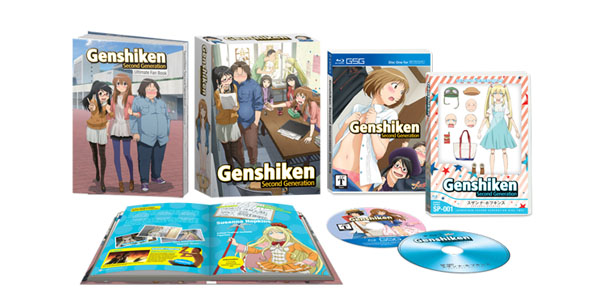 We’re still wrapping up our coverage of NISA’s Ground Control To Psychoelectric Girl, but in the meantime Genshiken Second Generation was released today! The anime about an eclectic group of otaku college students’ premium edition includes 2 Blu-ray discs, with 16 minutes of Bonus Shorts. There’s also a 64-page hardcover art book included! The book itself sounds quite nice with episode guides, character info, and even interviews with the cast members and production staff! Read on for NISA’s official press release info.

It’s a new semester at Shiiou University, and for “The Society for the Study of Modern Visual Culture,” AKA Genshiken, that can only mean one thing—new freshman recruits! Originally founded as a club for otaku to discuss their unabashed love of anime, manga, and video games with one another, the current president of Genshiken, Chika Ogiue, may have bitten off more than she can chew by recruiting a bunch of yaoi-obsessed fujoshis, a.k.a. “rotten girls,” to join their ranks! Meanwhile, the original members of Genshiken who have since graduated find themselves coming to terms with their new lives as productive members of society.