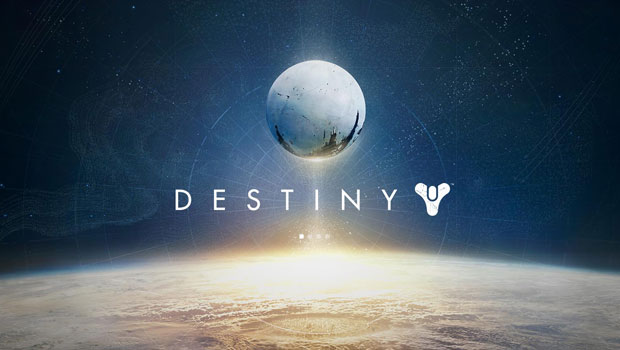 Destiny quickly become one of the most pre-ordered titles in recent memory and of course it was backed by one of the largest marketing campaigns we’ve seen in a while for a videogame. Needless to say expectations for Bungie’s first post-Halo release reached into the stratosphere and after playing Destiny for quite some time I’m ready to render my verdict. Should you forge ahead into the stars and join the ranks of the Guardians or pass at being an interstellar savior?

Instead of playing as a pre-determined space marine you are actually able to outfit your guardian with some of your own charm right from the get-go. Whether you want to be a male guardian with hot pink hair or a female protector of the galaxy with a shaved head, the choice is yours. However during player customization after getting my avatar just the way I wanted her I found that for in the majority of my game play sessions her gorgeous brown hair was covered with whatever piece of gear I had equipped. Couple this lack of facial visibility with fairly limited customization options and right off the bat I was left wanting more from Destiny, and I hadn’t even used my trigger finger once!

Upon creating your character you are able to chose one of three different classes – each of them have their own drawbacks and benefits. There’s the agile Hunters who specialize in stealth kills and the use of sniper rifles. Next comes the Titans who specialize in dealing heavy damage and have access to a devastating punch as their default melee attack. Lastly is the Warlock who are able to utilize the Destiny universes’ version of magic to cast buffs as well as launch create devastating firebolt grenades. Each of these three main classes branch out into a minimum of two sub-classes providing players with a bit of customization. During my time with Destiny I chose to go the hunter route with a focus on sniper rifles as my secondary weapon with a primary focus on automatic rifles. 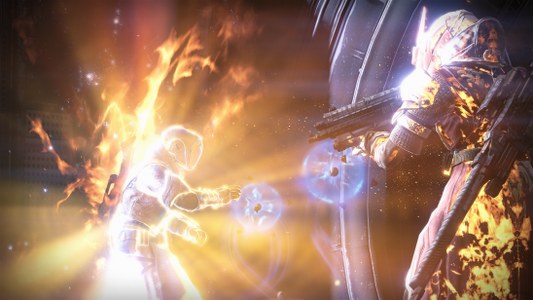 The gunplay on display in Destiny is very tight, as is to be expected from a developer of Bungie’s caliber. All of the weapons I tested out during review felt powerful in their own right and appropriate for different situations. A special shotgun I picked up that used flame rounds would incinerate enemies up-close but was next to useless at long range, a bolt action sniper rifle (my first uncommon green drop) took out most enemies with one shot to the head from several dozen yards away and the super powered  hand cannon that I unlocked late game did some truly devastating damage. Just like their prior FPS titles, the world of Destiny is filled with interesting weapons that accommodate a number of different play styles.

Destiny’s art direction also deserves special mention. Even on last-generation consoles the vistas and environments are simply gorgeous and during my time with the game I never noticed any slowdown even with a dozen enemies on screen at once.  The weapon models were also top notch, each type felt distinct with their own different firing mechanics.  Unfortunately there isn’t as much variety in terms of exotic weaponry, there’s nothing as exotic as say the covenant needler or pulse rifle, everything feels grounded in real world weaponry and this can detract from the science fiction vibe that Bungie has strived to create. 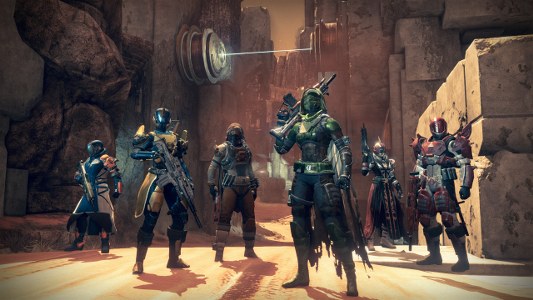 In terms of game modes there isn’t a traditional offline single player experience to speak of. Destiny‘s game modes are best described into two categories: Player Vs Player and Player Vs Environment. If this sounds a lot like an MMO, that’s because Bungie has taken a quasi-mmo approach with Destiny, more on that later. There are several loosely connected story missions that can be under taken on your own as well as strikes & raids which require you to party up with other guardians to take on dungeons of increasing difficulty.  Story missions are fun at first as the first few hours will take you from an old worn out industrial section of Russia all the way to the frickin moon! But repetition slowly starts to creep in as you are forced to repeat the same story missions several times in order to level up your character high enough to begin the next story mission. Any fan of Bungie’s previous works can attest to how fun their approach to a sandbox shooter can be and Destiny‘s PVE features that distinct player vs a large group of enemies that made so many of Halo’s single player missions so enjoyable. Player Vs Player comes in the form of the crucible, the multiplayer arena. There are several different modes  available from your standard death match, team death match to capture the flag. As with the PVE environments crucible maps are gorgeously crafted but the actual head to head combat feels lacking. There’s nothing really special about multiplayer combat in Destiny since every guardian brings their weapons over from PVE there’s very few power weapon spawns or other notable spots to rush during an intense firefight. Since everyone has brought their best gear to the multiplayer arena there’s also the loss of that feeling of equality found in Halo when everyone started with just an assault rifle. 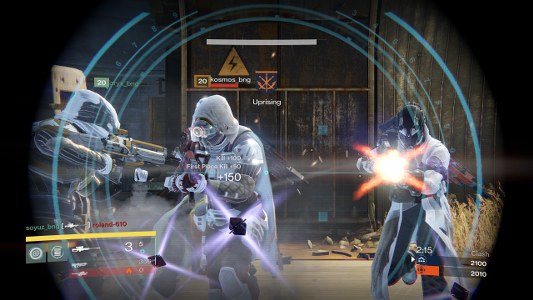 I think I’ve dodged the elephant in the room for long enough. With all of the praise I’ve given Destiny in this review you might be wondering why some of the scores at the top of the page are so low. The truth is that the MMO elements that Bungie has tried to squeeze into their particular brand of first person just doesn’t work all that well. Whether it’s the paper thin story that’s dished out via voice logs or the small narrative cut scenes that precede Crucible matches everything feels spread out as thin as possible in the name of keeping the player coming back to the game. Repeating a failed mission is one thing but having to complete the same story mission three or four times just to progress in the story becomes tedious. The same can be said for the acquisition of gear, in an MMORPG I don’t mind changing out gear every five or ten levels because I’ve acquired my latest set in a zone that is atheistically different from the one that preceded it. In Destiny the same type of gear progression exists but the repetition of the story mission or strikes makes gear hunting much less appealing.

Another issue that became readily apparent, and one of the reasons I’m publishing this article in November, is that server stability caused problems during our review period. Most of these issues have been resolved as of the publication date of this article but while I was playing the majority of Destiny for my review disconnects were quite common. In fact for an entire 24 hours during the review period the game’s servers were unavailable which made the game completely unplayable. Destiny requires a persistent connection and should your internet drop or Bungie’s servers suffer an interruption the game stops functioning. This probably won’t dissuade most potential guardians from picking up Destiny but it is worth noting as it affected my enjoyment of the game.

At the end of the day Destiny tries to reinvent the first person shooter into a persistent online world and as the launch window showed us we’re just not quite ready for it. Connection issues aside those expecting a grand space drama ala Halo will be sorely disappointed with the rather weak plot. The repetition of single player missions and the constant cycling of gear probably won’t go well with anyone expecting something similar to their other games. If you’ve got four other people to play Destiny with there’s a ton of fun to be had here but in the end it just wasn’t for me.