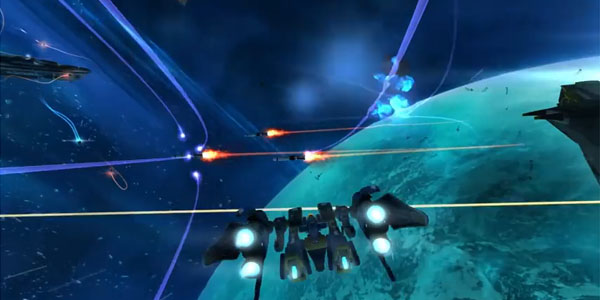 April 8th will see the release of Strike Suit Zero: Director’s Cut which among graphical improvements will also improve on the original in various other ways. As a download title for PS4 and Xbox One, the Director’s Cut will be available for just $19.99! Strike Suit Zero is a proud Kickstarter success story. For more details and the trailer, read on!

First off, here are the new versions details straight from the creators at Born Ready Games.

The Director’s Cut features a restructured campaign – particularly relating to the first few missions, allowing the player to get in the cockpit of the Strike Suit much earlier – with an adapted story and all new dialogue. We’ve also given the game a complete graphical overhaul, including upscaled ships and updated textures and lighting. We’ve also included the Heroes of the Fleet mission pack, and both the Marauder and Raptor Strike Suits. We’ve taken a year’s worth of comments and suggestions on board, too, directly addressing the points of our community and critics.

Below you can check out the trailer and be sure to check out the site as well! You can even view a 3D model of the U.N.E. Strike Suit on the site. A PC version is planned for release later this Spring.