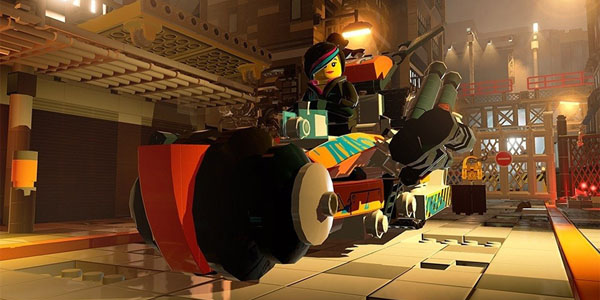 Based on the fantastic LEGO Movie, it’s easy to fall in love with the video game adaption. While it doesn’t have as large free roam areas when you’re not in levels like more recent LEGO games have, what is included is fun to explore. The LEGO Movie Videogame is an great companion to the movie with many wonderful moments and some new gimmicks to the gameplay you’re used to.

You start the game as Emmet, a happy little construction worker guy who is completely content trying to fit in by acting like everyone else. In this sense he is a unique character to play as in a LEGO game. While most characters can construct a pile of bricks into a meaningful device, Emmet falls flat on this, sometimes even with funny results. He’s not really creative. However he can use instruction pages that resemble traditional LEGO building set instructions to make things others can’t. There’s even a mini game that gives you a wheel of parts and you need to select what one the current item being built needs in a time limit to earn extra studs. It’s actually quite clever, especially watching the parts fall together and make something on the instruction page.

On the other side of the builders, we have master builder characters like Wyldstyle who is the girl with the stripes dyed in her hair. She’s the creative type and can make those piles you’re used to building up into neat objects to assist your progress. Not only that but master builders can stand on green circles and highlight three green outlined objects to throw together into something useful as well! These neat additions are appreciated for gamers who have played many of the LEGO games before. 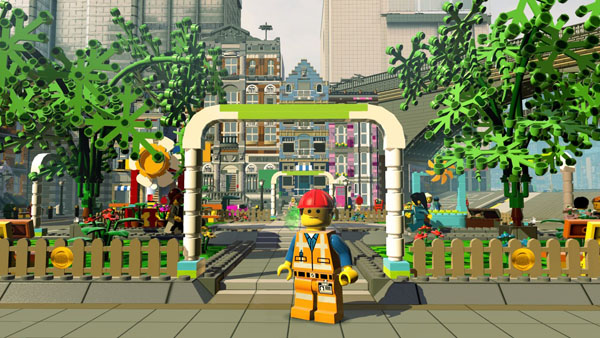 The areas involved are great levels based on movie scenes. Thankfully there are even some nice action scenes included for the movies chases. Movie clips also tie in well to blend the story along. You don’t seem to get as much character build up in the game, but really you’re probably supposed to have seen the movie already, not really be enjoying this game on it’s own. Not that you can’t, but you may not get the full effect of the story otherwise.

I’d liked to have seen move of the areas alluded to in the movie. There really could have been a bit more creative license used throughout but thankfully what is here is quality content. I’m not positive but it does seem the game even includes original in level dialogue from the movie’s stars. It really is a nice touch if these lines are added in just for the game. 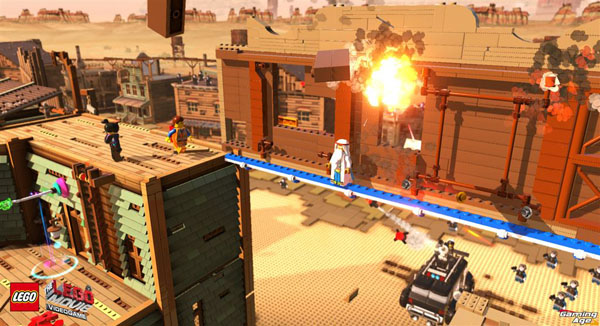 The game does really look good too! Regardless of if you’re playing on a next gen console, or the Xbox 360 / PS3, things looks nice. Mind you there may be more gloss in the next gen versions but levels like the wild west rooftops especially really stand out on all versions. There is a lot of detail to the games background as well. It really does feel like the game was made with strong connections to the movie creators. Staying true to the film, it’s great to see so many LEGO blocks used in the levels as well. Unlike some previous games that featured non-LEGO parts, much of the game if not all is LEGO bricks. From water drops which consist of clear blue studs, to explosions and smoke which are billowing piles of blocks, it truly is a LEGO universe.

As with many LEGO games there is an assortment of minifigure characters to play as and replay levels with. This does help the replayability and adds a reason to go back to the split up hub worlds that make up the free roam areas of the game. The only down side on the older gen consoles is that loading times can be a bit more lengthy than usual. It is worth it once you get into all the detailed levels however. There really is quite a lot that goes on in each level and the more recent checkpoint system is included to allow you to save and continue later if need be. 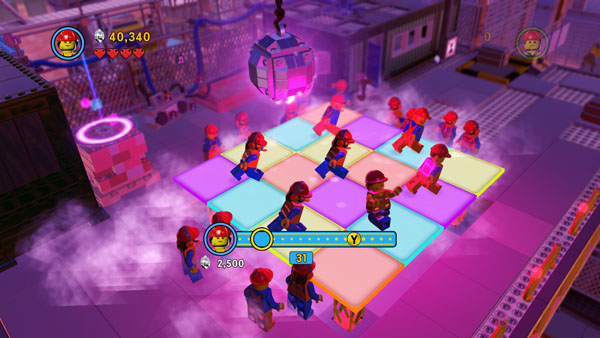 If you loved The LEGO Movie, odds are you’ll enjoy the game. It’s a fun adventure to play through and getting to bust up some of your favorite movie scenes for studs is fun. The chase scenes add some variety to the game and are definitely an added bonus that captures the excitement of the movie. With new additions and seemingly more in level animations than ever before, there is a lot to enjoy in The LEGO Movie Videogame.