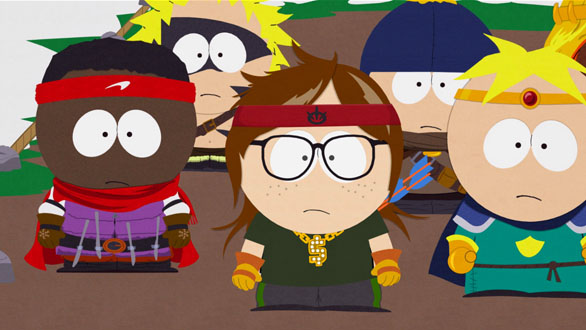 South Park is an incredibly accurate gaming experience. The style is exactly like the show and it flows so well between cut scenes and regular gameplay. Exploration in the open world of South Park makes the game just a joy to experience. You really are the new kid in town and the game does a fantastic job of making you feel like a character in the show itself.

It’s ridiculous just how entertaining it is to go from house to house and explore. The game is so much fun in this way, I’m already craving Halloween DLC, unless there is something like that in game and I’m just not there yet. This really is your own living, breathing version of the show. So much so that you’ll get distracted away from the RPG elements rather quickly. Even their implementation is well thought out. 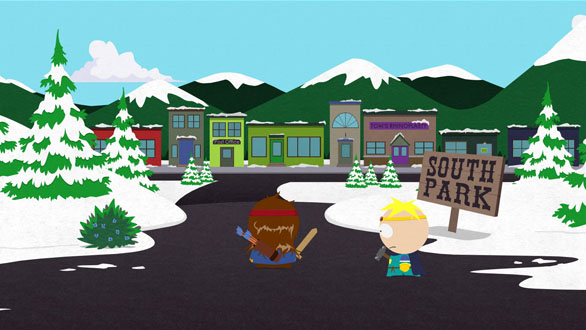 You’ve probably heard but the games title refers to a ‘capture the flag’ sort of item. The Stick of Truth is what both sides want to own for their team. Everything however is in this cloak of make believe and that’s where the game really shines. In combat, you really are play fighting… Bleeding and foes laying on the ground aside that is. There is an air of pretend to this game the kids are playing, and it really can take you back to your youth.

As the new kid in town, your parents allude to some mysterious things about your past and then kick you out the door to make friends. How do you do that? By adding them to Facebook of course! Everyone in the world seems to have a cell phone, just like in real life! So your menu screen allows you to see your mock Facebook page as well as your collectibles, which include friends. You collect friends. Usually when you talk to someone new you may send them a Facebook friend request. Then when you check your page, you’ll see if they’ve accepted you. Don’t get me wrong, this is actually all in game. You’re not pestering your non-game friends via real social media. In game friends even post items occasionally to your wall which can work as hints to your current quest. 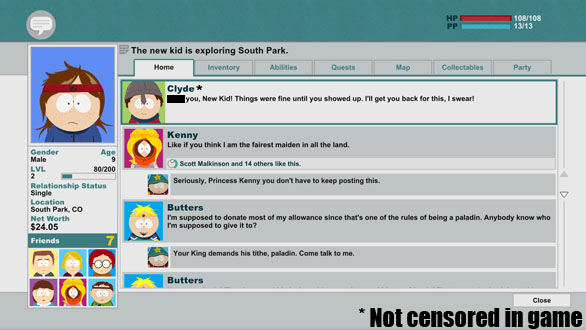 If that doesn’t have you sold already, the game is fully voice acted. So in exploring this world, you really do feel like you’re just experiencing the show itself. That and the items you find are just seeped with in-jokes. You’ll see posters and the like referencing episodes, pick up items that are mainly just to sell that have flavor text jokes in your inventory, and even hear familiar music in the background of stores!

There’s tons of stuff in the world to hit with your weapon or fire arrows at. Breaking or knocking over objects can net you more items. This makes it a joy just to run up and down the street bashing things. Combat can be affected this way too, allowing you to get in a first strike on a group of foes, or even fire an arrow at them to stun someone before battle. You can interact with things too like opening doors and containers. 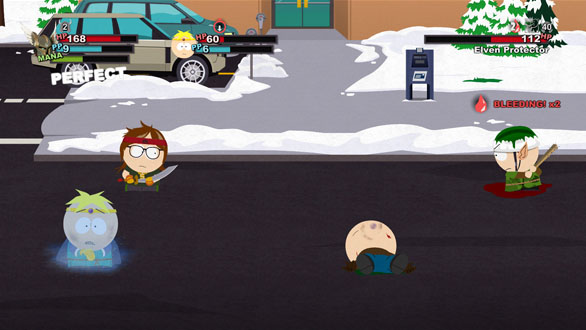 The references scattered throughout go deep into South Park’s lengthy back story. This game has so much to offer for hardcore fans. It’s clear the game is a labor of love, including a rich mix of nods to many of the shows moments and locations. Make friends with some of the characters, and you’ll be wandering their house and even talking with their parents. It’s all here! Go upstairs and check out their rooms to see familiar items from the show.

I’m eager to see just where the game is going to go from here. The RPG elements are fun, but the true strength of the game is in the content itself. As referenced above, something like a Halloween DLC pack would be amazing. Just letting the new kid wander the town and see what everyone else is dressed up as while going door to door collecting candy. It’s the simple pleasures of not knowing what’s down the street that make The Stick of Truth so much fun! It has been noted that episodic DLC is on the way and the first three will be timed exclusives for the Xbox 360 version.

Back to the game though, as mentioned you are the new kid. He’s a guy. You have many options though to dress him as a girl both in the character generator and in game with vanity items. About the only thing you can’t change is the skin color you choose at the start, and even then I just may not have found the item(s) for that yet. It’s a shame you can’t play as a girl, but your character really doesn’t make any noise anyway. I’m not even sure if he makes a peep when hit in combat. Everyone does reference that you’re a guy though. 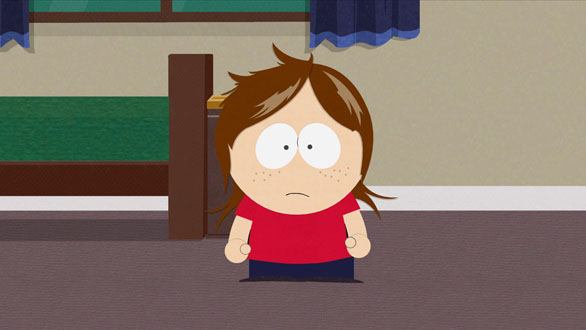 You’ll make friends, enemies, and in general feel like you’re a new character in the town of South Park. The game actually drops you in and gets you started with the guise of going outside to make friends. This is where you quickly meet some of the games main cast and start getting used to the controls of their make believe game. You’re given the choice between four classes. In typical fashion for the shows comedy you can be Warrior, Mage, Thief, or Jew which Obsidian explains as a Paladin / Monk class. 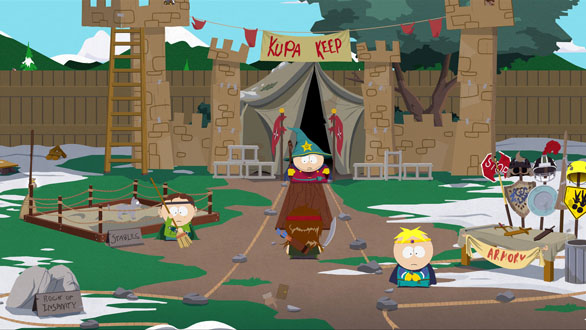 Combat itself focuses on a Mario & Luigi sort of system allowing you to block at specific times for reduced damage or attack at the right moment to score bonus damage or additional hits. It takes a few moments to get used to, and you do need to pay attention to what button you’ll want to press for each attack in it’s description text. Battles are surprisingly involved, having you pay attention to your foes stance, their armor or shields, and what they’re attacking you with. You have regular and heavy attacks, special abilities, summons, and ranged attacks at your disposal. You’ll also have one support character along the way starting early on.

Your gear also customizes your characters look. So whatever armor you pick actually shows up on your character. Of course it’s fun to just play dress up and ignore the fact that you have many quests to complete out there in the world. Between collectibles like Chinpokomon and all the loot you’ll discover it’s so easy to forget what you’re doing and just enjoy the world. The town even has fast travel points but it’s more fun to just run around and get into fights with your rivals, shake down parking meters for change, and fart on people passing by to see what they say. Really! Half the fun is running into stores and farting at those within to see what they reply with. 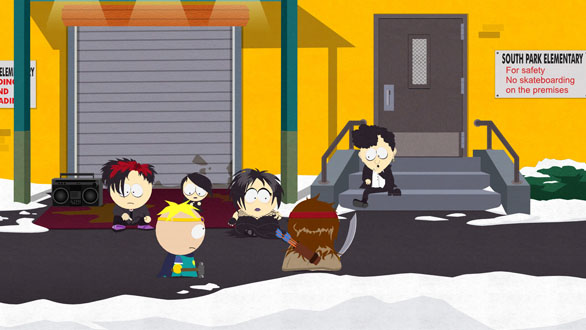 There’s just so much going on here that you’ll want to share it with your friends. Get everyone together and just enjoy this game. Together there’s better odds someone will remember each of the references and it’ll make for some great memories. Yes, there’s swearing and inappropriate jokes. It’s South Park! Of course there is. This is also one of the most accurate games ever made based on an animated series. When I first heard Obsidian was making a South Park game I was thrilled, but didn’t expect it to be so much like the show. I love Obsidian games, and figured it would be a great RPG. I didn’t expect a South Park simulator, and that’s really what makes this such a quality production. Was it worth the delays? Very much so!

As a final additional note, I played the PC version of the game. I’ve seen some reviews online so far that note bugs in the game. So far I’ve logged six hours and haven’t experienced a single bug yet. *fingers crossed* Hopefully it’s just some rare hardware conflicts or something. That’s why my review doesn’t reflect any errors in the game because I haven’t seen any personally. 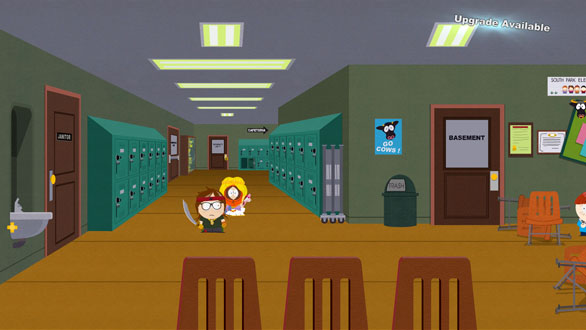