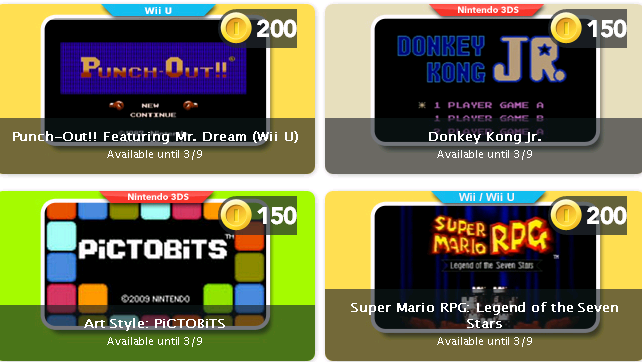 Here are the details about the featured February Club Nintendo games:

You’ll be hooked on Nintendo’s version of the sweet science. In this Nintendo arcade classic, guide boxer Little Mac from the underdog in undercard bouts to contender for the World Video Boxing Championship! Battle your way through 14 thrilling matches, Fight unique opponents who bring different quirks and special abilities into the ring.

Punch-Out!! Featuring Mr. Dream can be downloaded from Nintendo eShop on the Wii U console for $4.99. For a limited time (until March, 9, 2014) Club Nintendo members can get a download code for just 200 Coins.

Go on an epic fantasy adventure with Mario and the Mushroom Kingdom gang. Mario and Bowser team up for the first time ever to tackle a greater evil; Gain experience and recruit new party members as you journey across the kingdom; Deep RPG gameplay with an accessible twist can be enjoyed by players of all ages.

The tables have turned for Mario and Donkey Kong—so it’s time for an ape jailbreak! Mario has imprisoned Donkey Kong in cage (and after their previous encounter in the classic Donkey Kong, who can blame him). As the game’s title character, it’s up to you to liberate your primate paterfamilias!

Donkey Kong Jr. can be downloaded from the Nintendo eShop on Nintendo 3DS systems for $4.99. For a limited time only (until March 9th, 2014) Club Nintendo members can get the download code for just 150 Coins.

Combine megabits in this fast-paced mix of puzzle action and NES nostalgia. Perfect for fans of puzzle & classic Nintendo games; Use stylus controls to solve fast-paced puzzles; Earn coins to unlock harder stages as you progress.