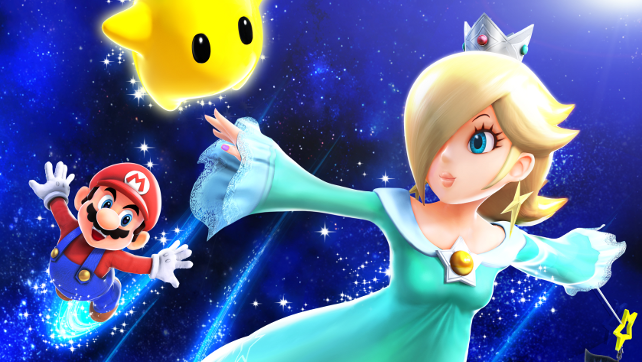 Rosalina, who was introduced in the wildly enjoyable Super Mario Galaxy games for Wii, will be a playable character, accompanied by her starry friend, Luma when Super Smash Bros. launches on the Wii U and Nintendo 3DS in 2014. Not only that but she will also be playable in Mario Kart 8.

I am personally thrilled at the addition and am glad that Nintendo keeps revealling new playable characters for Super Smash Bros. There can never be enough characters to battle it out with and I am also hoping that there are plans to release even more as DLC after the games release. I don’t care if they are paid or free add on characters. The more the better!

New playable characters in Mario Kart 8 include Rosalina as well as various “Baby” Nintendo characters, like Baby Mario, Baby Luigi, Baby Peach and Baby Daisy. New course settings shown in a new gameplay video include an airport, the desert and high in the clouds, and vehicles including UFOs, four-wheel ATV buggies, standard karts as well as bikes.

Mario Kart 8 is set to launch on the Nintendo Wii U this spring while Super Smash Bros. will be released on the Wii U and 3DS later in 2014.