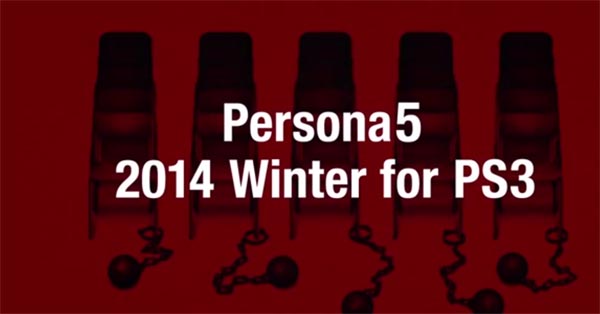 Atlus has released a very cryptic trailer for the newest entry in their Shin Megami Tensei franchise, the highly anticipated Persona 5. A very brief trailer was posted online today, which reveals little about the title. In the less than minute long trailer we see five chairs fade into existence against a red backdrop. The only readable text (for those not fluent in Japanese) teases us about being slaves and craving emancipation – honestly we are just as confused you are at this point.

Persona 5 is currently in development and is scheduled to release sometime in 2014 for the PlayStation 3 in Japan with no solid details for a western release. Those of you hoping for a next-generation Persona are out luck for the time being, but this move shouldn’t be a surprise to anyone.  The last main game in the series, Persona 4, was released on the PlayStation 2 in 2008 – two years after the release of the PS3! It was also ported to the PlayStation Vita with several improvements as Persona 4: Golden last year.