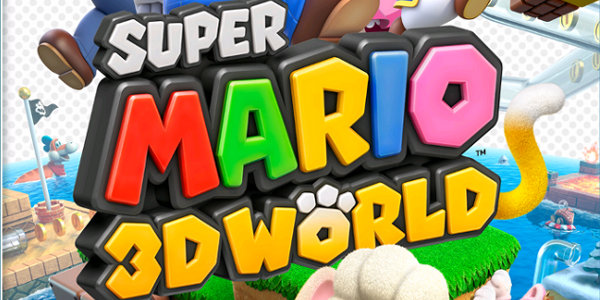 Four Players + Three Dimensions = Super Mario Fun Work together with your friends or compete for the crown in the first multiplayer 3D Mario game for the Wii U console. In the Super Mario™ 3D World game, players can choose to play as Mario, Luigi, Princess Peach, or Toad. Each character has unique abilities and play styles. For example, Princess Peach glides over gaps, while Luigi has his trademark extra-high jump. The new cat transformation allows players to run on all fours, pounce on enemies, attack in midair, or use their claws to scamper up walls and goal poles. Explore colorful 3D environments filled with obstacles and contraptions like transparent pipes and vertical conveyor belts, which add new puzzle elements. Use the Wii U GamePad Controller’s touch screen to search for hidden blocks and freeze enemies in place.

EDGE is the second of three Two Tribes classics to arrive on Wii U eShop. Other games in this range include 2D puzzle platformer Toki Tori and 3D puzzler RUSH. In EDGE, the award winning retro inspired platformer, players take direct control of the cube and roll their way around the game’s dozens of levels. Search for all the prisms, find the shortcuts to improve your times.

Dive into the universe of the Mysterious Cities of Gold! Play Esteban, Zia and Tao through numerous tricky levels full of puzzles, traps and stealth phases in a wide variety of diverse gorgeous settings. Explore every nook and cranny of China, and escape the children’s enemies, searching for the local City of Gold. Faithful to the story-line and art style of the famous Mysterious Cities of Gold anime cartoon, Secret Paths lets you dig deep in this wonderful cross-media universe. You get to play with all the main characters, and each hero has his own special power that you will need to use smartly when approaching the different challenges. Pick between them wisely – Their personality matters!

A new type of gaming challenge, from the creators of RollerCoaster Tycoon 3 and LostWinds. Coaster Crazy Deluxe takes you on a journey around the world (and to the moon) to build a cash-making coaster empire with ever-more insane creations. Unlock more special pieces, coaster cars and track types that let you earn even more cash, and meet the fiendish challenges posed by the Crazy characters in the game.

The savings continue! Starting today, select games featuring your favorite blue-helmeted hero Mega Man are available at a special discount. Now through 9 a.m. PT on Nov. 28, save 30 percent each on Mega Man, Mega Man 2, Mega Man 3, and Mega Man 4 on Wii U and Nintendo 3DS. Be sure to visit the Nintendo eShop each Thursday to see what’s on sale next. Take a look at the full list here.

A classic 2-player scrolling beat ‘em up is back on Virtual Console! People are going missing in Bayside City and the rumours say some people conducting a shady human cloning experiment are responsible. For Rick (a.k.a. Hack) and Doug (a.k.a. Slash) this situation has become personal. Especially after three friends from their martial arts gym get abducted. The duo set off to the enemy’s secret Air Fortress to sort this out. These guys know all the moves, from martial arts to pro wrestling throws – and they don’t hesitate to use ’em. They’re not afraid of using knives, bats and other things they find to get the job done. And if that wasn’t enough, when they get hurt they get Angry – and you really don’t want to mess with them then. They ignore damage and hit even harder than usual! They’re ready for the action – the question is…are you?

Two worlds collide in an all-new adventure set in the world of Super NES™ classic The Legend of Zelda: A Link to the Past. In this newly spun tale, Link™ transforms into a living painting to cross into a dark, parallel dimension mirroring Hyrule. Conquer the puzzles, traps, and hidden rooms of deadly dungeons to save both worlds from certain doom! Brought to life in 3D, this beloved, top-down world is the perfect backdrop for a sweeping new tale. Dungeons sink deep below the screen as Link and his attacks pop out, highlighting the nonstop action. The pace is faster than ever, especially since you can swap items on the Nintendo 3DS touch screen. Shoot an arrow, toss a boomerang, bomb a wall, then merge into a painting to slide between two worlds – all in a matter of seconds. With gameplay, visuals, and controls this smooth and consistent, no Zelda adventure has ever been so action-packed.

Face off against friends and family in the all-new, ultimate Mario Party – a portable minigame extravaganza that’s bursting with gameplay possibilities. If you’ve never played a Mario Party game before, you’re in for a treat. There’s always something new to see on the Party Islands. In this ultimate showdown you can take on the road, blaze through the 7 new game boards, some of which take just minutes to play. Wrangle goombas and blast out of cannons as you tilt, tap, and draw through new minigames harnessing the unique functionality of Nintendo 3DS. Compete in new multiplayer modes including mind bending puzzles, minigame challenges, or enter a whole new reality with AR Card play for up to 4 players*. Whether in single or multiplayer, this is a portable party that never ends.

A Trip of a Lifetime to Santa’s Workshop at the North Pole Christmas Wonderland 3 is crammed full of fabulous HOG scenes, lots of truly superb puzzles for players of all ages and Santa’s Interactive Advent Calendar. In this sensational Christmas game, the Kids win the trip of a Lifetime and ride the Wonderland Express to the North Pole. They visit Santa’s Workshop, meet his Elves and Rudolph. They ride a Skidoo to Town and see the Princess’s Ice Palace, the Church and a Christmas Market. Suddenly it’s Christmas Eve. The Kids fly on Santa’s Sleigh, land on their friend’s house before getting home. But there is a BIG… BIG… SURPRISE waiting!

100 absolutely huge levels; 3 modes: Timed, Relaxed, Match 3 Maniac When Luna returns to Nevernear, she finds her homeland in ruins. The once-glorious kingdom has been razed to the ground by an evil power. Plunge headlong with Luna into a fantastic Match 3 adventure packed with magic, fantasy… and the insidious Evil. Exploit the power of the five Mages and conquer darkness in 100 huge Match 3 levels. Rebuild Nevernear’s castles and create mysterious gardens to keep Evil at bay. Let yourself be swept away into Luna’s wonderful world – and the fantastic story of Nevernear.

Ohno Odyssey is a physics-based, action-puzzle game that challenges players to guide the Ohno aliens through 35 gravity-defying stages as they roll on rails, jump and smash through obstacles, and zoom their way to the escape pod for safety. The Ohnos, a group of aliens whose malfunctioning mothership has caused them to crash-land on Earth, are strewn about the planet; they need to be located and rescued before they are discovered. The path to the escape pod is filled with obstacles that each player must circumvent using the tools provided in each thrilling level. The Ohnos can be shot out of cannons, dipped in oil, and even set on fire to break through barriers – all in order to safely guide them back to the mothership.

Phoenix Wright makes his return in “Turnabout Reclaimed,” a new case for Phoenix Wright: Ace Attorney – Dual Destinies. In this case, the Ace Attorney himself heads to the Shipshape Aquarium to meet new client Sasha Buckler and the accused killer … whale. Phoenix Wright must fight for his own redemption on account of this being his very first case after reclaiming his attorney badge. Download “Turnabout Reclaimed,” a prequel to the cases of Dual Destines, today.

The savings continue! Starting today, select games featuring your favorite blue-helmeted hero Mega Man are available at a special discount. Now through 9 a.m. PT on Nov. 28, save 30 percent each on Mega Man, Mega Man 2, Mega Man 3, and Mega Man 4 on Wii U and Nintendo 3DS. Be sure to visit the Nintendo eShop each Thursday to see what’s on sale next. Take a look at the full list here.

After breaking into a paint store in New York City, the cops are now coming after you! Carrying leaky 10-gallon paint cans, drive over every mile of New York City highways before catching a boat to England. From there, you will go on a tour of the world, avoiding the police and leaking paint all over the place. Your only defense: picking up oil cans left on highways and throwing them at police cars. Send the police for a spin, and knock them off the road as you make your getaway.

Hands On! Tangrams is a puzzle dissection game based on the 18th Century Chinese tile game. It allows gamers to manipulate geometric shapes to mimic real life objects, making you think outside the box! Tangrams puzzles claim to date back over 4000 years invented by a Chinese god named Tan and brought to Philadelphia, America in 1815 by Captain M Donaldson! It’s a total mind bending game for all the family. 10 themed levels; 100 pattern puzzles.