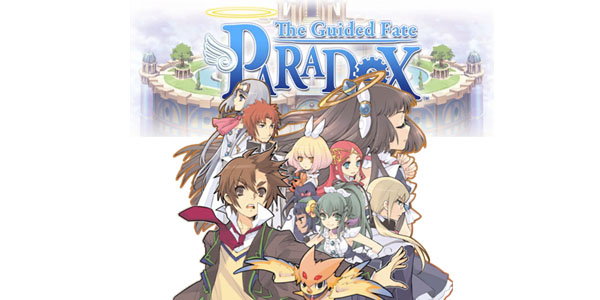 Taking a look at Celestia as the main focus instead of the Netherworld makes The Guided Fate Paradox a fresh and interesting title by the development team behind Disgaea. Much like the games setting, the system involved is unique as well. Technically you can think of this as angels and demons being trained differently, though you’re really training a new “god” in Guided Fate.

Basically it seems like Celestia is looking for a new “god” to take over, and unlucky teenager Renya Kagurazaka has won a magical lottery that has chosen him as the new candidate to become “god” of Celestia, or at least your section of it. With the assistance of a new angel recruit being his guide, Renya learns how to use the Fate Revolution Circuit to answer prayers. 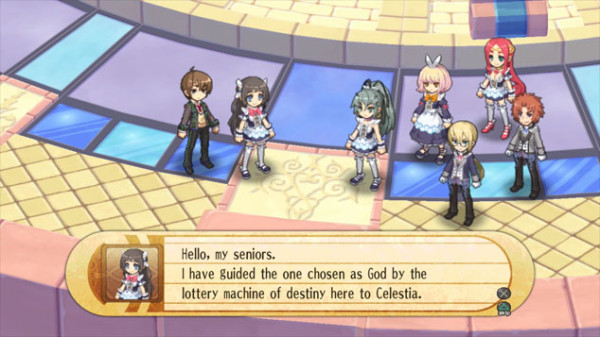 Things aren’t that simple though. There is a cast of angel maids of butlers that look after your area of Celestia at the Fate Revolution Circuit that seem quite questionable. Some aren’t impressed with the lotteries decision to make you their new “god” and there’s the threat of being “consumed” by something if Renya abandons his duties.

So Renya goes with his helper angel Lilliel Saotome into the Fate Revolution Circuit Machine in order to do your usual leveling up and dungeon delving. It’s vastly different than Disgaea however since this time around the game focuses on a rogue-like approach to the RPG elements. What that means is you’re still on a grid of sorts, but instead of a tactical approach it’s more leaning towards an action game in that when you move, the enemies also get one move as well. 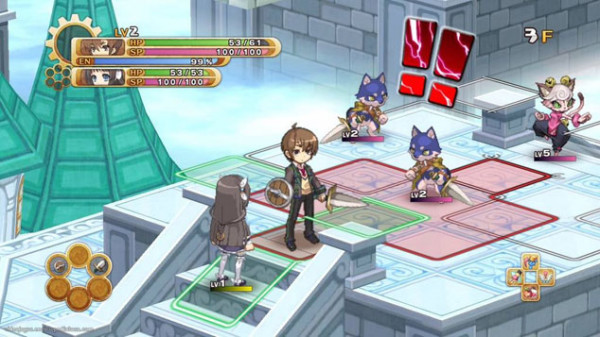 The games dungeons are split into one small section at a time, but delve down many floors per chapter. I think it’s about ten floors early on and that is split with an intermission that allows you to return to Celestia to do your shopping and such. Equipment is handled somewhat differently too in that you gain points towards items when you take out an enemy with them or such, and those points build until your item reaches “burst” mode. What this means is you can take it to your local Celestia blacksmith and get the items level upgraded for a fee. This resets the items points and raises how many you need to burst it again.

Leveling is quite different too, in that you’ll gain levels, but those go into a pool at the end of each dungeon run to add to your total levels back in Celestia. You also get stat boosts from bursted item upgrading to plug into what is called the Divinigram, which is a grid system like Final Fantasy XII‘s leveling concept. You lay out stat boost tiles and relics that give you various bonuses and abilities. So as you can see it is quite different than Disgaea. That and you’re focused on Renya. 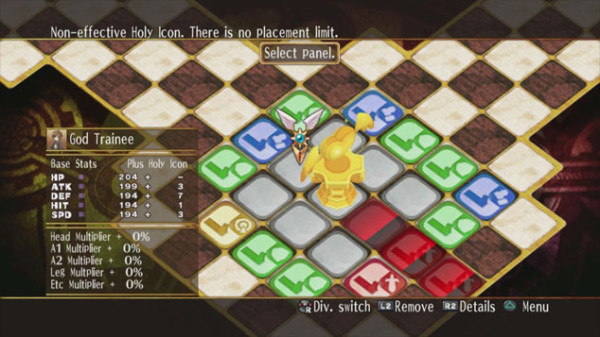 Combat allows you to still use special moves much like Disgaea. They are tied to your weapons and gear. So what you’re wearing/wielding allows you to choose what ability to use. Unlike the control setup of Disgaea, you’ll be using

The biggest thing that makes The Guided Fate Paradox feel fresh is that monsters are not reused sprites from previous games. As far as I can tell, many of the creatures are original creations for Guided Fate. Unfortunately you won’t be adding them to your party like in Disgaea, but you’ll still be taking them on in droves. There are even a few back in Celestia that are friendly and have halos to show that they fit in with your maid and butler angels. 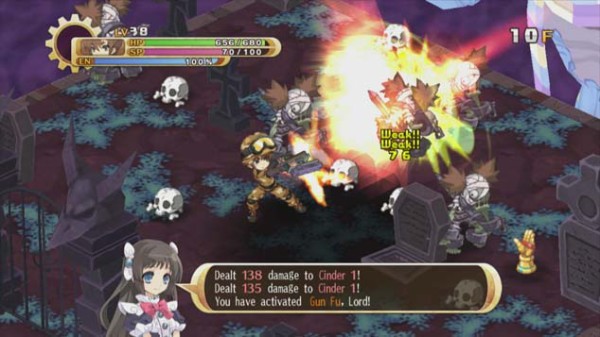 Unsurprisingly, it seems that Guided Fate is yet again another rendition of the world of Disgaea. So even though the place names are familiar, unless it’s a different time period or such, that’s where the similarities end. I always found it a bit difficult to keep track of everything since it seemed most of the Disgaea games featured a new overlord each time, however sometimes featured cameos of previous characters. I’m unsure if Guided Fate has any returning cast yet, but otherwise it seems to be it’s own universe. This isn’t a problem mind you, it’s just something you may have wondered.

It is important to think of this game as parody of course. Oddly since it focuses on Celestia the characters may make more sensitive gamers uncomfortable otherwise. However this is NIS’ own world and I’m sure isn’t meant to be taken seriously at all as some sort of commentary. Instead it’s giving gamers a chance to play the other side of the NIS’ universes spiritual world which has been the occasionally questionable and controversial Celestia. Sure you’re playing as “god” but it becomes apparent soon that there is a lot more to be learned about how Celestia works and what Renya’s new title really means. 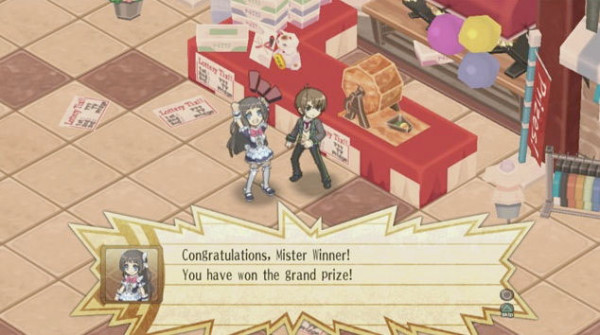 I’ve never played Zettai Hero Project unfortunately, but many gamers liken this title to that PSP game. Just from looking it up online it does seem quite similar in gameplay, including even adding modifications to your hero via a grid system. So if you have played Z.H.P. before then you’re bound to find some familiar ground here.

Back to the story here, you’ll be answering prayers in the dungeon system. How does that work? Well the person who prayed has demons holding them back from getting what they’re wishing for. So by destroying monsters in the Guided Revolution Circuit Machine you’re helping that persons prayers come true. The game doesn’t use this concept to really push along gameplay, more so it’s just the concept of why you’re in said giant prayer answering machine to begin with. Each chapter, or training exercise it seems the game calls them, encourages you to solve one prayer. So skip to the next paragraph to avoid early on spoilers now. You’ll be answering prayers such as one focused on Cinderella to start with, and following that up with helping a weak zombie who gets bullied a lot. 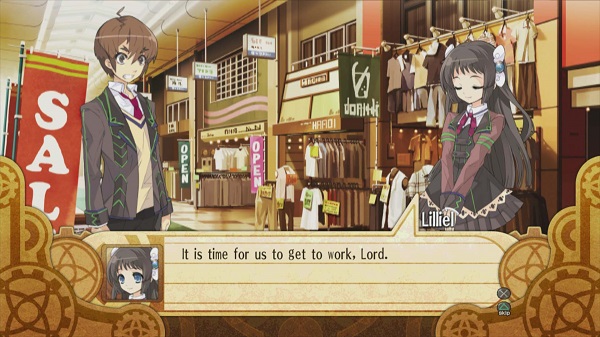 Like Disgaea, there are side dungeons you can go through and lots of content along the way to enjoy, so there is tons here to keep you busy. No item worlds, but there are dungeons you can still go dozens of floors down into. That and the dungeons themselves are all randomly generated in true rogue-like fashion. 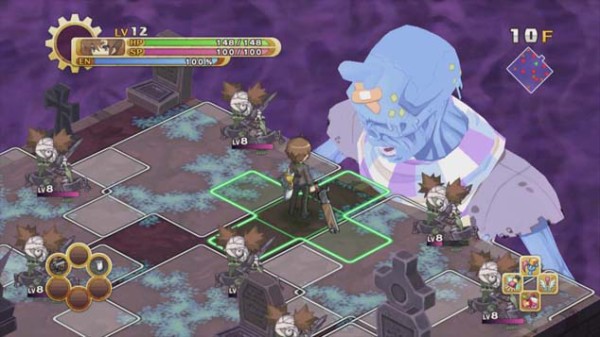 So what did I think? I like it! More story set in a universe similar to Disgaea, lots of fun and original gameplay which was completely new to me having never played Zettai Hero Project before, and of course the typical humour you’re used to from our friends at NIS and NIS America. Between this and Disgaea D2, there is a LOT of content out there right now to keep you busy with NIS RPGs. If you could only choose one, I’d say give The Guided Fate Paradox a try for now. If you absolutely love Laharl, Etna, Flonne and Disgaea‘s tactical gameplay, pick up D2. However Guided Fate does do a lot of new things and to non-PSP gamers, it’s a huge fresh title that has a lot in store. I admit, I’ve spent much more time in Disgaea D2, however I attribute that to my free time. I’m sure I’ll get back to both because each has it’s own unique and interesting story. But I am looking forward to seeing where The Guided Fate Paradox tale goes.