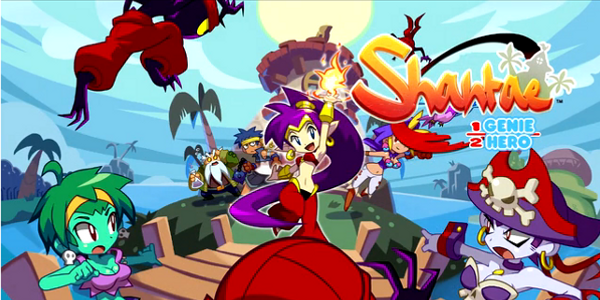 WayForward is the latest game developer to turn to Kickstarter looking to crowd fund their latest project. The game will be a new and original game in the Shantae series and will be in HD for home consoles.

WayForward has developed more than 200 licensed titles over the last 23 years, the most recent being Ducktales: Remastered. The company has also made a handful of games for Nintendo platforms, including the two previous Shantae games.

“Shantae is a a Half-Genie who hair-whips monsters with her ponytail, and belly dances to transform into magical creatures. She explores Sequin Land, solves labyrinths, trashes epic bosses, and foils the busty buccaneer Risky Boots, always managing to save the day!”

The first Shantae game was released for the Game Boy Color way back in 2002 and published by Capcom. The game quickly became a collector’s item and spawned a DSiWare sequel a few years ago. The original game was also recently released on the 3DS Virtual Console.

WayForward also has a new 3DS eShop title also in the works at the moment called Shantae and the Pirate’s Curse. When a curse falls upon Sequin Land, Risky Boots and Shantae must join forces to battle unimaginable evil. The third game in the ‘pixel’s series will be available for download this Winter.

So what’s the scoop with the new HD game? Shatae: Half-Genie Hero will be developed and released for Wii U, PS3, PS4, Xbox 360, Xbox One and Steam (Windows PC). Here is the plot of what will be the fourth Shantae adventure.

“Shantae is roused from a deep sleep, suddenly alert. She plunges into the moonlit forest in search of answers. In nearby Scuttle Town she discovers a mysterious trapdoor, and beyond that, a luminous subterranean cavern. A familiar voice calls out, drawing Shantae to a beautiful fountain. Touching its waters she is immediately spirited away to the fabled Genie Realm. At her feet a magical seal swells as some powerful evil seeks escape. The chamber trembles with a deep, bellowing roar and everything goes white. Shantae sits upright, back in her bed. Was it just a dream? Or a vision of things to come?”

What do you think? Have you played any of the Shantae games? Will you be contributing to help this game become reality? The developers have already reached $200,000 of their $400,000 goal with 25 days still to go. There are also stretch goals with additional content they will develop for the game for every $100,000 beyond their target.

If you’ve played any of the games in the Shantae series, and if you haven’t I recommend that you do, this should really peak your interst.

Take a look at the promo video for the game below.