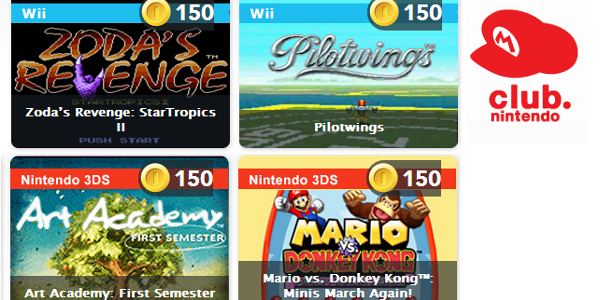 Also a rather unusual game has popped up which just costs 80 coins and is only available from Club Nintendo. That game is a WiiWare title called Grill-Off with Ultra Hand!.

Here are the details about the featured September Club Nintendo games:

DSiWare – 800 Points / $7.99 / 150 Coins
Work your mental muscles with this brain-busting puzzle game starring Mario. This downloadable game for the Nintendo 3DS system is one of the highest rated by Club Nintendo members—highly recommended for players who are fans of puzzles/brain teasers, platformers, and Mario™ games of all kinds.

Mario vs. Donkey Kong: Minis March Again! is available to download from the Nintendo eShop on Nintendo 3DS for $7.99. For a limited time only until October 6th 2013, Club Nintendo members can get the download code for just 150 Coins.

DSiWare – 800 Points / $4.99 / 150 Coins
Learn to draw with this fun and intuitive art tutor. A variety of lessons improve techniques for beginners and advanced artists alike
Use paints and pencils to create stunning works of art with realistic touch controls; Access Free Paint mode to draw from images in your Nintendo 3DS photo library.

Wii Virtual Console – 800 Wii Points / 150 Coins
Earn your wings with this arcade-style flight simulation game. Race against the clock to complete challenges and get certified in eight different lessons; Features different airborne crafts and aerial challenges like: piloting and landing a plane, skydiving, parachuting, and more; Recommended for fans who like flight simulators and racing games

Pilotwings can be downloaded from the Virtual Console section of the Wii Shop Channel on the Wii console for 800 Wii Points. Pilotwings requires the Classic Controller (sold separately). For a limited time only until October 6 2013, Club Nintendo members can get a download ticket for just 150 Coins.

Wii Virtual Console – 500 Wii Points / 150 Coins
Adventure through history and all over the world to stop an alien invasion! Recover missing artifacts as you stay one step ahead of alien clones; Help Merlin, Sherlock Holmes, and Cleopatra in exchange for new powers and weapons; Fight mythological beasts, dinosaurs, and more as you cross time and space.

Zoda’s Revenge: StarTropics II can be downloaded from the Virtual Console section of the Wii Shop Channel on the Wii console for 500 Wii Points. For a limited time only until October 6, 2013, Club Nintendo members can get a download ticket for just 150 Coins.