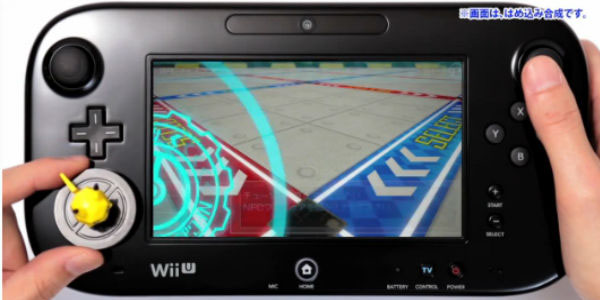 With the sad news that Pokémon Rumble U NFC figures aren’t coming to Canada it seems, I wanted to share my enthusiasm for more productions like this from Nintendo. For those who don’t know, these figures interact with your game by being placed on the Wii U Gamepad under the directional pad on that little rectangle icon.

Originally drawing comparisons to Skylanders, these figures seem to add to your game instead of being the main focus of it. Pokémon Rumble U does not require figures for gamers to enjoy it. We haven’t had any hands on yet, so we’re not positive of the exact nature. We only assume from what we’ve heard, the figures add unavailable Pokémon to your game.

Apparently there have been other developers who have considered using this technology on the Wii U Gamepad, but as far as we’re aware, this is the first implimentation of it. I’d personally love to see more of this. I don’t know if the Wii U Gamepad can save data to the figures like Skylanders does, but if it can a Nintendo based RPG in this style would be amazing. Or anything really with Nintendo’s list of licensed products based around it. We’ve all loved collecting figures in Smash Bros. before. Having that option it real life would probably be quite successful!

On the bright side, Pokémon Rumble U figures do seem to be at least the lowest cost option in the figure game market. At around $3.99 USD, it’s quite a good price. The down side is, they seem to be sold in sealed packages. While this does keep with the tradition of trading Pokémon at least, encouraging gamers to swap with their friends to get the whole collection, it is disappointing when you see how well Skylanders has done.

I’m not saying this isn’t a worthwhile title, I unfortunately don’t have any experience with it yet. But for now, Canadian gamers will have to wait for the figures, or import them. I only draw comparisons to Skylanders because of the obvious similarities and the fact that I’d love a Nintendo based game that followed a similar formula. I realize right now Nintendo is probably more focused on getting huge titles out like Wonderful 101 which does look awesome and makes good use of the Gamepad, but something that opens up the worlds we know and love to gamers in this sort of way may also be a huge boost to the system.

That and I’d really love a demo for Pokémon Rumble U. It looks like a great game, but I’d really like to be able to try it first. Even if it’s just one arena or what not. I may have missed the hype train on this one, but it just seems like there should have been more excitement put into this game. Maybe even a starter pack with a digital download code sold in stores.

Hopefully I’ll get to try the game out soon. I know a friend who has been enjoying it. I’m definitely excited to see how this title turned out!