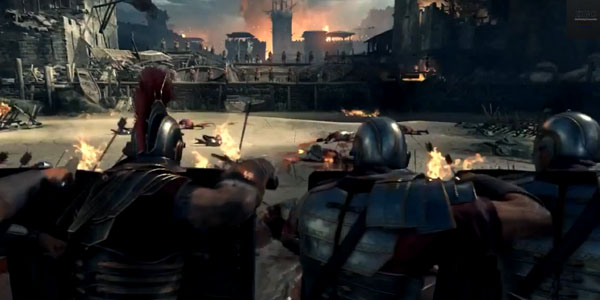 The main thing that stood out to me during the beautiful showing of Ryse was the control you have over your army. Seemingly by pressing LB you can give commands to them in combat to call in an archer strike or such during specific times.

However, one of the interesting moments focused on the players army advancing with them. As if you were controlling an entire line of troops. As they approached the castle they were attacking, a cry would go out warning of arrows. The player could then respond by making the troops hide behind a wall of shields as a full group defensive move. At least thats the way it felt. For a full look yourself, check out the gameplay video after the break.

Another element that stood out to me was the blood pools. They actually look like liquid in the gritty uneven ground of the battlefield. This caught my attention right away but unfortunately the camera was usually in too close to really show off if this was a dynamic effect or not. It looks really realistic! Either way, it definitely makes the game stand out visually.

The end of the trailer especially shows off some impressive might graphically with the number of soldiers and the location the camera pans around.