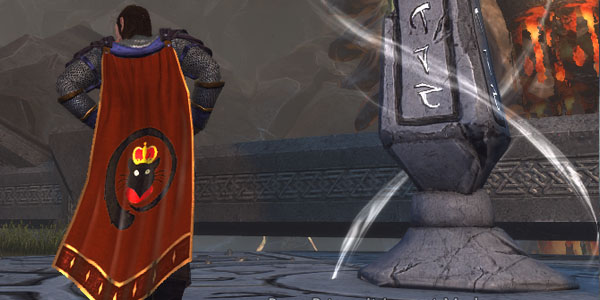 It was quite a wait over the weekend for gamers to get back to Cryptic’s Neverwinter MMO open beta, but players didn’t go home empty handed. All characters created before 6:00am Tuesday, May 21, 2013 recieved a “Caturday Survivor’s Pack” full of in game goodies via Neverwinter’s mail system.

On top of the list was the “Stone of Health” which includes a set of 50 charges to bring your character up to full health. The stone however is not useable for PVP. A “Cape of Catastrophe” (pictured in the article image above) which for early level players may be their first cape in the game. I’m not too far in yet, so I assume it’s an article of clothing you can gain later. Capes are included as neckwear. The “Dwarven Facemask” included is a casual piece of clothing for your off-duty gear. Also included was 5x Teleport Scrolls to Protector’s Enclave and 2x Adventurer’s XP Booster which gives 4,000 bonus XP earned at +25%.

All of this comes after a glitch was exploited over the weekend that seemingly compromised the games economy and brought about a seven hour roll back. The exploit effected the Astral Diamond exchange as well as the in game auction house.

Neverwinter is an exciting game and it’s great to see Cryptic taking this issue seriously. Not only are they looking into keeping the in game economy fair and honest, they are rewarding players for waiting out the down time with some really sweet rewards.