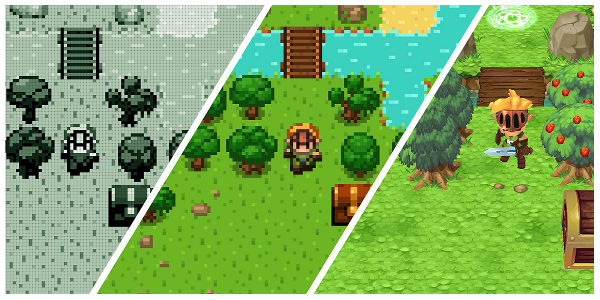 Evoland is the culmination of a labour of love, and is a combined turn-based/action RPG which spans the gaming generations from the 8-bit (NES) to the 64 bit (N64). Not only does the game evolve from the classic look of games to that of modern day games, but it does so in a clever way, which makes Evoland more than just a gimmick.

The game begins with the hero surrounded by trees and just a few treasure chests. At this point, Evoland looks like you’re playing it on a Game Boy. Large pixels of various shades of green make the Game Boy look unmistakable. The game mechanic that Shiro (the developers) implemented is that certain treasure chests in the game, when opened, expand the game. One early chest adds sound effects, while another introduces music. 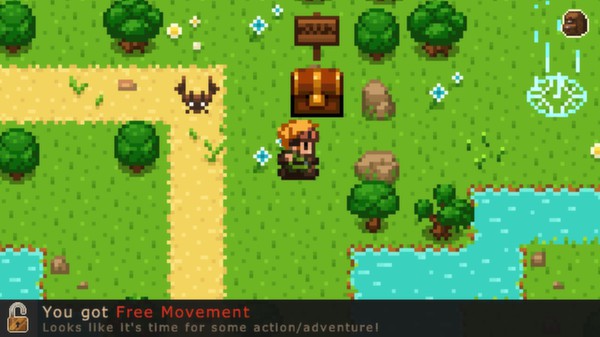 The lonely hero is joined by various monsters from another treasure chest, while enhanced “8-bit” graphics are the reward for yet another. Finding and opening the chests becomes a thrill, more so than finding new items or collectibles, though those are here as well.

Much of the beginning of the game is done with strictly action-RPG elements. Walk around a forest or dungeon with monsters all around you; avoid danger; and attack enemies with your sword, but be wary because just a single hit will kill you, and you’ll have to start from your last continue point–that is if you’ve found the treasure chest to unlock save points

The single-hit-and-you’re-dead state doesn’t last, because before not too long, you’ll also find a treasure chest to give you life hearts, such as the ones made famous in The Legend of Zelda. Bombs, a bow and arrows, and more are eventually added to your arsenal. The default name of the hero (which of course you can change) is even Clink. Sound familiar?

Once you get to the overworld map, Evoland introduces you to another game element in traditional turn-based RPG combat. Remember the battle system from Final Fantasy VII, with the charging bar that, once full, allows you to attack? That is how battle is done in the overworld. 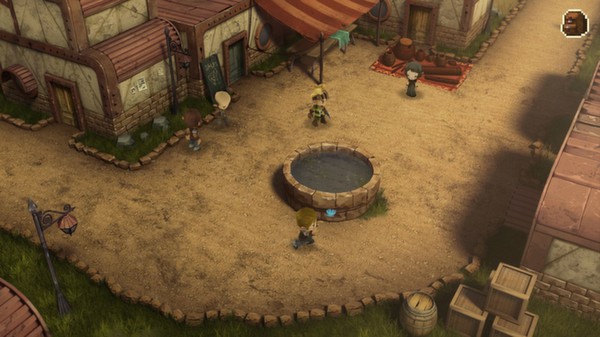 That’s not the only influence that Final Fantasy has on the game. During Evoland, you’ll encounter a girl who then joins your party, named Faeris (FF  VII’s Aeris?). Her home town Aogai is also the game’s introduction of “polygonal characters on pre-rendered backgrounds.” Evoland even goes so far as to put in mock loading screens (with an animated spinning disc) as you transition between areas of the town.

Plus there is a competitive card-based minigame in the town which uses collectible cards that can be found by exploring dungeons.

For a simple game, there are many layers to Evoland.

Some areas will have our hero travelling back and forth in time by tapping into the power of a mystical crystal. Depending on where in time you are, you will be able to travel the area differently and access different areas. Added to the mix, the past looks like you’re playing SNES, while the present (future) looks like N64. The puzzle elements of these areas is very well done. 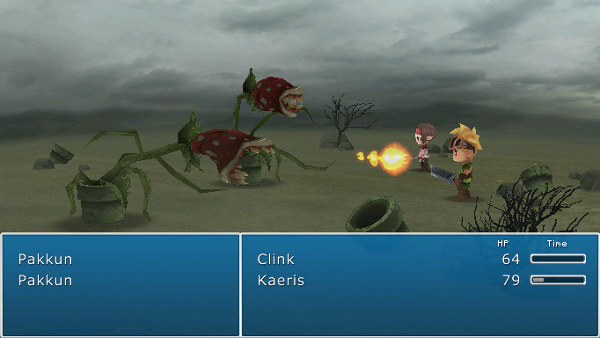 Even games that aren’t of the RPG genre are referenced in the game. There is one area of the overworld where the monsters are inspired by Super Mario Bros. Goombas, Koopa Troopers, and those fire-spitting piranha plants are fightable enemies. There’s even a nice little reference to Mr. Shigeru Miyamoto in one of the towns.

I did run into a bit of difficulty though.

During the action-RPG segments, it occasionally became frustrating trying to kill enemies. For the most part you can only attack in front of you, and some of the enemies are very random in their movements. The ability to swing the sword around and hit a range instead of directly in front would have been nice. Soldier enemies (sword-bearing skeletons, mages, etc.) are continually coming at the hero, and getting directly beside or above them to attack, while also avoiding their attacks, was very tricky and frustrating at times.

On top of that, while the monsters do occasionally drop hearts, I often lost more health than I gained trying to defeat those monsters to restore my life.

Another missing element I would have appreciated is a shield. The mages tend to appear and shoot a blast at you before they vanish. Being able to deflect those attacks from the front would have been very helpful, though likely lower the difficulty of the dungeons.

Later levels will swarm you with monsters, soldiers and mages (picture Diablo); attacking the swarms was very difficult while being bombarded by the mages who keep their distance.

Evoland looks and sounds great, and is a triumph for an indie game created by a start-up. Some areas, which are traversable in the 8-bit or 16-bit eras, can be also played in the 64-bit era. The designers did an outstanding job creating the environments for both eras.

The sound of the game is what really impressed me, especially in the areas where you time travel. The same music score plays in both eras, but in the past the soundtrack sounds like it’s from the 16-bit era while in the present sounds modern. 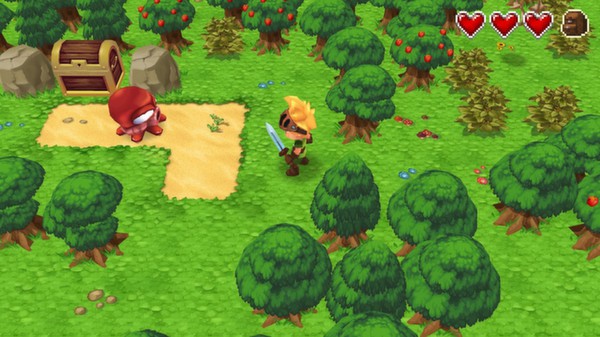 Evoland is a witty and fun game that plays homage to some of the more well-known conventions of the RPG and action-RPG genres. Taking a look at the genres as they exist today, and then seeing where the games came from is quite a novelty. This game isn’t a grand scale RPG with an amazing story and epic battles because it’s not supposed to be. This is a small scale role-playing game adventure that will make you laugh as you play. Definitely worth a look.

If this game has taught me one thing is that I am far better at turn-based RPGs than I am at action-RPGs. Also as someone who never plays PC games, it was a little tough to get started, and I hope that this game does make its way to the Nintendo 3DS’ eShop. This is a title that the Nintendo community would really enjoy.

Additional images can be found here.