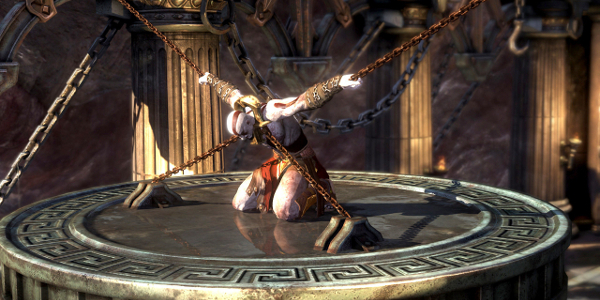 A brief prologue introduces the Primordials, beings who antecede both the Titans and Mount Olympus; they created the Earth by throwing down, Supreme Being style. The war amongst them also spawned the Furies, guardians who capture and torture those they deem guilty–a lot in life they seemingly much enjoy.

God of War: Ascension (hereafter Ascension) opens with Kratos, previously unconscious and currently in chains, being mocked by Megaera, one of the three Furies. Kratos appears confused, and Megaera questions him, asking if he’s having trouble remembering their time together. Well, yes, he is–I am, too. Ascension begins on an ambiguous note, and throughout not just the opening, but a majority of the single-player campaign, there is a question nagging while Kratos plods ahead: what exactly is he after, and why? I suppose that’s two questions.

The issue of Kratos’ motivations being unclear may have been remedied if Ascension was told in chronological order. As it stands, the narrative jumps between past and present, leading to encounters which lack the emotional heft a more traditional approach would have conjured. I suspect part of the reasoning to have Ascension unfurl as such was to have an opening segment that would rival God of War III’s, but let’s be serious, nothing short of knocking out Jesus was going to top that, and Ascension would have been better off starting slow and building to a burn.

Narrative missteps aside, the locales found in Ascension are fantastic. The Hecatonchires and The Harbor of Kirra may not be as well-known as Chronos or the Depths of Hades, but they’re crafted with utmost care and arguably the most visually stunning in the series. 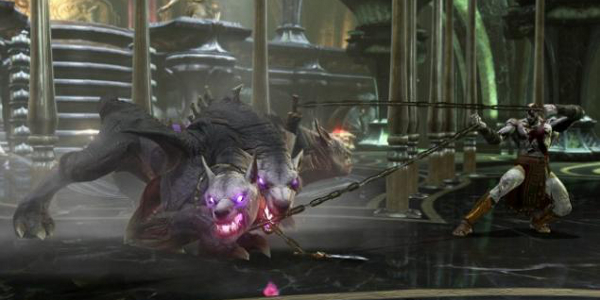 The scale of the environments certainly lends to Ascension’s visual panache, with Kratos riding monstrous snakes to the Temple of Delphi, a sequence that would no doubt satisfy Thulsa Doom; there is also the magnitude of the statue of Apollo, Archimedes’ masterwork, that makes the statue of Talos found in Jason in the Argonauts little more than a figurine in comparison. However, it’s the attention to detail that accentuates the graphical splendor, and makes Ascension one of the most gorgeous titles on the PlayStation 3.

Gold trim adorns immaculate emerald halls; snow-laden wind swirls atop painterly mountains; and waterfalls flank an extensive stairway found deep in the jungle. All of this is elevated by a surprising amount of subdued ambiance, as the sounds of rushing water and buzzing insects settle in after Kratos washes blood away with blood.

The creatures found previous God of War games resurface in Ascension, though their appearances have been altered to accommodate elemental changes, such as the wintry chimera, belching frost instead of fire; or the purple hued cerberi, infected with the souls of Hades.

Elephantaur juggernauts are new to the fray, and with them, a new gameplay mechanic. The quick-time events the series is known for are still present; however, certain enemies, such as the juggernauts, the new manticores, and the revamped gorgons, nix the timely button presses for something more engaging. Kratos still has to pummel the enemy until it reaches a weakened state for a brutal kill to be engaged, but instead of following on-screen button prompts, Kratos must hack and slash with reckless abandon, while monitoring the enemy for its attack cues, and dodge the upcoming assault with the right thumbstick. It adds a bit of tension to the execution, and the kills are still elaborate and satisfying.

Changes to the gameplay include a heavy reliance on the Blades of Chaos, a Rage meter, and world weapons. Tethering creatures and certain objects is now a possibility, allowing Kratos to hack at surrounding enemies with his free blade. World weapons, such as swords, clubs, and shields, can be found scattered about the stages or disarmed from enemies, and Kratos can incorporate these weapons and their moves into his Blades of Chaos combos relatively seamlessly. I found myself ignoring them for the most part, even though they can be powerful in situational combat. The reason is the Rage meter, which increases only when attacks connect from the Blades of Chaos. After the meter reaches 100 percent, Kratos has access to the most powerful moves in his arsenal. 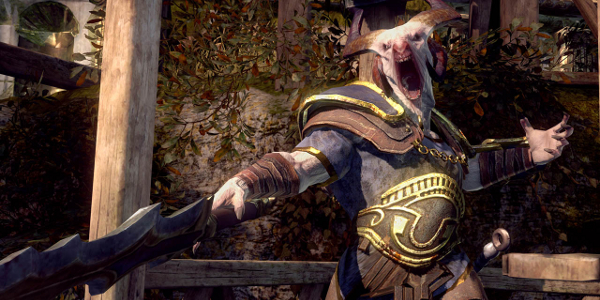 And what an arsenal he has in Ascension. The Blades of Chaos can be infused with the lightning of Zeus, the ice of Poseidon, the fire of Ares, and the souls of Hades. Each element can be upgraded to unlock special moves, magical attacks, and Rage attacks, and even better, Kratos can switch between elements mid-combo. The effects that accompany these skills are brilliant, and there is an urge to upgrade them to see what’s next. There is something galvanizing about hearing the souls of Hades scream as Kratos flails his blades into a crescendo of violence.

The elemental powers hinge almost entirely on the Rage meter, requiring it to be full for maximum damage to be unleashed. Kratos’ Rage requires perfect defense to maintain, since any damage taken will decrease the meter. You have to block, parry, and evade successfully to keep the Rage meter at 100 percent.

It’s easier said than done, because Ascension has no issues swarming Kratos with enemies. To compound matters, the most common enemy, satyrs, have hair similar in color to Kratos’ ash colored skin, making it harder than it should be to track Kratos. Enemy weapons will also glint white prior to an attack, which is also difficult to identify. And finally, Sony Santa Monica is obviously proud of the engine driving Ascension, and will pull the camera back to dizzying heights to exemplify their technical prowess; I am normally all for this, since it typically produces a lavish spectacle; I am, however, not all for this during combat, and more than once does Ascension have Kratos fighting multiple enemies while the camera is too far away from the action. It’s frustrating and unnecessary.

The combat may have moments of frustration, but the puzzles are markedly improved over God of War III. Early on in Ascension, they don’t deviate from your standard push this and pull that God of War puzzle, but eventually new aspects are introduced, such as a hallucinogenic mist which alters the terrain, and two items for Kratos to utilize: The Amulet of Uroborus and the Oath Stone of Orkos. The former has the power to warp time, healing or decaying objects; the latter allows Kratos to create a doppelganger, who can hold levers and cranks in place.

Both items can be used in combat, with the amulet providing the ability to slow enemies in time, and the stone to manifest the doppelganger for battle. Ascension has some of the more difficult enemy encounters in the God of War series, and judicious use of these items, which recharge after activating, is essential to completing the game.

Uroborus does bring an unintended consequence with its helpfulness, and that’s some game halting bugs. I’ve had the camera hang on objects after they’ve been decayed or restored, leaving Kratos alone to wander off-screen, requiring a checkpoint restart. Checkpoints are frequent, but that shouldn’t be an excuse for this not being patched.

And while we’re on the subject, Ascension also has some minor audio bugs, which do not cause checkpoint restarts, but are an annoyance, nonetheless. The expectation is set that when Kratos rips the head off a satyr, its panic stricken bleat should be audible, and when it isn’t, there is a detachment from your actions which takes you out of the game. Sony Santa Monica has acknowledged this bug, and a patch is eminent, but as of publication, the issue remains. 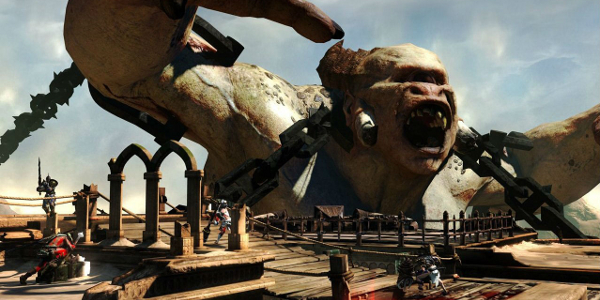 Ascension introduces online multiplayer to the series, and if it weren’t for some lousy matchmaking and a lack of host migration, the modes included–Team Favor of the Gods, Match of Champions, Trial of the Gods, and Capture the Flag–would be far more enjoyable to play. The main draw is Team Favor of the Gods; here, two teams of two to four players attempt to reach the target amount of “favor” to win the patch. Favor can be obtained by capturing points, smashing chests for orbs, or murdering your opponents. Stages will also have secondary objectives, like slaying the cyclops Polyphemus, to obtain bonus favor. Match of Champions is your deathmatch; Trial of the Gods can be played either solo or coop, and it’s a time trial against waves of increasingly hard creatures; and finally, there’s Capture the Flag, which is self-explanatory and doesn’t warrant a fancy name like the other modes.

You’ll swear allegiance to one of the four main deities found in Ascension–Zeus, Poseidon, Ares, or Hades–and in turn gain access to their respective powers. Level up, unlock new items, magic, weapons, armor, and so on, and customize your warrior–it’s typical, but atypical being in a God of War game. It may take a bit to get into the swing of things, and once you’re comfortable with the objectives and stage layouts, you’ll find some fun here. The matchmaking needs to be improved, and host migration definitely needs to be implemented, but this is good stuff for a first effort.

Ascension is a worthwhile entry in the series. The story it tells–Kratos attempting to break free from his oath to Ares–isn’t one I was asking for, and the disjointed narrative doesn’t help matters. There is, however, an excellent sense of gameplay pacing, as enemy encounters, terrain traversal, and puzzles never overstay their welcome. By the time Kratos reaches the Furies to bring them his unique brand of justice, you’re invested enough to see his actions through. Plus, the final sequence is the most visually arresting boss encounter I’ve experienced, and really needs to be seen. The multiplayer may not win any awards, but it doesn’t feel tacked on, and the gameplay found within it is a refreshing change of pace from the usual shoot your friends fare. God of War fans should definitely check out Ascension. If you’re interested in cleaving a gorgon’s face in two, it may also be up your alley.