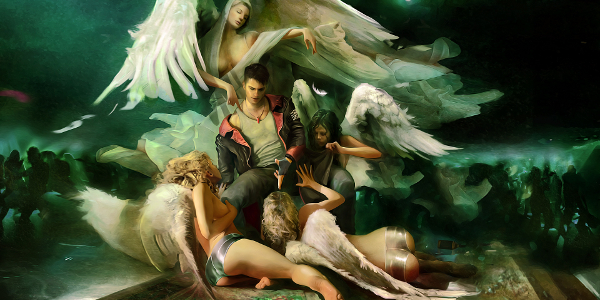 Devil May Cry returns as DmC, a new vision for the series by developer Ninja Theory, who are responsible for Heavenly Sword and Enslaved, two games that lean more on adventure than action. With that statement alone, Devil May Cry fans have expressed their displeasure, to put it mildly, with the shift in direction, and in some cases, have written the game off entirely. But, a new vision doesn’t necessarily translate as a wasted effort, and DmC is no slouch when it comes to delivering stylish action.

DmC begins with Dante waking up in his trailer, cat scratched and oversexed, to the drone of a pundit on Raptor News Network emanating from the television. Dante’s decadent existence gets interrupted by a young woman name Kat, a psychic that also dabbles in spellcasting, preferring a spray paint canister for her sigils. Warning him that his life is in danger, Dante is thereafter pulled into Limbo, a parallel plane of existence inhabited by demons, and they’re hell bent on eradicating the Son of Sparda. 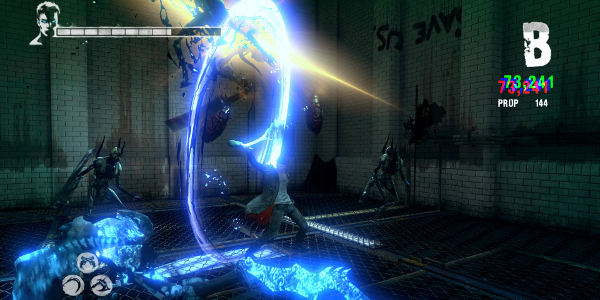 After dispatching the demons, Dante is filled in by Kat about The Order, an organization labeled as terrorists by Raptor News, that also happens to be led by Vergil, Dante’s twin brother. Vergil’s intent is to expose the demons, and destroy Mundus, the demon king; who is not only manipulating our reality through media brainwashing, but crippling our society with debt, all the while masquerading as a philanthropist. In addition, he sentenced Sparda to eternal suffering, and murdered Eva, Dante and Vergil’s mother, by ripping her heart out. I’m assuming he’s also an asshole.

Dante quickly signs up, and so starts the demon purging journey, as Dante is pulled in and out of Limbo, stylishly destroying a variety of visually interesting creatures. It’s in Limbo that DmC takes the genre to new heights, unabashedly using the medium to its potential, creating some of the most brilliant backdrops seen in the hack and slash genre. Reality is perverted here, and the world–perhaps sentient; perhaps controlled by Mundus; it’s unclear–contorts and expands to Dante’s presence. It’s not unlike the film Dark City, with the puppeteer in this case being unknown. It can be saturated in oranges, blues, and greens, and occasionally, literally flipped. In Limbo, Dante can also see reality for what it is: a dystopian, demonic nightmare, where its inhabitants are bombarded with messages to obey, consume, and drink Mountain Dew. 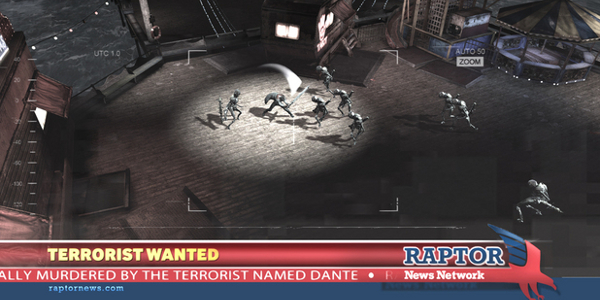 Dante is well equipped for Limbo, wielding Rebellion, a sword bestowed to him by his father, which is capable of shifting into weapons of both Heaven (a scythe and glaives) and Hell (an axe and gauntlets). There is an authentic sense of weight and motion with the various weapons, and the cinematic slowmo shot that accompanies a screen clearing kill is most satisfying.

Even better, Dante can cycle through his weapons in real-time, allowing complete access to his repertoire of moves without having to navigate through menus. It leads to highly amusing and elaborate enemy dispatching, as you switch from scythe, to axe, to sword to kill a lowly lesser demon.

Dante also has a whip of sorts, allowing him to lasso enemies towards him (Hell), or pull himself toward enemies (Heaven.) It also comes in handy to traverse the multilevel and multifaceted architecture found in Limbo. The option to quickly close the space between yourself and enemies makes for some exhilarating combat, and with the weapon switching being so fluid and accessible, it makes style easy, even for those with no sense of it. Add in Dante’s trusty pistols, and things are just s-s-sensational.

The new Heaven and Hell weapon dichotomy isn’t strictly for style points. Enemies are smartly introduced throughout the story that can only be damaged by Dante’s corresponding weapon, with blue enemies representing Heaven, and red enemies representing Hell. The new combat wrinkle may sour Devil May Cry purists, but for some, nothing but a direct sequel to Devil May Cry 4 would suffice, so I’m pleased to see Ninja Theory experiment with the gameplay. 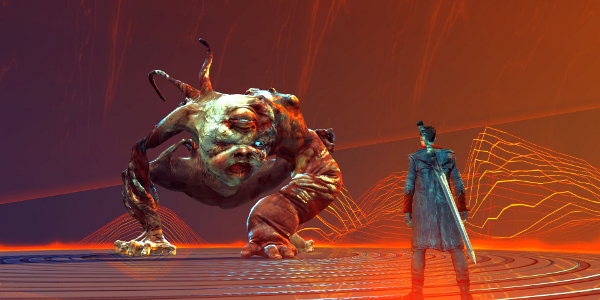 Ninja Theory has proven to be proficient at storytelling, with both Heavenly Sword and Enslaved being well told and well presented, featuring some of the best motion capture, cutscene direction, and acting in games. Surprisingly, DmC isn’t up to par with their previous efforts. The story, while straightforward in its presentation, doesn’t make much sense if you stop and think about it. The rules of Limbo play fast and loose, seemingly tailoring itself along the way to suit progression, and certain questions that may affect the narrative simply aren’t asked, moving things along uninterrupted to get to the next mission.

Dante does not have a satisfying character arc, since his demeanor is unclear prior to being introduced to The Order. In fact, all the players in DmC are introduced, and then developed through exposition. We know who they are; they play their roles; and they’re no surprises along the way. And it is unfortunate, because the world Ninja Theory has created, while derivative of other works (see, the aforementioned Dark City, and also the cult classic, They Live), is immensely fun to experience and explore.

The story may not rise above serviceable, but overall, the characters are well designed, and at least with our heroes, likeable. Dante is cocky without being arrogant; Vergil is calm and steadfast; and both are charismatic. Kat, especially, surprises with her earnestness. The demons are a vile lot, frequently expressing themselves as crudely as possible, with one in particular being spectacularly revolting, mashing the magnetism of Kuato from Total Recall with Capcom’s Fetus of God from Darkstalkers. It’s a shame that Mundus is so terribly boring.

DmC also gets a lot of the little things right, such as being able to try a new move prior to purchasing it with your hard earned ability points, and having a training mode available so you can practice your combos at your leisure. After completing the game, the unlocked difficulty settings offer a stiffer challenge by remixing the enemy layouts, while also making them more aggressive with expanded move sets. They’re also secret missions to unlock and complete, along with Bloody Palace, a mode with 101 levels of straight combat.

The sales for DmC haven’t met Capcom’s expectations, though perhaps those expectations were too lofty for what is essentially a reboot for the series. However, I found Ninja Theory’s take on Devil May Cry surprisingly fun to play, with the combat easily being the best they’ve delivered. Devil May Cry fans should definitely give it a fair shake.