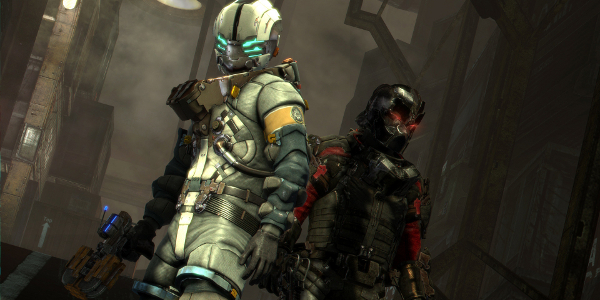 Dead Space is a great game series. Roaming the USG Ishimura in the first game, then exploring Titan Station in the sequel was an absolute survival horror treat. There is that magic about Dead Space, and it’s the kind of game you can play with your friends around as you wander the halls watching out for Necromorphs and items to pick up. However, many fans, including myself, were scared the most to see the bright snowy landscape of Dead Space 3. Thankfully, these fears were unfounded.

I’m playing Dead Space 3 in multiplayer, the mode that fans especially were afraid would ruin the horror element, and I have to admit, it’s just as wonderful! Enemies still come out of nowhere, you’re still unsure what to expect, and you still get in some adventure in space along the way. On top of all this it continues the story in a beautiful high-end movie style. It’s clear from the start, Dead Space 3 is a quality production through and through.

It should be noted I’ve yet to finish the campaign; however, the main joy is just wandering through each situation. Dead Space really is about the experience and not the wrap up. With this in mind, I felt comfortable writing this review now. I already feel I’ve gotten my moneys worth. 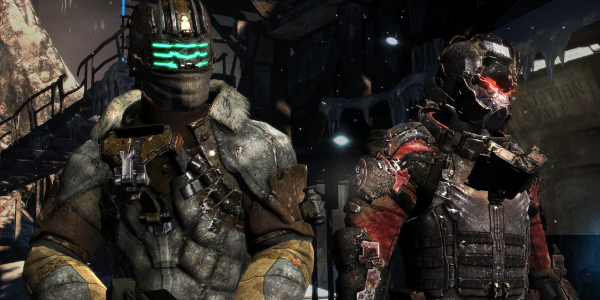 When we join Issac, he is living on Earth’s moon in a huge city. It doesn’t take long for things to turn horrible and you’re accompanied by John Carver, the second player character in this sequel. This works out great. The characters have their vocal interactions. Sometimes events happen for one character and not the other such as video messages that come to your RIG. It just feels right.

One of the biggest improvements in Dead Space 3 is that ammo just counts as generic ammo now. The pickups you get work on all weapons. This is handy for being able to use multiple weapons, which is something I didn’t do in the original two games. I was quite happy with my plasma cutter. You can have two weapons on you at one time. Being able to switch to the assault rifle for regular human foes seems to be better than just trying to go through with the plasma cutter alone. Aiming and cover in gun battles feels very natural to the series.

Weapons are also upgradeable now through chips you collect and can socket into your guns, as well as additional gear you can swap on your weapon to give it bonus abilities. This is handy since it lets you customize your weapons to your liking. Nodes are completely absent this time and instead you use these other options to upgrade. On the other hand, node doors are replaced by tungsten torque bar contraptions that allow you to open Dead Space 3’s equivalent. Which of course, tungsten is the rarer components you’ll be eager to find. 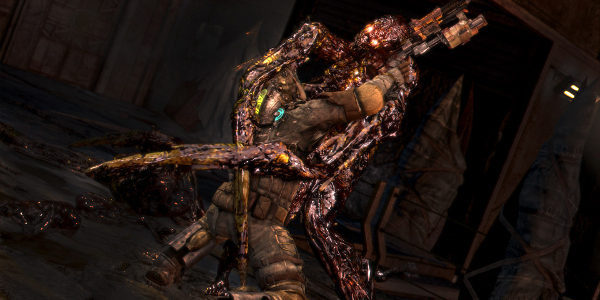 Components are non-inventory slot items you pick up that can be spent to make items instead of purchasing them. They also can be used too upgrade and add additions to your weapons. Even new weapons themselves can be crafted as you find their blueprints. All of this is from a relatively small set of component items that work as your currency in Dead Space 3.

As always, you have a RIG. This is basically the games HUD, which consists of a life bar up your spine, as well as a few other things such as your stasis recharge dial which shows how many more blasts of time-slowing power you have left. This can be upgraded at suit kiosk stations throughout the game, and they’re also other wearable suits which can offer various bonuses.

Another concern fans had was the addition of microtransactions to Dead Space 3. So far I have not needed anything additional in my game. Ammo has been plentiful, I have lots of health packs, and components have been distributed fairly. Actually, even though I am playing through casual right now just to enjoy the story, I feel like my RIG upgrades came much quicker in DS3.

Much of the first half of the game still takes place in space, then you finally get down to the snowy planet you’ve seen in previews. This is your usual Dead Space experience featuring action, new puzzles, and of course Issac fixing whatever is broken to proceed. At times you can feel frustrated by missions that ask you to go fix something, but after you get into the mission it’s usually a worthwhile, fun experience. There are even side missions you can opt to take such as exploring another ship in orbit. These are usually good for extra story and additional gear.

Puzzles have the addition of occasionally being co-op events now. They are relatively basic but feel like a fun diversion that encourages teamwork to complete. Working together does feel enjoyable and rewarding. Yelling over voice chat that your buddy has a Necromorph about to pounce on his back makes for some dramatic moments.

Once you get to the planet, there’s even a section where instead of air, you’re worried about running your body temperature down before reaching your next heat source. It’s a nice way to change things up with a heat readout on the back of your RIG. 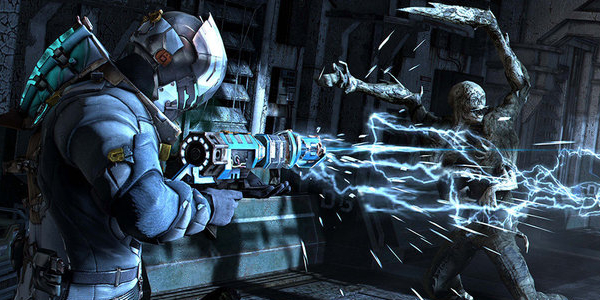 I’m really having a great time in Dead Space 3. It feels like an addition to the series, not like something the creators have to apologize for because it’s only following the story’s direction. This is still the series you’ve enjoyed. Even if you have a friend along with you, it still has its shock moments. Sharing it with someone, if anything, has just made the game even more enjoyable.

I don’t want to spoil anything, so I’ll just say I highly recommend this title. Sure it feels like familiar ground if you’ve played the first two games, but it is a solid continuation to the story. I’m not sure how it will end, but I’m enjoying the trip along the way and I’m about a good twelve hours into the game. No matter how it ends, I’ve enjoyed approximately thirty two hours of the series overall, from the first game to here. Visceral Games has developed a fantastic production and it isn’t a series you should pass up. Space adventure fans especially will find a lot to love in the series overall.