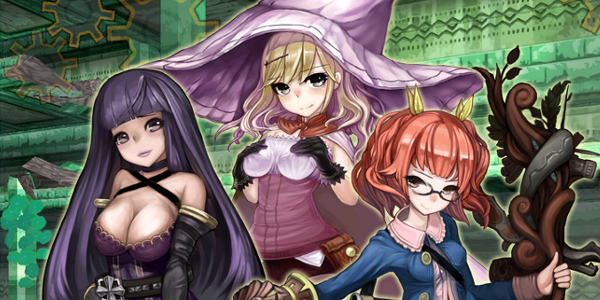 Quite a few demos released today with the Monster Hunter 3 Ultimate demos for Wii U AND 3DS, as well as Trine 2. Plus F-Zero and Yoshi are released on the virtual console and a handful of original 3DS eShop titles. Check them all out below.

Discover the world of Monster Hunter Battle larger-than-life monsters Create tons of weapons and armor Discover the epic world of Monster Hunter as you journey through more than 200 exhilarating quests, battle larger-than-life monsters, and create hundreds of weapons and armor. Hunt with your two AI companions in single player quests or connect the Wii U system with up to three friends in four player online battles. Visually stunning 1080p HD graphics and online voice chat make this the best Monster Hunter experience to date.

Fantasy Action Platforming with Physics-Based Puzzles and Fairy-Tale Adventures Trine 2: Director’s Cut takes you on an adventure through magical lands in this sidescrolling game of platforming, action and puzzles. The game features physics-based puzzles using fire, water, gravity and magic; wicked goblins to fight against; and wondrous fairy-tale lands as backdrop to the adventure. Take on the role of one of the Three Heroes – the Wizard, the Thief and the Knight – who all have their own personalities and skills. Play on your own or transfer the experience to multiplayer – up to three players can embark on a co-operative multiplayer journey in online or local ”couch” mode. Trine 2: Director’s Cut – exclusively for Wii U – features new enhancements and gameplay polish, along with the Goblin Menace add-on campaign and a brand new Wii U exclusive level, the “Dwarven Caverns”, in one big package, totaling in 20 levels full of fun and exciting gameplay.

In this futuristic racer, the key to winning is speed! Speed into the future with the first installment to the F-Zero™ series. Operated by their own designated racer, including the celebrated Captain Falcon, pick one of four proton-powered hover cars—each with its own acceleration curve and design modifications. Strategy will play a big part in this speed fest as you race across 15 courses filled with challenges and pitfalls. Find shortcuts, elude hazards, and snag power-ups if you want to beat the competition. Keep an eye out for sand, land mines, magnets, and other trouble spots, but always be ready for that boost from a speed or jump plate to get ahead. You’ll need split-second reflexes to control these speed machines of tomorrow, so get ready for an experience that’s out of this world!

Discover the world of Monster Hunter Battle larger-than-life monsters Create tons of weapons and armor Discover the epic world of Monster Hunter as you journey through more than 200 exhilarating quests, battle larger-than-life monsters and create hundreds of weapons and armor. Don’t hunt alone! Hunt with your two AI companions in single player quests or team up with up to 3 players via local connection. A fully customizable touch screen allows you to personalize your hunting experience and local Nintendo 3DS search feature allows you to find other hunters near you location. Nintendo StreetPass™ functionality gives you the ability to share you guild card with fellow hunters.

Sonic and the All-Stars cast line up on the starting grid once again to battle for supremacy in the ultimate race. Compete across land, water and air in incredible transforming vehicles that change from cars to boats to planes mid-race. Master your driving skills as you drift, barrel roll and boost to overtake your rivals, or use your weapons tactically and unleash your All-Star move to gain the winning advantage.

A quick-shuffle action puzzle game starring Yoshi! Original Release Date: June 1992. Yoshi™ is an action/puzzle game starring Mario’s dinosaur buddy Yoshi who has been imprisoned in an egg. Now it’s raining Goombas, Bloopers, and Boo Buddies, and you have to help Mario™ stop the airborne invasion. As the critters fall, catch them on trays. Stack two of a kind and they both disappear, or capture the whole bunch in between eggshells. When the eggshells match, out hatches Yoshi and up goes your score! The action heats up as the characters fall faster and faster. To save the day, switch and shuffle, and don’t let your piles get too high!

For centuries, the tree Yggdrasil has been a constant presence in the lives of the people of Tharsis. It looms on the horizon, visible from everywhere in the city But its roots are in a far-off land where no one has ventured until the Outland Count of Tharsis sponsors an Explorers Guild to reach Yggdrasil and discover its secrets. You are the latest explorer arriving in Tharsis to seek your fame and fortune. Board your skyship and set out into the clouds in search of treasure, glory, and the answer to Tharsis’ oldest mystery. You are only as good as your map and your heroes. Celebrate the tradition of classic pen and paper roleplaying games by using the bottom touch screen to chart out your path and the dangers you have encountered. A good map might save your life. A deep character creation and party customization system encourages experimentation and rewards creativity and imagination. Every choice matters. All-new casual play option allows beginners and newcomers to more easily learn the ropes without fear of setback or death with this new, less daunting mode. Gaming’s best tribute to retro RPGs enters a new dimension packed with improvements and content: an enhanced graphics engine boasting polygonal enemies and new 3D special effects; upgradable, customizable skyships that let players travel and battle amid the clouds. Take advantage of the new StreetPass feature to trade guild cards and characters. An exceedingly atmospheric and fully orchestrated musical score from Yuzo Koshiro, in addition to expanded, more immersive 3D dungeons with analog camera control rounds up the features of the newest addition to the Etrian Odyssey franchise.

Embark on an adventure through the depths of the dungeon as a couple in Picdun 2: Witch’s Curse, the 3D dungeon RPG. Picdun is back, now better than ever! And this time, you can explore as a couple! Picdun 2: Witch’s Curse is a 3D dungeon RPG set in the mysterious dungeon called “Picdun.” Choose your partner from three female adventurers–the Archer, the Whipper and the Spellcaster–and venture into the depths of the dungeon together. Sixty stages await you, filled with a wide variety of puzzles ranging from easy to mind-bendingly difficult! Places you go are mapped automatically, and once you cover all the tiles on a floor you will complete the picture hidden underneath. As in the previous game, battles feature a large number of dynamic and powerful enemies. The hero is unable to attack due to the Witch’s Curse, so he must protect his partner with a shield and guide her to attack by chopping down or slashing sideways. Also, you can trigger a power move by raising the shield at the same time as an enemy attack. Explore the depths of the dungeon to uncover the mystery of the Witch’s Curse!

The sequel to the critically acclaimed Viking Invasion! After the success of the first game, follow the whacky new adventures of Olaf the Viking and his group in this cartoon-style fantasy Tower Defense. During their journey, these terrible bearded warriors with a debatable sense of humour will have to travel to places that are more offbeat than ever. Your mission: stop them from pillaging everything in their path! Build your towers at the most strategic locations to block the advance of the Viking units. To counter the drakkars, Valkyries and even the god Odin, unlock new buildings and upgrade your defences! Features: 12 maps featuring 30 different enemies; 8 types of towers with over 90 upgrades.