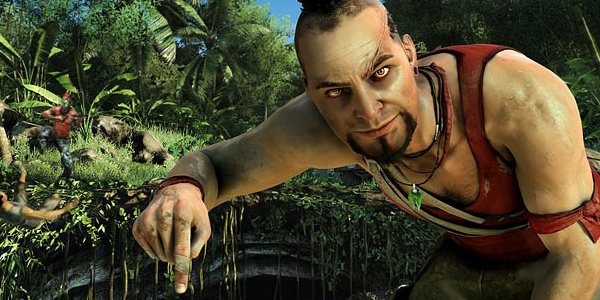 Now for a game that’s been called Skyrim with guns, what can I really say about Far Cry 3? How about this game is one of the best examples of character development in a game to date! Far Cry as a franchise has always been somewhat lacking, with great ideas and horrendous execution. Far Cry 3 clearly sought to change all of that. So follow me dear readers and embrace the path of the warrior.

If I had to describe the visuals in Far Cry 3 with one word, it would be breathtaking. Seriously, the huge sweeping vistas and the sheer scope of the jungle are truly amazing. The way foliage reacted to its many wildlife inhabitants is fantastic; I can’t stress just how much I felt like I was in a jungle. Combine that with some very impressive first person animations that really make you feel like you’re the main character experiencing everything that he is, and you’re in for one hell of a ride. Now of course that is the look of the game, but what really completes the experience is the sound design. 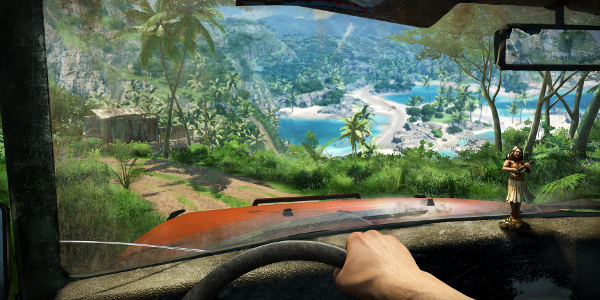 When you crouch in the tall grass, stalking your prey, you’ll hear the wind blow through the hills. The sounds made by every creature echo off the river flowing nearby. Sure, there can be a stale line of dialogue, but overall the performances are crisp and believable which really helps humanize some of the characters, or dehumanize them in other cases. Far Cry 3 truly is a gameplay experience.  You have to play it. No amount of trailers or demos can do it justice.

I feel that the team at Ubisoft really pushed themselves. They wanted this to be much more then just another shooter. Did they succeed? Hell Yes! One of Far Cry 3’s greatest accomplishments is its story, something I most definitely was not expecting.

When I first saw Far Cry 3 I thought okay, you’re a spoiled rich kid who is trying to save his douchebag rich friends; why is this appealing? Oh boy did I look at this game in all the wrong ways. Now the spoiled rich kid part is partly true, and it can feel taxing when interacting with these characters at times, but I feel this was actually intentional. You see, throughout the game there is this theme being pushed, and that’s the main character, Jason Brody, is evolving as a person. Jason fights simply to survive; he has to learn to kill or very likely be killed. More so he begins to … (Liquid Snake impression) enjoy all the killing! 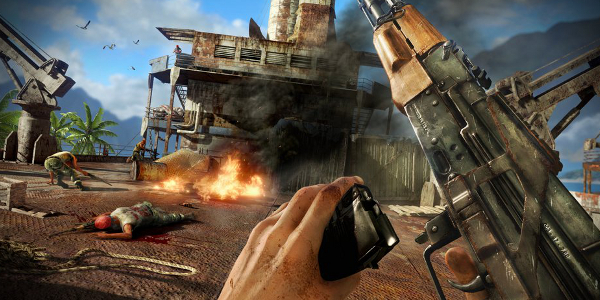 Far Cry 3 has the courage to ask a difficult question: How would such an experience–a true kill or be killed experience–affect a person and how would it change them? The story is not without its faults: The ending is a little disappointing; certain characters felt like they could have stuck around longer, and they could have been fleshed out a bit more (looking at you Vaas). All and all the question this game raises is far beyond something you would find in a typical shooter, which is very well what this game could have been. The evolution of Jason Brody was not just a narrative device; the team at Ubisoft managed to work this theme directly into the mechanics of the game.

Now we’re going to talk about the gameplay. See, Far Cry 3 could have been just another shooter with some tacked on RPG elements, which again was my original assumption–I’m so happy this game kept proving me wrong. Jason Brody is not some trained soldier who is used to combat or even has experience with weapons. You start this game with basically nothing. You are restricted to a single weapon through the game’s crafting system. Jason can craft additional holsters and ammo pouches to hold extra weapons and magazines. If you do not go hunting for the appropriate wildlife to make these upgrades it can make the game exceedingly difficult, but again I believe this was intentional. You are not a random super soldier. You’re some college aged kid who got kidnapped by pirates. You can barely handle a firearm; you keep the one spare clip you have in the pocket of your jeans. 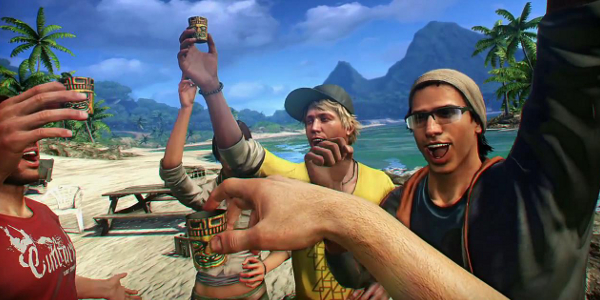 This is something that really felt refreshing, though at first I was annoyed by what seemed like arbitrary limitations that forced grinding, but through further play I began to appreciate the growth of Jason. He went from this scared kid, much like any of us would be in his situation, to a warrior capable of taking out pirate strongholds. It’s refreshing to see greatness from small beginnings. The game also features a wonderful upgrade system. Think MMO, with three different talent trees all leaning towards a particular play style, allowing further customization of Jason as a character. Now this system does have its drawbacks, because there is an abundance of activities to complete, in turn making it easy to rack up the experience and make yourself pretty godlike. Thankfully the game forces you through the story in order to make some of these powers available, preventing you from removing the challenge altogether.

There really is something for everyone in Far Cry 3. Do you love a good story with superb, believable voice acting and meaningful character development? This game has that. Do you like solid shooting mechanics? This game has that. Do you like exploration and side activities on the same level and scope of Skyrim? This game has that. This game will be appealing to RPG fans, shooter fans, even some stealth fans depending on how you level Jason Brody. If you’re like me and were skeptical of the praise heaped upon this game, then this review is for you. Buy it full price; play Far Cry 3. This game could have been just another shooter but Ubisoft took a risk and made it so much more. With risk comes reward, and this is the type of thinking that needs to be rewarded in the game industry. Congratulations Ubisoft, you’ve made a game that will go down as a classic. I’m sure of it.