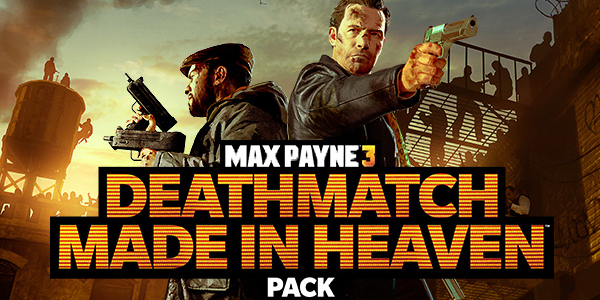 On January 22nd, Rockstar Games will be releasing the final Max Payne 3 DLC pack for all platforms. The company promises that the pack will be an action-packed pack which will contain new co-op and competitive modes, plus “other awesome treats” for Max Payne 3 Multiplayer.

Rockstar has revealed more of what is in the Deathmatch Made in Heaven Pack in greater detail today. The details are listed below. The official artwork for the pack in above.

In addition to Dead Men Walking, which puts you and a friend up against an endless onslaught of enemies, the pack will also feature the new Run & Stun mode, Marked Man which adds vendetta fueled multipliers to traditional Deathmatch and a new Time Attack mode which awards bonus points for successful kill streaks in a competitive free-for-all.

Rockstar also released a rundown of new weapons to be featured in the game, including some nasty pieces or armaments.

THE CATTLE PROD
Not just for herding livestock anymore. Use the Cattle Prod to get your enemies in line – perfect for running up on opponents in close quarters and freezing them with a high voltage shock before you finish them off with a devastating melee attack. Having a splash effect, this weapon has the ability to hit multiple targets that are bunched up close together in a defensive stance. A bunch of camping bastards waiting around the corner for you? Pop out – zap em – and then calmly unload while they’re frozen in shock.

THE NIGHT STICK
The Night Stick has been a reliable tool for civil law enforcement going back to Victorian times. In Max Payne 3 Multiplayer, you can equip it to not only issue a good old fashioned melee beatdown when in close combat – but also to give the unlucky player on the wrong end of the stick a spawn disadvantage – poor vision, low health and stamina. The Night Stick is particularly useful in team games, where a teammate can get an easy kill on a respawned player.

THE STUN GUN
The stun gun is an ideal weapon for incapacitating your enemy. By temporarily cutting off muscle movement, your adversary will be utterly helpless. Capable of making contact from a short to medium distance range, your target will drop to the floor instantly, giving you the ability to end them with ease. The stun gun is especially useful against players with above-average health, such as Takedown targets in Gang Wars or those using the Big Dog and Unstoppable Bursts.

PEPPER SPRAY
Pepper Spray can be a dastardly and beneficial tool. Equip it in one hand with a trusty firearm in the other, and spray it in enemies’ faces to temporarily blind them. Then bring the pain. The Pepper Spray has the same blinding effect as the strongest level of the Hangover burst.

THE BOUNCING BETTY
A brand new projectile, the Bouncing Betty is quite the versatile weapon. If you like to snipe, just tactically place a Betty where you think enemies will attempt to sneak attack you and they will be toast. Another helpful strategy is to place them in high traffic movement areas, such as doors and entrances, guaranteeing you some kills. This weapon is also great for Gang Wars during capturing and protecting rounds. The Betty might be smaller than a breadbox but it is capable of some very rewarding

The Deathmatch Made in Heaven Pack will be available in all territories on January 22nd for 800 Microsoft Points on Xbox LIVE and $9.99 on PC and PSN in North America. The pack will be released for PS3 players in Europe on January 30th. Rockstar Pass owners will receive this content at no additional charge.