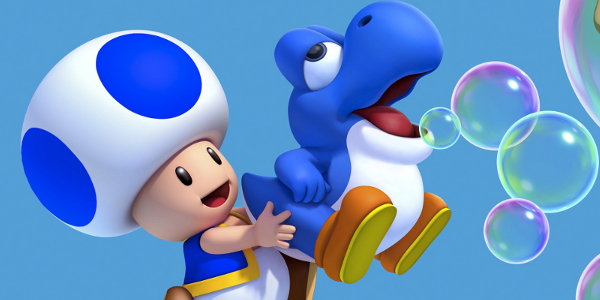 There’s something about New Super Mario Bros. U that feels like a step onto new ground. First off, the map screen is a welcome change featuring winding pathways similar to Super Mario World. I know it’s just a simple cosmetic change, but with such little story in the side-scrolling games compared to the likes of Super Mario Galaxy, the world map gives more of an adventuring feel. I realize this is an odd point to start with, but I’m a huge fan of this and it’s a feature I’ve missed. New Super Mario Bros. Wii did a good job bringing it back, and New Super Mario Bros. U (hereafter Mario U) feels solid with the expansive map returning to the series.

Interestingly too, along with the new flying squirrel suit, Mario U adds a new foe. In the intro, Mario, Luigi and the two other playable Toads are flung from Peaches’ castle by a mechanical arm addition to Bowser’s airship. They crash land into a huge tree, and you begin the game at the base. Upon crashing into it, the tree drops many acorns which give Mario the flying squirrel suit. Also, the enraged flying squirrels fight against you throughout the game with similar glide and wall grab abilities as the suit gives Mario. This is a fun twist since technically, unless they’re Koopa army soldiers we’ve never heard of, these squirrels are actually just angry at Mario by their own volition.

Aside from that, baby Yoshis allow for various new abilities, such as one who can inflate and help Mario float, to a glowing one that is useful in dark areas. The game in general feels familiar, but it’s all well designed and enjoyable. If you like Mario games, you’ll enjoy this one. 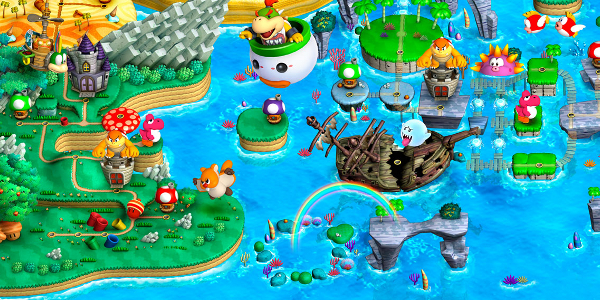 This being the first Mario game in HD is only the starting point of the additions to the series, however. Mario U‘s extras are what really make the game fun and worthwhile. I enjoyed the main game, but I think the challenges were even more exciting at times. Challenge mode has lots of different tasks to tackle that are easy to get caught up in replaying. From collecting as many 1ups by stomping enemies in a row, to dodging fireballs for a set amount of time, these are fun diversions outside of the main game. These sorts of additions were fun in Mario 64 for the DS with its mini games. I’d love to see a lot more of this included in the series.

In general, much of what has been established in the New Mario Bros. series returns here, but it’s definitely a fun adventure worth taking. Airship levels especially have a fun feel to them and add to the nostalgia for long-time fans. Boss battles are fun and usually have little quirks. They tend to be easy enough, but are still fun to play. Another interesting addition is leaving notes for other players upon various conditions when you beat a level. It’s like the Miiverse messaging system but built into the game, so you can warn other players of traps in a level they’re about to enter, or just say, “Whoo! Finally cleared this one!” Plus, you can draw as well using the Wii U GamePad to send a message instead. There’s lots here to keep you playing. 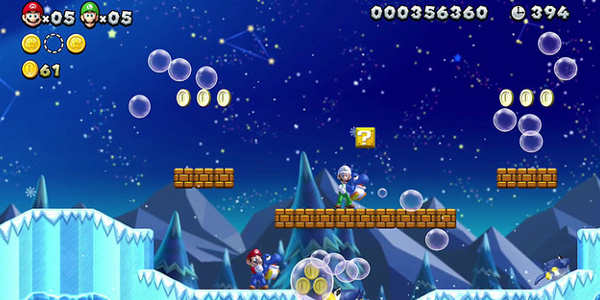 Aside from all this, it is worth noting the game does play on the Wii U GamePad. This is wonderful because it really does make all the difference if you’re living in a single TV house. Pick up the GamePad, turn it on, and go into the game. You don’t even need the TV to get right into playing with the GamePad, with no prior setup required. It’s pretty sweet being able to just grab the controller like it was a DS and get right into the game. The Wii U uses less power than the other game systems as well, so it’s pretty guilt free if your friend is gaming on another console. What I didn’t like about it is there doesn’t appear to be an option to turn off the GamePad screen and still keep playing. So when you’re gaming on the TV with the GamePad, the display still shows all the action. That’s got to be a decent drain on the battery that isn’t needed, though maybe I just haven’t found the option, but that’s a downer, since at least in single player, the GamePad screen isn’t needed.

All in all, I’m proud of Nintendo. It’s been over two decades since the release of the original Super Mario Bros. and we’re still getting side-scrolling action that we love. The series could have evolved into 3D 3rd person exploration and never looked back, but we still get these love letters from Nintendo and it’s great to be able to continue side-scrolling in the Mushroom Kingdom and beyond. I do wish the side-scrolling games would evolve more with the story, though. I know it wasn’t much but Super Mario Bros. 3 felt like it had more even just with the blurbs you got at each castle. That’s just nitpicking though. This is a worthwhile title that fans will probably want for their new Wii U systems.