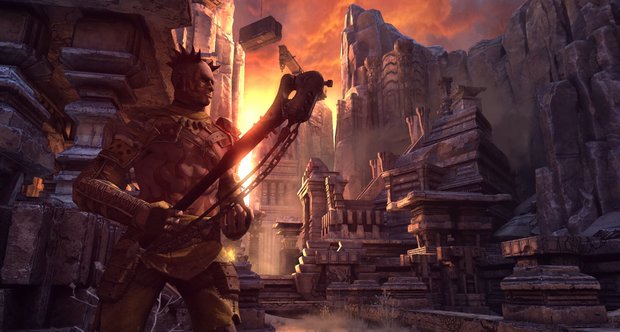 Rage released October 4th, 2011…and now, over a year later, id Software and Bethesda have announced that they will be releasing The Scorchers DLC next week for 400 MSP (or $5). The Scorchers was originally planned to be a part of the main game but was cut from the title before it released.

Here is the press release from Bethesda:

In this brand-new adventure spanning six all-new areas, you will fight alongside new allies to defend the Hager Settlment from a maniacal bandit clan known as The Scorchers. Along the way, you’ll participate in a new season of Mutant Bash TV, encounter new mini-games, and wield the overpowering and brutal Nailgun.<

In addition to the new content, this DLC includes ‘Ultra-Nightmare’, a new high difficulty mode, as well as an ‘Extended Play’ option that allows you to play past the original ending of the game – giving you the opportunity to finish collecting items and achievements.

So we get a new difficulty level, an extended play (which I need to wrap up some collectibles), and a whole new adventure. Heck yes! Next week is going to be awesome! Anyone still holding onto their Rage copy or will  you go pick it up again at the store?