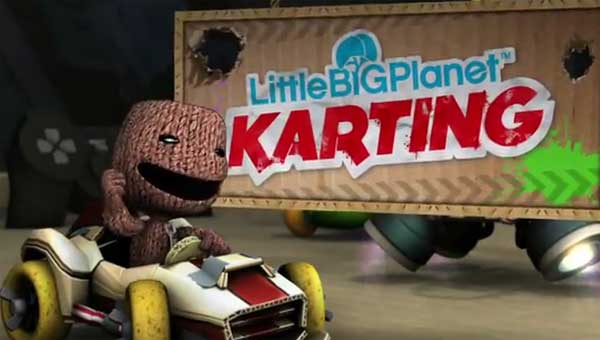 My Sackboy has been getting around lately. Platforming in his own games, duking it out with other Sony stars and  racing. LittleBigPlanet Karting, while usually developed by Media Molecule, was designed by United Front Games, makers of ModNation Racers and Sleeping Dogs. The game was released exclusively on PlayStation 3 with no word if the game will receive a future port on the Vita. Is sackboy a decent racer as he is a platformer? Find out

This game like many of the LittleBigPlanet games open up with a movie followed by a tutorial. The tutorial goes into explaining the controls of the game while also asking which of the two control schemes you prefer which I’ll go into a little later. Upon completion of the tutorial you’re taken to the pod just like any other LittleBigPlanet games. I will make a mention that if you don’t get an online pass (free in new copies, used/rental copies need to pay 10 dollars ) the only thing you’ll be doing with this game is playing locally by yourself as the game has no local co-op mode which is shocking from a kart racer. The other modes that would be locked without the pass are community, recent activity and store. 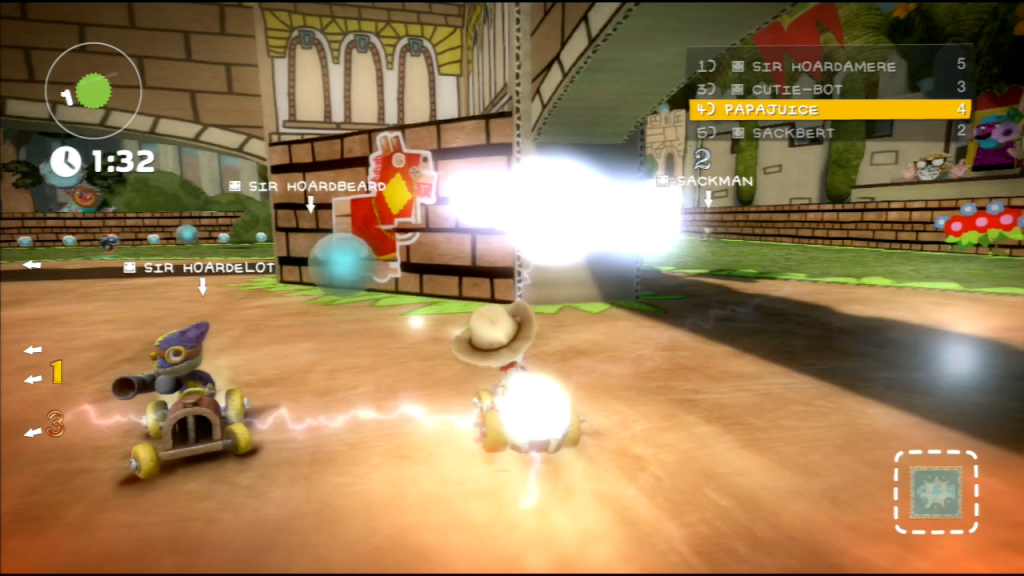 The single player modes all appear on a globe like in other titles but as you continue and you unlock arena levels and other side missions, the map because flooded with too much stuff all at once. While I usually played LittleBigPlanet  with friends and never paid much attention to the story, this racer unlike most kart games has a story as well. As you’d expect you have to resolve issues in the world by racing. For those wanting to know more details, from the digital manual it states “After that nasty bit of business with the Negativitron was cleared up, the Craftverse enjoyed a brief period of peace and tranquility. That peace appeared to be short-lived, as the Creator Curators saw a new problem arise. A mischievious gang, called the Hoard, began pillaging everything in sight. If these little devils continue stealing there will be nothing left! The Creator Curators look upon our little hero once again to save the Craftverse from this menace.”

The main focus for the game is the user created content. Other than customizing your sackboy and kart, you have the ability to create your own levels in your moon. The game offers you tutorials on how to properly build the levels but simple it is not which bummed me out. If you’re able to grasp how to properly use it however, you can make for better levels than the ones found by default in game. My first online match had me playing on a custom map that resembled the creators take on Green Hill Zone from the sonic franchise. Other kart racers make some levels memorable that you always want to recall them but the ones I played here don’t do as much.

Control wise,  you can play this game three different ways. With a standard controller you have two options where as if you have a PlayStation Move, you get a third option. The main focus of the switches in the controller depends on what you want to use for acceleration, X or R2. If you choose X, R1 is your drift/hop button, O is for reverse, [] is to fire items, L1 is to grapple which plays the same role as in other LittleBigPlanet titles and also you can slap an opposing racer to stun them. If you choose to R2, all the buttons remain the same with the exception of L2 for braking, Slapping with the right stick, and X to drift and hop.

Gameplay wise, it contains everything to expect from a kart racer. If I was to compare it to ModNation Racers, it’s a slight step backwards. The pickups you collect can be used for their intended purpose whether its the fast forward item, rocket or glove  to easily get you ahead or using the items defensively to block an incoming item.  You can boost yourself from drifting which is starting to become a staple in kart racers overall. When you’re hit or crash hard into a part of the environment, your sackboy/kart explode in LBP fashion which takes precious seconds away from you. Other times you’ll be using an item to get ahead but as soon as your items expire you could potentially eat another item from the cpu with no chance to defend, you can be stopped at a wall or mid-jump causing you more precious seconds. I noticed sometimes when I respawned in certain tracks where I would be stuck on nothing and had to reverse tobe able to move my kart again. Around the track you’ll spot prize bubbles which unlock various customization items or score bubbles which increase your level score.

Overall, LittleBigPlanet Karting is a decent kart game. Honestly this game isn’t the best for either Media Molecule’s LBP franchise or United Front Games’ karting games. The game felt a bit rushed probably in time for the holidays, if they refined it a bit more, this game could be better. 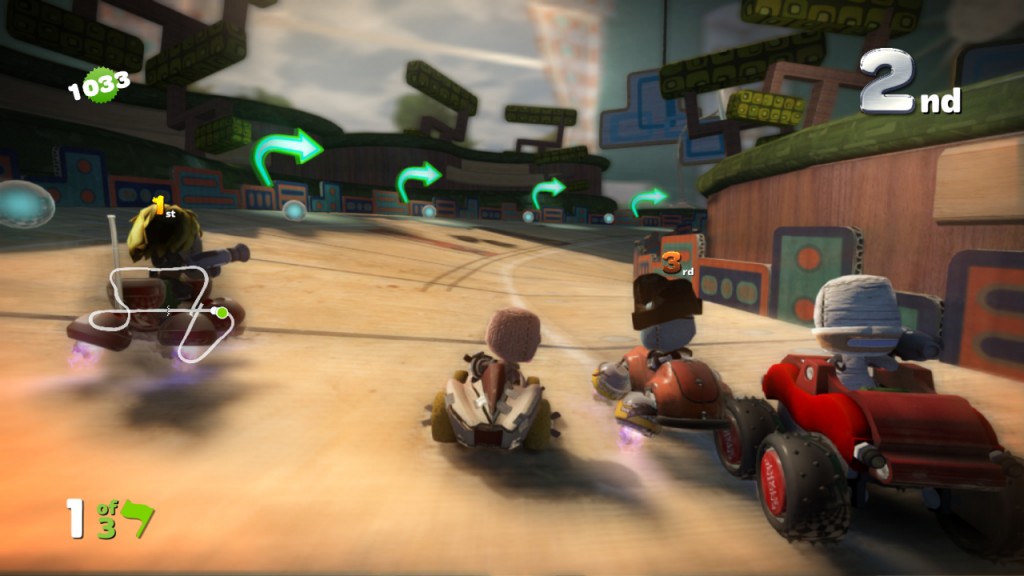