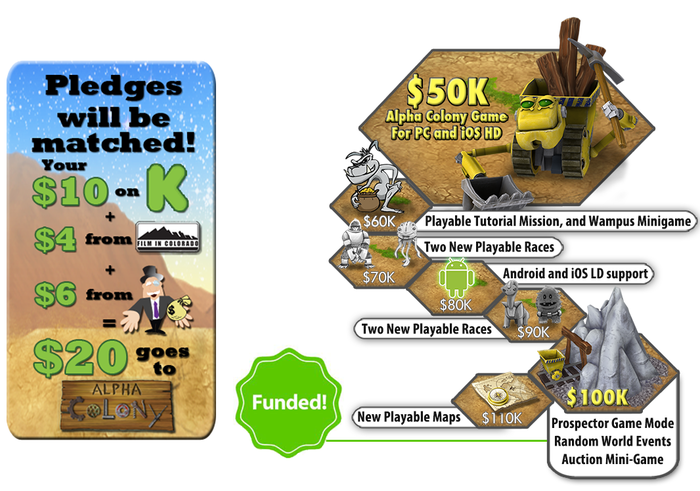 For those that were fans of the mid-80’s perennial interstellar economical multiplayer game known to many as M.U.L.E., then recently there was some good news. The developers at DreamQuest Games who have worked on a number of titles including Nexuiz and Lego Universe, had spawned a brilliant idea to replicate the classic with modern elements taken from the current generation of turn-based strategy games.

The game itself would be named Alpha Colony, and would usher in a new audience to those who enjoyed such games like Settlers of Catan or Carcassonne, all the while providing a more colorful and family-friendly style on the PC, iOS and Android.  Taking inspiration from other independent developers looking to rally a fan base around a brand-new product with a lack of funding, DreamQuest looked to Kickstarter for some funding and support from the soon-to-be fans. The goal in question would be a meager $50,000 USD, over the course a single month. Starting November 2nd, it would be clear that they could make the Kickstarter goal and fulfill their promises.  Now the bad news.

They failed to meet their goal. By December 2nd, their Kickstarter site declared that their goal was unsuccessful, but by how much. They were not off by a few grand, they were not even off by a couple hundred dollars, but rather a puny $28 USD. That’s what separates success from failure, twenty-eight U.S. dollars. To put it into a percentage, DreamQuest achieved 99.944% of what they asked for, and unfortunately it’s either 100% or nothing in the Kickstarter business. A spokesperson for Kickstarter had to step in to assess the situation:

That’s really, really uncommon. It was a tough finish, but unfortunately we wouldn’t bend the rules. Of course, creators can always relaunch a project that was initially unsuccessful.

Currently on the front page of Alpha Colony’s home page, one of the developers spoke on behalf of the team, saying thanks to the supporters and admitting that the likelihood of a second Kickstarter attempt is difficult to pursue.Other information that emerged from all of this is the statement that almost a decade and a half of production has been devoted in bringing  the game to life, and even $60,000 USD has been invested of their own money as well. However, there is a glimmer of hope in the sense that they are clear in not making this the end of the road for this game, and will try again at a later date. It’s a disappointment, but it’s not all bad. If anything, it shows that there was a solid fan following of Alpha Colony, that will one day emerge when the game launches in a hopeful far-flung future.