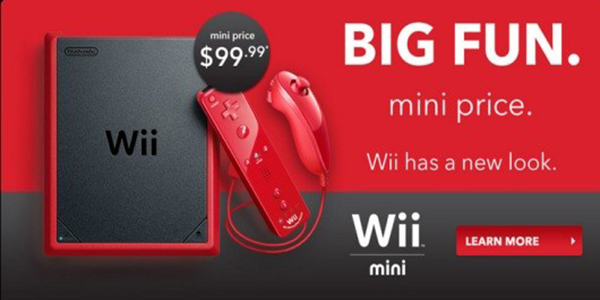 Nintendo has officially confirmed that Canada will be receiving the Wii Mini: a $99.99 version of the Wii, but with no GameCube compatibility, no Internet connectivity, and less size. The whole package will come with a red Nunchuk, a red Wiimote Plus controller, power adapter, sensor bar, and standard composite cable. Canadians can expect the Wii Mini to arrive on December 7, just in time for some early holiday shopping.

You can definitely tell that the Wii Mini is all about cashing in on the holiday shopping craze (note the red motif and cheap pricing). The strange thing is, however, that the Wii Mini (so far) will only be available in Canada this year. Will the rest of the world ever see the Wii Mini? Time will only tell, but I would rather save up, and put the cash towards a Wii U that can actually play both Wii and Wii U games, alongside a boatload of other features.

Check out Nintendo’s official announcement of the Wii Mini here.