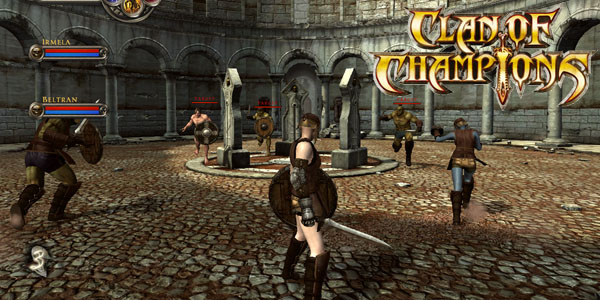 Just recently released for the PSN and a few weeks ago on Steam, the latest game from ACQUIRE corp. takes place in a medieval fantasy setting with a focus on co-op gameplay. There is a versus mode as well, but the majority of my time was focused on the main storyline. I played the PC version.

I decided to play Clan of Champions the way I would normally if I wasn’t reviewing it. I made a character and got right into the single player campaign. Now, to be fair I can see the merit of the multiplayer mode and that’s probably moreso what you should be playing this game for; however, I did have fun with it. The down side is, the brief time I looked, there were no lobbies available for games. Sure, this is probably a smaller title so you’d want some friends to join personally instead of looking for a random group to join.

You start the game by making a custom character. Choosing Human, Elf or Orc, which helps decide your base stats, you then spread out bonus points between your skills. You do get choices between your characters head, face, hair, tattoos, hair color and complexion as well. You’ll then select your combat style, more about that later.

Clan gives you a good tutorial, showing you the basics before you go into the destroyed kingdom to try and locate the artifacts deep within that can make your side of the war practically invincible. Of course, your enemies aren’t too keen on the idea of the army you’re in finding these weapons first and you’ll have many clashes with them throughout the storyline.

The controls are quite good considering I was playing with the mouse and keyboard. WASD controls your character movement, and the mouse adjusts your view and controls high (left click), medium (middle click), and low (right click) attacks. Holding ctrl and clicking activates skills, as does space. You can use a controller as well and yes, an Xbox controller does work. Using the directional pad on the controller does feel faster when you’re trying to pick up equipment, but otherwise I quite enjoyed the PC controls.

At first the battles can feel pretty dry, but as you progress you’ll encounter skeletons and boss-like characters as well. The bosses are basically VIP members of the opposing sides who become the focus of that mission with a stream of additional soldiers coming in to keep your companions busy.

In the single player game, which I assume would ring true for the multiplayer co-op game, you find yourself with two companions, battling through each mission. Multiplayer would be easier depending whom you’re with, but I found the NPCs sometimes got in my way when I was trying to take out some foes personally. The gameplay is pretty much hack and slash, though you do control the height of your blows from low, mid and high which does matter. In each battle, it seems the gear you hit and eventually break off your opponent does get added to the list of equipment available to pick up at the end of the mission.

That part of the game is a bit strange. Equipment dropped in combat seems to be sold off at the end of a mission. So instead of picking up loot of your fallen foes, you seem to buy items you select. I suppose this is to simulate that equipment of your enemies becomes the property of your kingdom. If you wish to improve yourself, you need to pay for that gear. Sort of like a way for your side to fund their battle I suppose. I went through several battles realizing I was getting lots of drops, but no boots. That’s when I realized you needed to knock them from your foes. Not all gear is like this, but it seems boots and gloves do need to be broken free from your foes to make them purchasable at the end of combat.

Depending on the combat style you use from close combat which is basically weaponless, to dual wielding and sword-shield, you’ll occasionally level up that combat type after a mission. These are free to be swapped between by simply equipping your character differently. You do select a default style at character creation but that doesn’t seem to matter.

Leveling allows you access to more skills, of which you can mix and match four combat skills (or magic attacks), and four passive skills. As you continue to level, you’ll get more skills to choose from. Magic is also discovered either through missions or leveling by finding grimoires in combat and getting them translated at the store. Combat style skills can be upgraded as well by spending skill points earned by, I presume, leveling up. Weapon enhancements can also be purchased at the store, which seems to be in the form of adding different colored crystals to add stat boosts to items. I didn’t play around with them too much.

There are 24 single player missions that consist of four difficulties. You need to play through each mission to proceed, and progress doesn’t carry between difficulties. Foes do become quite a bit stronger as you go up in difficulty and it’s best to play your current one through. I decided to try the higher difficulties and the rewards are vast, giving you overpowered equipment if you succeed in outlasting your enemies. The trouble then is, despite a weight limit which only slows your character, you now have a tank that is ready to plow through the game depending on how deeply you get into higher difficulty levels. Mid game, going through the first level of veteran can net you some great loot to make your task a lot easier.

Even with overpowered gear, some of the later battles were a bit challenging. Foes can still knock your gear off you, same as you can break theirs free. In combat you can pick up other gear to wear and then give up to the vendor at the end of the battles, so even if your helm is knocked off, you can scoop it up again or nab another laying around from another combatant.

That is a fun aspect of Clan, that you can grab fallen gear to use in combat. Most of the time I found myself focusing on bashing a foes helmet off to give them a few head hits to take them down quickly. However, mid blows focus on gloves, shields and weapons, allowing you to break those free. Low strikes break off enemies’ boots. So it’s all your preference.

Each mission you can select shows you a story block that contains usually three to four pages of text. These are relatively small, but detailed backgrounds of the battle you’re about to face. Usually each involves a commander of sorts telling you what the mission is either in person or through a delivered note.

Arenas tend to feel the same around mid game as you do a lot of combat in the ruined kingdom. However as the game progresses into the second half you do see some new scenery which his a welcomed addition. The areas are relatively small, and when you get your first indication to advance through a doorway into a connecting area, it is a nice touch. Clan is meant to be played with friends it seems, and keeping combat tight works for that concept. If the single player story had a sprawling castle to explore like Demon’s Souls this game would be easy to recommend.

At first I was a bit put off by Clan, mostly because I don’t think I knew what to expect. But as it went on I found myself enjoying it. Sort of like a medieval themed Earth Defense Force in a way, just with smaller areas to battle in. The biggest down side I see to the game is the price. Currently it is $40 for the PC version, and $30 on PSN. This game feels like it should be played online, and with friends. If it was in the usual downloadable title $10 to $15 range, I could easily suggest getting some friends and having some fun with this one. Don’t get me wrong, there is fun to be had here, but the price tag feels heavy and I think there could have been other ways to monetize this game. A lower price tag would allow friends to buy the game together, and play in their own group.

Clan has a lot of fun ideas, and I absolutely loved the older Tenchu games the developer created before. If we could only get some of the level creation of those classic titles added to a game like this, there would be a lot to do here and it would be instantly recommendable. I miss making stages in Tenchu and letting my friends sneak through them. Of course Clan isn’t Tenchu, but I’m just saying the developer has lots of great ideas that I’d like to see brought together.

Is Clan of Champions a title for you? That’s really up to personal preference. Combat is hack and slash but with a decent variety to choose from. If you have friends with the game, you’ll have people to play with. But unless this is exactly what you want, you may want to look elsewhere. Great developer, and thanks to NIS America for distributing this title over here, but it may have been better to sell this one lower and pushed multiplayer to hopefully pick up the volume. That and the DLC packs for the game just make the price hurt even more. Spoilers ahead but during the final battle I wondered why I couldn’t collect any of the bosses gear after the mission. It seems that it’s being sold as DLC. Lots more could have been done with this game and its engine to make content gamers would have wanted to pay extra for.