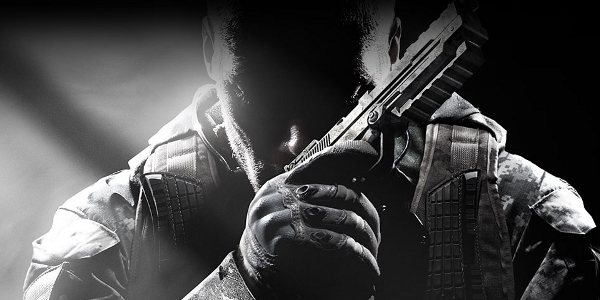 It’s that time of year again. The days are becoming darker; your wallet is getting lighter, and your waist is growing larger. To curb these seasonal blues, Activision is here with Call of Duty: Black Ops II (hereafter Black Ops 2), the ninth entry in the series and the fourth developed by Treyarch. You may not remember there being nine Call of Duty games, and that’s because Activision is cognizant of the stigma sequelitis projects. After Call of Duty 4: Modern Warfare, they dropped the sequential numerical approach and adopted subtitles to differentiate installments. Besides, Call of Duty 9: Black Ops II sounds absurd, and cynical gamers may be less likely to demur Black Ops 2 as opposed to Call of Duty 9.

Black Ops 2’s campaign is set during the years of the second Cold War and also the year 2025. The story features Alex Mason, the protagonist from Call of Duty: Black Ops, during the Cold War segments and his son, David Mason, during the events set in 2025. The dichotomy exists to present the rise to power of the game’s antagonist, Raul Menendez, and how the actions of the father, Alex, and his cantankerous teammate Frank Woods, lead to affecting the life of Alex’s son, David. However, the sins of the father, or more accurately, Frank Woods, are perfunctory, with little exposition provided for David Mason’s rise from military brat to future soldier extraordinaire. Black Ops 2 is enamored with Raul Menendez’s machinations; however, the Mason family ties are tenuous, and with more development spent on Raul Menendez than David Mason, the character arcs for our protagonists end in bathos as Black Ops 2 comes to a close. However, the devotion to fleshing out Raul Menendez, who’s downright Machiavellian at times, does pay off, and his aspirations to start global warfare aren’t rooted exclusively in lunacy. And like any great villain, he has a Number Two. 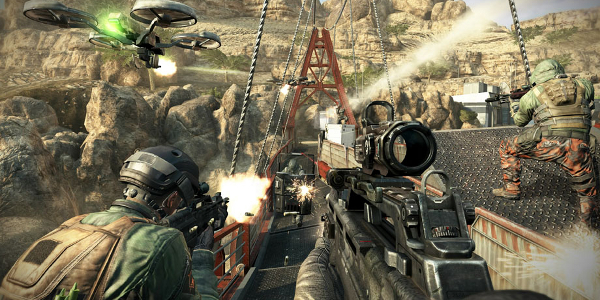 Notably, Black Ops 2 is the first campaign in the Call of Duty series to feature branching storylines, which not only provides incentive to replay the campaign, it adds a shot of true interactivity to a series which has grown stale with its parade of Michael Bay explosions and constant funneling through checkpoints to the next grandiose set piece. These choices are integrated well, and events may pass with multiple outcomes but you’ll be none the wiser. It leads to a more organic experience than hard stops that present you with either A or B to progress. They’re several potential outcomes to the campaign, and even though the gameplay doesn’t deviate from the Call of Duty formula, the ability to customize your load out before the missions adds gameplay avenues you may not have taken with the mission’s default weaponry. Add the branching storylines, larger levels that invite variety to enemy approach, and the gadgets and weaponry of the year 2025, and Black Ops 2 is the most engaging and enjoyable campaign since Call of Duty 4: Modern Warfare.

Also new to the series is Strike Force, an attempt to shoe-horn non-linearity to the campaign. The Strike Force missions present the player with minimal real-time strategy elements mixed with your standard shooting fare, and even though they’re skippable, doing so will affect the outcome of story events, leading to a nagging insistence to complete them. The gameplay found in Strike Force is an interesting experiment for Call of Duty, with a unique “Overwatch Mode” which gives a bird’s-eye view of your squad, drones, and robotics. You can command the action exclusively from this perspective, setting waypoints and issuing commands, or you can take control of any member of the squad or piece of equipment at any time, diving directly into the action. There’s definitely potential here, but its inclusion into the campaign is contrived, detracting from pace of the story. 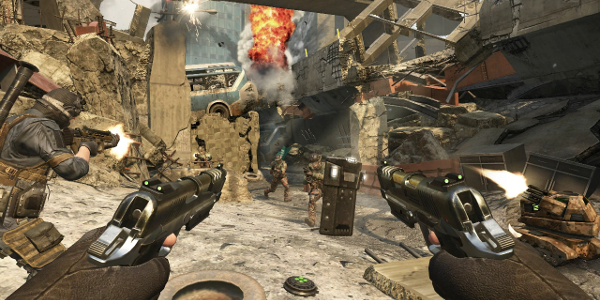 Regardless of what’s new and different in the campaign, for some, it’s completely meaningless; because for them, Call of Duty is about shooting your friends, over and over again, for countless hours. The tried and true multiplayer the series is known for is here in full swing, and instead of the rather significant retooling the campaign received, the approach here is more nuanced in its implementation. Kill-streaks have been replaced with Score-streaks, allowing players to focus more on objectives in objective based modes (imagine that) without being penalized for lack of kills. In addition, custom classes have been revamped with the new “Pick 10” system: 10 points are allotted and they can be utilized in a variety of ways, opening custom classes up for a number of combinations. Weapons, attachments, perks, and the new wild cards can be mixed and matched endlessly, creating a system ripe for experimentation. Multi-team games are also new, allowing matches to host three or more teams, as opposed to your traditional two team setup.  League Play is welcome for players seeking competition more in line with their skill level, and here you can find skill-based matchmaking accompanied with ladder progression as you move up in rank. Wager matches have been removed.

Call of Duty’s multiplayer has always been about high highs and low lows, as matches can swing from feeling like an unstoppable gaming juggernaut with hawk-eye aim to a waste of gaming matter unable to kill a stationary bot, and it’s in this ebb and flow of gaming where Black Ops 2 finds its addictive qualities, because one-more-round is always waiting. The multiplayer isn’t going to win over any new fans, though the changes, albeit slight, pump enough fresh blood into the mode to keep it alive for at least one more year. 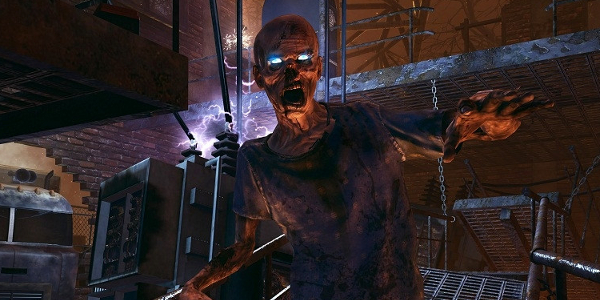 Speaking of keeping something alive, Zombies returns after a year hiatus and the mode has shuffled its way into a more prominent role in Black Ops 2. Zombies now runs on the multiplayer engine, meaning more zombies, more players, and custom games, allowing you to adjust the difficulty or toggle kills to headshots only and so forth. Survival returns, your classic zombie mode, and new to Black Ops 2 is Grief, which allows two teams of four players to fight against each other and zombies. Tranzit is the most significant addition as this is the new story mode for Zombies, allowing players to travel between areas by bus, making for a much larger world to explore and dispatch zombies in. However, nothing has been added to ease players into Zombies, leading to bemusement and frustration for new players. The difficulty is still incredibly punishing if you wish to tackle Zombies alone, and the aforementioned story aspect is virtually non-existent. If you’re a fan of the mode there’s still plenty of zombie killing to be had, but overall it feels like a missed opportunity for something special; something that had the potential to wrestle the zombie killing crown away from Left 4 Dead, but instead it’s the Zombie mode you’ve played before with a more robust community.

When you add all these modes up–the improved single-player campaign; the addictive and highly customizable multiplayer, and the still tense Zombies–you have quite the content rich package, with enough hours of gameplay to arguably last until the next annual installment of Activision’s 800 pound gorilla. The question is if it is worth it to move on to Black Ops 2 from Call of Duty: Modern Warfare 3, and the answer is a resounding yes.  Treyarch could have mailed the campaign in but instead delivered the best one in years, and their tweaks to multiplayer are subtle but substantial enough to shake off the feeling of been there done that which, for all intents and purposes, should have settled into the Call of Duty ethos by its ninth entry. And for what it is worth, Zombies is still an amusing diversion.