Very few instances in American history have a greater importance or significance than the Revolutionary War. It marks a time when the colonists stood up to their motherland and fought for freedom and independence. We all know the story… or do we? What if there was a more sinister plot that the history books left out? What if the Templars & Assassins secretly altered history for what they believed was the true vision of America? I can’t think of a better point in history to bring one of the most intriguing fictional storylines in gaming today.

Without ruining too much of the opening sequences, you start out as Haytham Kenway which isn’t the actual main protagonist of Assassin’s Creed III. It’s a change of pace for the series and will probably surprise most when the plot comes to fruition. Fans of Desmond will be pleased to find out that he is also still controllable during certain stages of the game. As for how Conner, the Assassin, ties into the plot of things–well the people at Ubisoft did a fantastic job of giving you a reason for vengeance as you will see through the early game progression. The plot is actually very well written. It’s filled with twists and turns and plays out nicely if you stick around to see the end.

Never has this much detail and life been breathed into an Assassin’s Creed game before. The Colonial-era Boston and New York are full of little things that make the overall ambience of each city come to life right before your eyes. From dogs barking at cats, to newspaper criers shouting out about the latest edition, and busy food markets –these cities are living. Apart from the two cities you will spend a lot of your time in, there are also two other areas that you will free-roam in: The Frontier and the Homestead. 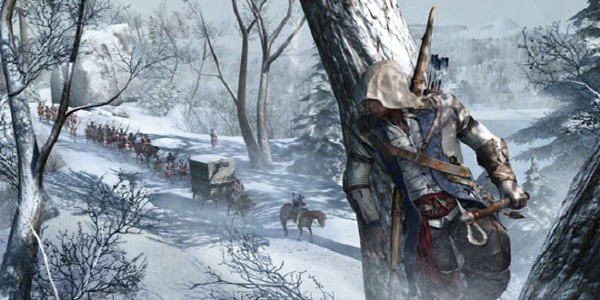 The Homestead serves as your “central hub” where you can do a number of activities. Throughout story progression you will be able to do side quests that will attract all different sorts of people to your humble settlement. From woodworkers to doctors, farmers to smiths and many more–there are plenty of people to recruit to your homestead. These talented people are the replacement for most of the stores you can recall from the previous entries in the Assassin’s Creed series. While some will say this is a distraction from the main storyline, it’s not required to do these. But if you do take the time to settle these people the benefits are worth it. Each of these unique settlers brings something different to the table. Woodworkers will supply you timber supplies and farmers will sell you vegetables. All of these are used for recipes that can upgrade your pouches, your arrow quiver, or even give you an extra convoy to send to the cities to sell your goods. Recipes are found in a few ways, mostly by finishing missions and opening chests.

As for the Frontier, a whole new aspect is brought to Assassin’s Creed III: Hunting. Sure it may scream Red Dead Redemption, but it works. All different types of wildlife can be found throughout the Frontier (and the other three areas as well). You have your docile creatures like hares, beavers, and deer as well as the predators that will attack you, ranging from wolves and bobcats to bears. Predators don’t pose much of a problem, even if you get caught off-guard. Most times a simple two button QTE will end the creature’s life and leave you to skin the animal for pelts, teeth, and claws among other things. You can even lure enemies into being attacked by the wildlife! Again, it’s a distraction from the main quest, but it gives players that are looking for more to do within the game something different.

Probably one of my favorite parts about this game is the naval battles, particularly a specific naval battle that is fought in a huge storm. It almost reminds me of the Pirates of the Caribbean movie (without the huge maelström). The effects and physics are just mind-blowing. The waves crashing into your boat spewing water all over the deck, managing the wind current so that it’s in your favor, then lining up to blow a rival ship clear out of the water! I’ve never played an easier more beautiful naval battle in any other game. The ship, named the Aquila, can be upgraded as well with features such as a battering ram, more cannons for even greater firepower, and a better hull to withstand punishment. In addition to naval battles, there are also privateer contracts that you can take part in. Most of these are pretty straightforward: find a ship, defend it. Variety may be in short supply here, but controlling the ship and partaking in these battles is so much fun. 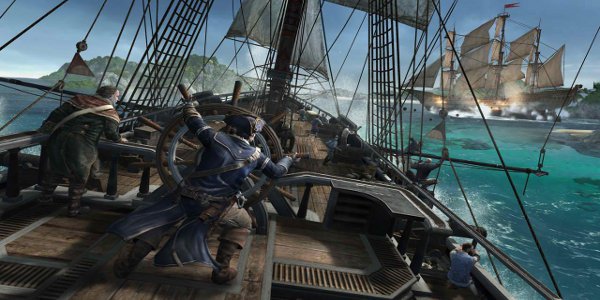 That’s not to say that Assassin’s Creed III isn’t without its flaws though. One of my biggest pet peeves is the use of the same dialog with the same voice actor/actress. I can’t stand it. From the first delivery side quest that is done, all four of the targets I delivered to had the same lines with the same voice. There really is not an excuse in this day and age for this. Surely there are enough members on the development team that could lend their voices to make the dialog not so repetitive. It is a minor flaw, but an annoying one to say the least.

Sometimes the character models would actually walk through each other too. I noticed this several times during cut scenes where Connor would be walking and part of his arm or body would just ghost right through a by standing NPC. It’s not game-breaking, but visually it’s really unacceptable giving the standard that has been set by previous games in the series.

Those experienced in the combat from the previous entries will find that the formula has been refined and improved upon. The free flow combat has always been a staple of this franchise and there are a few new neat tricks that have been implemented. One that stands out to me is when the British are getting ready to fire upon you, the nearest target you can find to grab instantly becomes a human shield with a simple push of a button. The battle animations have seen an overhaul with takedown sequences that are visually stunning.

With such a big stage as the American Revolution, history buffs will notice plenty of familiar locations such as Bunker Hill, the Boston Tea Party, and the famous “The British Are Coming!” sequence. Nothing has been spared in terms of the history surrounding one of America’s greatest wars and it will almost make you feel like you were really there. 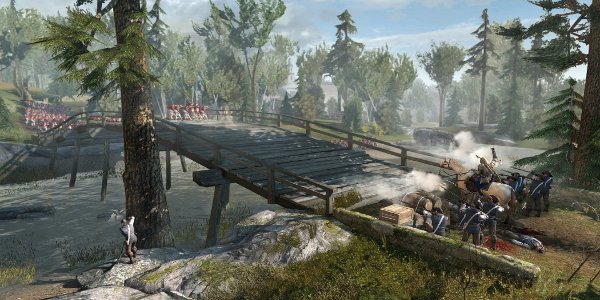 The multiplayer aspect of Assassin’s Creed has always been one of the most unique experiences I’ve played to this day. This has been improved upon ten-fold with new game types, even more customization options, rewards, and perks. It’s such a big part of Assassin’s Creed III that it ships on its very own disc! I’ll be the first to admit that I shuddered at the thought of multiplayer in a single player game when it was first announced for Brotherhood. But I was completely wrong about it. Assassin’s Creed III’s multiplayer is well-balanced; there are team-based match types such as Manhunt which is extremely satisfying, as well as a territory type called Domination.

For those who are into co-op, Wolfpack will be your new best friend. Join up with your buddies while trying to coordinate perfect kills in a timely and assassin-like style. Think of it as horde mode for Assassin’s Creed. There are a total of 25 waves for you and your friends to work through that get progressively harder the higher level you get. We all know that the competitive modes are there too for those who love to showcase their skill in Deathmatch, Wanted, and Assassinate.

Assassin’s Creed III set out to be more ambitious than its previous entries. In most ways it surpasses the mark, while falling short on some technical issues. Perhaps with a future patch, this game will be everything it should have been when it launched. It’s not perfect but with the unique, satisfying multiplayer that has been a staple to the franchise and the intricate web-weaving storyline makes Assassin’s Creed III a game that will keep you occupied for a good 20+ hours.