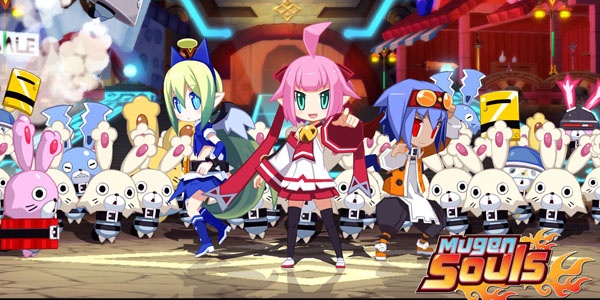 Naturally, your regular NIS game spoiler warning comes into play here. I’ll do my best to keep spoilers very early game focused so nothing major is given away, however there will be some plot points that will need to be explored since through gameplay is how you unlock some of the main features of the game.

To me, Mugen Souls feels more like an episodic anime than any other NIS game so far. It harkens back to classics that follow a similar formula in each episode. In this case, lady Chou-Chou the self proclaimed god of the universe decides the seven colorful worlds are cute, so she desires them for herself. With the ability to turn anything she desires into her peon, she sets off with her companions, a failed demon turned half angel, and one of her peons through whom she gained her starship. It’s her goal to visit each world and turn it’s hero and demon-lord into a peon in order to take control of the world for her very own.

So that’s just what you do. As lady Chou-Chou, you travel from world to world which consists of two continents. Each continent is a decent sized area map, probably best compared to your usual Final Fantasy XII outdoor area for example. You wander about from story point to the next, all the while coming across monsters which you’ll battle if you come in contact with them. Mugen does give you the option to attack in the wandering area so you can get a surprise attack on your foes if you strike early.

It’s here where Mugen hits it’s first unfortunate snag. It pains me to say this because I’m a huge NIS fan, and there is quality content to this game. When you enter the first world you’ll probably notice the frame rate plummet. This is very noticeable and very low. The speed of the game itself doesn’t seem affected, just the actual frames per second. If you change your PS3 options to output at 720p you will notice increased performance thankfully.

While we’re discussing this, lets get all the ugliness out of the way now. When you or the monsters attack in battle, there can be an extended pause between your confirmation and the actual action taking place. At times it can be upwards of three seconds, which may not seem like a lot but it becomes quite noticeable. Loading times between areas can also be quite lengthy. Which is a shame since exiting back to the ship restores your HP/SP. So early on you’ll probably want to battle some baddies and then exit back for a refresher. This slows that process a bit.

Getting back to the core mechanics, each of your characters has a proficient weapon of which you can buy or find upgraded versions of. Like many NIS games there are ways to improve your weapons as well. Each character is allowed one accessory item as well. You also have skills galore you can earn and choose from as you level up.

One thing I didn’t care much for, but thankfully is something you can skip, are the linked attacks. Whenever other characters on your side is going to take their turns after you, they’re added to a link attack when you do a normal attack. As I said, these can be skipped, but when you’re trying to plow through enemies it becomes a distraction when the game slows down those extra seconds to load the link attack animation when you just want to use your characters basic weapon and be done with it. Naturally too you can set all battle animations to be skipped, but that means any and all. Even your character raising a blaster and firing a shot is skipped. It also skips all animation from ship battles. It would have been nice to be able to select separate animations that could be deactivated individually.

All of this doesn’t mean there isn’t a fun game here, but the other question is if it’s the game that is right for you. Mugen Souls is an entertaining game that isn’t meant to be taken seriously obviously. But it is quite perverted at times and can seem sexist. I’m sure it’s not the intention of the game, but moreso just to have extreme emotional takes on Chou-Chou that are supposed to make clear variations of girls people could desire. That isn’t as shallow as it sounds either, as this is actually the theme in the whole peon creation process of the game.

Chou-Chou can transform into seven different forms besides her egotistical regular self. Each is very extreme to their archetype. The main egotistical Chou-Chou is confident and demanding. The masochist transformation however is meek and apologetic. Ditzy Chou-Chou is clueless and stereotypically a blond girl. Another example is the terse version, who is a purple haired goth girl who is quiet and distant. These characters do actually play into the story too and aren’t just a mechanic to collect peons in the game.

In battle, these characters become important because you’ll want to use them to basically seduce enemies into becoming your peons. You’ll target an enemy, look over the type of girl they like, and preferably use that one to lure the enemy to your side using what is called Moe Kill. The game literally tells you if a monster prefers the ego side, ditzy, terse, and so on. It becomes a problem however when on top of all that you need to puzzle out what feelings to focus Chou-Chou’s replies on based on the monsters current emotion displayed in an emoticon of sorts in their stats window.

I’m still working at understanding exactly how this works, so it is a learning curve to figure out what emotions work best with what feelings. After you select from three sets of two options you’ll be treated to Chou-Chou throwing related comments at the enemy in an attempt to woo them. At times this is cute and funny, others it can be embarrassing depending who just walks in the room. The game is rated T for Teen, but when the dominatrix version of the main heroine is yelling about teasing you until you burst, it can lead to some awkward moments trying to explain that to someone else. I’d recommend starting with, “She’s only saying that to convert a monster into a peon to help her take over the universe!” which will probably either get them to sit down with you or look sideways and slowly walk out of the room.

NISA may have noticed some of the issues and to help speed up gameplay you can pick yourself up some DLC from the PSN store to improve your characters. About the only thing you should be cautious about is how overpowered it can make your characters. It does give you some clothing options and brings lots of others into your price bracket though. So if you are struggling with the slowdown and just want to get into the story, there’s an answer out there for you.

There are also space ship battles which basically involve looking at what Ryuto is trying to tell you and making an educated guess about what to do next. All in all I didn’t have much of an issue with these battles. Using the main reflect and attack abilities usually helped me get through each encounter. Also included are your usual ‘item world’ kind of battles. In these ones, called the Mugen Field, you don’t enter and level items. Instead you bet Mugen Points before going in to battle and then fight groups of monsters in succession. Occasionally you’ll come across a slumbering boss and then by the tenth level you’ll encounter your first actual boss. Like item worlds from other NIS games, you’ll get a break at level ten and get to see some unique stores to spend Mugen points on to add various changes to your characters or even to the Mugen Field rewards by adding hinderances.

As usual, Mugen Souls is full of content. If you’re up for level grinding and trying out a somewhat different battle system focused on area of movement in a circle, rather than a tile based system, you’ll get a kick out of this. Moreso I’d recommend this one for the story to any fan of comically sexualized anime. The plot is deep with secrets as NIS fans will be used to, and you’ll have lots to uncover as you play through the game. Though it is marred with technical problems and the awkward moments could put more innocent fans off, this game is just about having fun and possibly even joking around about how shallow attraction can be at times. 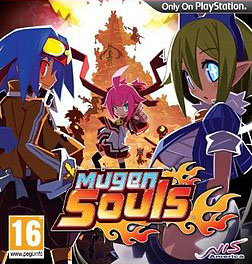