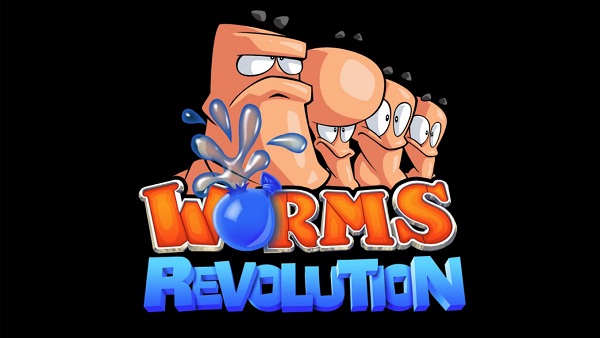 If you were to think about video game franchises that have had a constant stream of releases in spite of economical and cultural shifts in the last few years, you would immediately point fingers at the more obvious Mario, Legend of Zelda and even Call of Duty as of recent. However, no one would ever mention Team 17’s algebraic trajectile strategy franchise, or better known as the Worms series; a franchise with more than a dozen titles to its name on everything from the Amiga to the Xbox 360. Truthfully, the only reason that people often forget about Worms is the fact that the franchise hasn’t made a successful impact to the gaming scene since Worms: Armageddon in 1998. For years, the blokes at Team 17 have been grasping at straws to return to that gold standard, and this year’s attempt comes in the form of Worms: Revolution, with a name that should invoke promises of a radical shift to the franchise which it does, and does not.

If you are unfamiliar with the Worms franchise, it’s all about turn-based strategy on a two-dimensional plane as you use an army of comical worms to kill other comical worms using a plethora of weapons from the more obvious of weapon choices like bazookas and grenades to the downright absurd like explosive Old Women and Concrete Donkeys. While this formula remains unchanged since the first game, there are a few new elements that will ensure for more tactical prowess. For example, Worms: Revolution’s biggest addition is the usage of Dynamic Water. Aside from the base of water for which if you knock a worm into it results in immediate demise, Dynamic Water is often found on the actual map itself, as well as creating it series of water-oriented weapons. This can be used to drown out the enemy without knocking them into the great blue, or simply wash them out to another location on the map. Another key addition are actual physical objects; along with the more obvious petrol barrels and land mines, some levels may have objects embedded in the map and can be destroyed which (and this comes to no surprise) will explode with the off chance that some certain items will have environmental effects like poisoning from explosive chemical glassware. They seem novel in their usage, but ultimately feel like glaring targets in a game where precision is key. 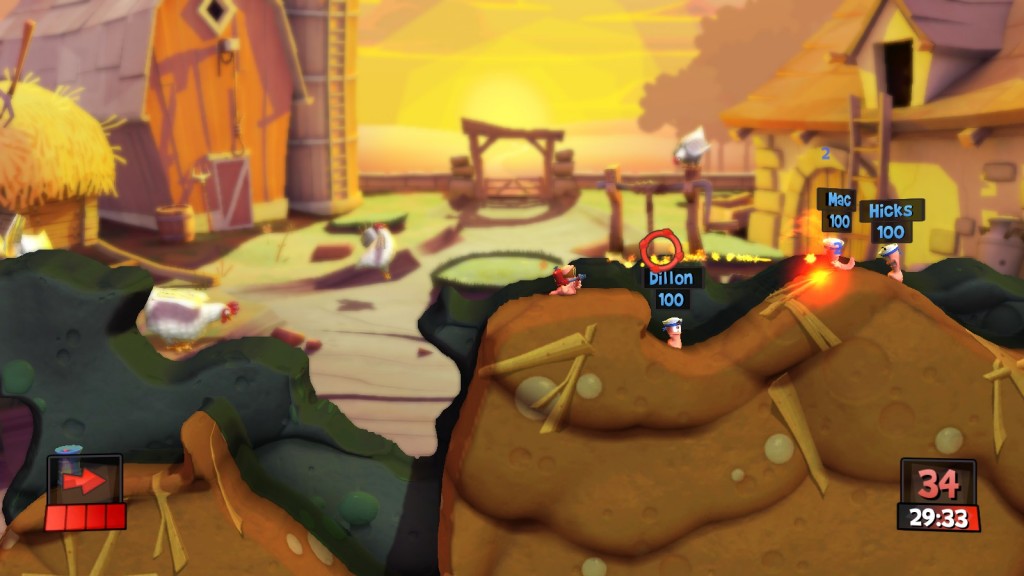 The single-player modes are a lot more fleshed out, thanks in part to the addition of legitimate writing and voice-acting. If you have a game made in the United Kingdom that offers up 3D characters playing on a 2D plane, you have to hire multi-BAFTA winner Dean Wilkinson to write for you. Now if you are expecting commentary on how to play the game from the former of the Fry & Laurie duo, I regrettably say you will be disappointed. However, you will get commentary from none other than MATT FREAKIN’ BERRY! Now, if you have no idea who MATT BERRY is, I urge you to look up anything pertaining to Garth Marenghi’s Darkplace, Snuff Box or even the IT Crowd. With that said, the single-player boasts three genuinely different modes to choose from: Campaign is your traditional go-to for deathmatches against the enemy, Puzzles are where you must achieve a certain goal with a single worm and with a number of limitations in the environment and inventory, and finally there is the Farmyard Face-Off Diaries, where you are given a selection of worms to fend off against the enemy in a semblance of some story that ties it all together. Much like Worms games in the past when it comes to single-player, it feels painfully easy the first few levels and becomes ruthlessly vicious beyond it. In situations where the enemy can perfectly gauge wind and angling for maximum damage, it can be enough to drive a person to stop playing the single-player mode after a certain point. The multiplayer at least feels competent, even including ranked games and the various modes to play from like Shoppers, Roperaces and the more forced game play option of Forts. Sadly, it all seems dedicated towards online play, as multiplayer locally on a single PC just doesn’t translate well in this game.

Just setting up the game feels odd as well; you cannot create teams, and instead you have a collection of worms tied to your account. This means that if you were to create multiple teams, you have to acquire multiple worms, and to acquire multiple worms, you have to buy them with in-game currency that’s earned by playing the game. To make things more complicated, you can now select a Team Fortress 2-esque team: Soldier worms are your typical units, Engineers enhance more technical weapons, Scouts are fast but weak, and Heavies are strong but slow. This adds some depth into the strategy realm, but it feels like the whole idea of Worms is to have an even playing field for every player and let their strategy decide the outcome, not diluting it into a half-hearted rocks/paper/scissors formula. 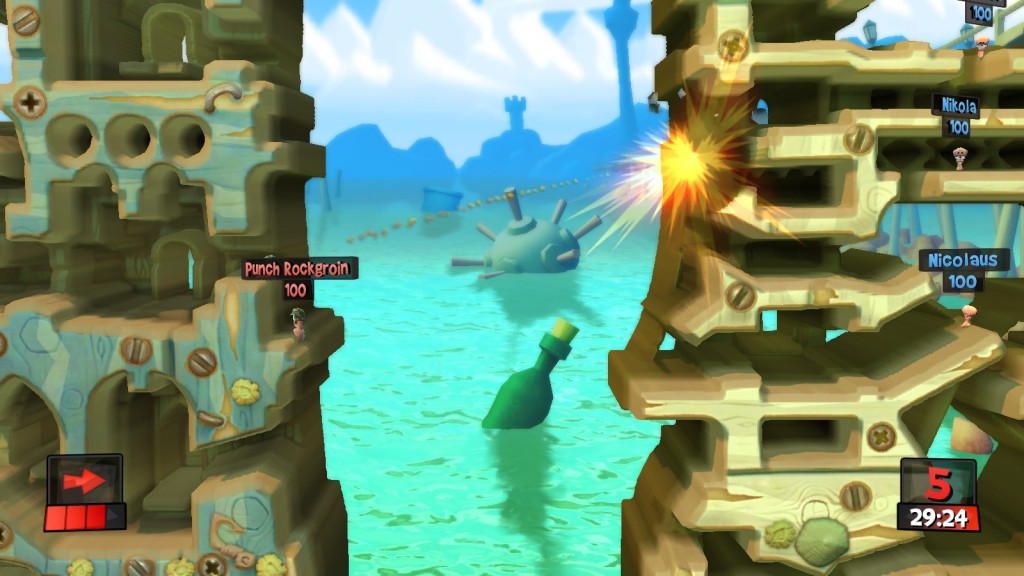 Worms: Revolution feels like Team 17 did everything in its power to take the franchise one step forward, but immediately goes backwards in forgetting what made the series so great to begin with. Instead, the sum of the game took pages from a number of current games out on the market and found themselves attempting to make something that would appeal to today’s gaming market. The floaty design choices, the promises of plenty of DLC, the customized options that no one dared asked for, it all feels like someone took a PR meeting into the development studio and locked the door. Sadly, it would just be a better option to just acquire Worms: Armageddon and enjoy Team 17’s finest hour instead of this, at least you don’t have to pay $4.99 USD to unlock the Skunk weapon. It evens shames me knowing that MATT BERRY is involved in this, maybe in the next game they could hire Richard Ayoarde instead.