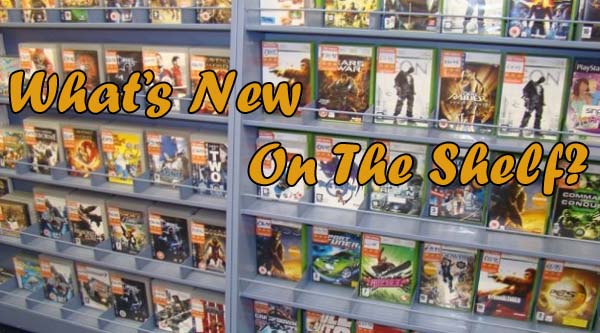 Welcome to “What’s New On The Shelf”, a hopefully weekly segment that gives you the rundown on all of the latest games to be released at retail in North America (with the exception of PC because let’s be realistic Digital Distribution owns that platform). For right now this only includes physically boxed product but hopefully we’ll expand this feature depending on how well it is received!

Without further-a-do let’s get going, because there a lot of releases leading up to the last week of October.

Electronic Arts takes another stab at modern military supremacy with a sequel to 2010’s Medal of Honor reboot. Once again the game features a mix of worldwide combat experts from several different countries. Players can expect to take on roles like Assault, Sniper, Demolitions, Point Man, Heavy Gunner, and Spec Ops. The game’s multiplayer has also changed, it is no longer being developed by Battlefield 3 dev Digital Illusions, instead it was developed by Danger Close Games internally.

Will Broken Joysticks Be Reviewing It? YES –We picked up a copy on launch day and will be reviewing it promptly.

Microsoft’s premier racing title returns just one year after the release of Forza Motor Sport 4 with a new title aimed at a brand new audience and under the command of a different developer. Developed by British team Playground Games Horizon pits you in the role of a driver working their way across the open world racing circuits of Colorado. Rather than the simulation angle found in other Forza titles, Horizon takes things a little less serious featuring collectable wristbands, shortcuts and chained combos.

Will Broken Joysticks Be Reviewing It? NO – Sadly we could not secure a copy of Forza Horizons during release. It will probably not be reviewed by us.

Capcom’s latest fighting game makes the jump to handhelds with the release of the Vita edition of Street Figther X Tekken. Pitting an entire line-up of Namco’s finest fighters from the Iron King tournament against a roster of game Street Fighter characters who originate from multiple games is a fighting fanboy’s dream come true. Featuring Capcom’s classic formula of super moves, arcade action mixed with just a dash of new game play elements and a tag a system make this worth the price of admission. The fact that the vita version also comes with the previously add-on only 12 character pack makes the deal even sweeter!

Will Broken Joysticks Be Reviewing It? YES –We picked up a copy of SFXT for Vita on launch day. Look for our review soon

PC Exclusive (other platforms under consideration)

Stylized 2D platformers have seen a bit of a resurgence after the likes of Super Meat Boy becoming an indie darling in 2010. Black Forest Games return to their Giana series (it started on the Nintendo DS) with their follow-up Giana Sisters: Twisted Dreams. Players take the role of teenager Giana as she navigates the twisted world of her own dreams. Using her ability to change her dreams, and herself she is able to change between “cute” and “punk” modes granting her different abilities. Right now it is PC only but a PSN and XBLA version are planned.

Will Broken Joysticks Be Reviewing It?  YES – A review copy was provided. Look for our review soon!

Ready to leave that busy city life for the exciting rural countryside? No, I didn’t think so but if you’d rather play the life of a farmer in the virtual space then Farming Simulator 2013 might be for you. Ok.. ok.. admittedly this game is not for everyone, now that I think about this WHO IS THIS GAME FOR? Surely real farmers aren’t going to finish their day of milking cows, harvesting crops and whatever else they do to play a simulation..

Okay.. my brain is broken I need to sit down and rest, just watch the below trailer and be amazed.

Will Broken Joysticks Be Reviewing It? NOPE.. Seriously, this entry is mostly a joke. We’re sure Farming Simulator at least has somewhat of a following or they wouldn’t have made like three of these things. We will not be covering it.

Well, that about wraps it up for this week in new releases, there is a lot on offer. We’ve got everything from a proven fighting cross over to a military shooter. Next week sees the release of two big games from Ubisoft as well as the lead up to one of gaming’s most anticipated titles, the return of Master Chief! The fall gaming season is just heating up.