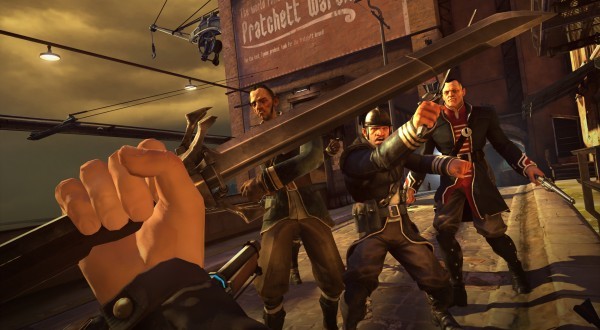 High towers rise up, overlooking long-neglected ruins.  Plague runs rampant throughout many of the city’s districts.  Houses and apartments are fitted with reinforced blast doors, the sign of another family lost to the powerful and fatal disease.  Train cars trundle about down the narrow streets, brimming with canvas-wrapped bodies.  Corrupt and power-drunk city watchmen prowl the streets, looking for any opportunity to inflict pain and suffering on the survivors.  Huge whaling ships float by in the harbors, off to search for more of their bounty and it’s life-and-power-giving properties.

In Dishonored, you take the role of Corvo Attano, Royal Protector of Empress Jessamine Kaldwin.  Without getting into too much detail so you can experience the opening story on your own, you are falsely accused of Empress Kaldwin’s murder, and furthermore implicated in the kidnapping of her daughter and heiress, Emily.  From here the storyline follows in themes of vengeance, justice and setting things right, which means clearing Corvo’s name and finding and rescuing Emily from her captors.  It is within this backdrop that Corvo takes his training as Royal Protector and redirects it into a new life as an assassin. 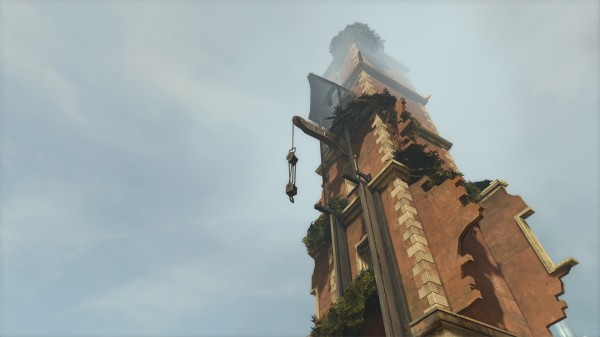 When you first delve into this world created by Arkane Studios, you are struck by the art design.  They went for an almost moving-painting aesthetic, and it pays off in a big way – the game is quite visually appealing.  A disappointment to note here though is the resolution of the environmental textures.  The aforementioned painting-in-motion technique looks great at a bit of a distance, but if you get at all up close to a wall, prepare to see a good bit of pixelation.  It’s important to note, however, that this disappointment is only one small little nitpick in an otherwise fantastic visual compendium.  One note here – I would recommend you install the game to your hard drive to avoid texture pop-in, as it is much more noticeable when not installed.

The main mantra of Dishonored is “play your way” – if you’d like to go through a level guns (or swords and crossbows) blazing, implementing a leave-no-witnesses policy, you’re free to do so.  If you’d like to silently sneak around, saving your blade for just your target, you are free to do that as well.  If you are a middle-of-the-road kind of player, you can certainly proceed with a healthy dose of both.  With a game that allows for such freedom in game play, it is also refreshing that the different play styles actually impact the future areas of the game and how the story unfolds.  So in one play through a level, I took a more run-n-gun approach, and was greeted by increased security and a more locked-down level to follow, complete with watch towers and tougher enemies.  Had I slipped around everyone, taken out my target and then disappeared, that next level would have been far more open with less of a show of brute force waiting for me to arrive.  In a nutshell, the mechanic works and works in spades. 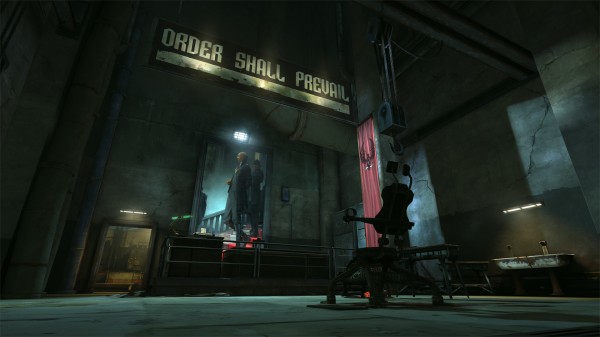 In support of this gameplay mechanic is a bevy of gadgets and supernatural powers.  Corvo can utilize his sword of course, but he also has a pistol, a crossbow with three types of darts (normal, sleep and incendiary), grenades and spring razors (think land mines that throw razors as shrapnel).  From a supernatural power perspective, the ten varieties include teleportation across short distances, the ability to see through walls to understand your adversaries’ positions and field of view, and possession of other animals (or humans, if upgraded).  My favorite power that supports a stealthy play-through is Shadow Kill.  In its first level, any enemy killed by Corvo without them being aware of his presence will disintegrate into ash, leaving no corpse behind which could be found by other baddies (or rats or hounds).  Upgrade to the second level and that same result will be granted to any kill, whether or not they are aware of your presence.  These powers can be unlocked in any order, once again quickly enabling you to choose the way you want to play.  It’s a great setup.

So how do you unlock those powers?  Simple, really.  You just find runes scattered about the levels, which enable the unlocking (or upgrading) of those powers.  You want more customization options?  It’s not enough to give you literally numerous ways of going through the story line, and with a good bunch of weapons and powers?  Ok, they have you covered here too.  In addition to the runes scattered throughout the brilliantly-designed set pieces, be on the lookout for bone charms.  Think of these as Fallout-esque perks that change different minor (or major depending on your perspective) aspects to your character, like slightly increasing your health bar, or enabling you to climb up and down chains more quickly.  The right combination of activated bone charms can be the key to you passing through a level.  Still not enough?  Ok, how about an inventor friend who can upgrade everything from ammo capacity, weapon accuracy and rate of fire, to optics within Corvo’s mask?  As I said, there is a staggering amount of customization to be had here. 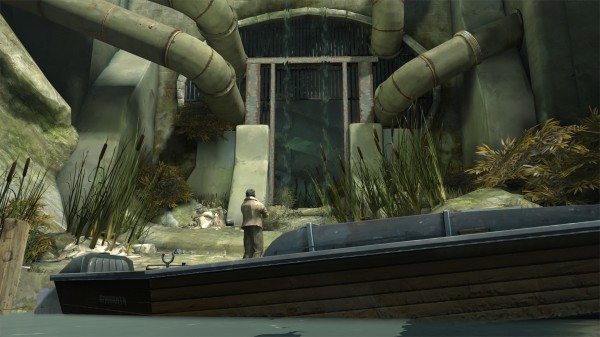 I would be remiss in my role as a reviewer to not mention a few other things that could have been more fleshed out or better executed.  The enemy AI seemed to be a bit on the dumb side – Let me provide a brief example.  In a scenario where I had already alerted a group of thugs and they were slowly making their way around the area, calling out to me and doing their best to ferret me out, I perched up high and sent an incendiary crossbow bolt into the head of one of them.  He was instantly engulfed in flames, flailing about in a slow and painful death.  Two of his colleagues-in-thuggery never strayed from their routes of looking for me, both of whom passing by this guy dying a horrible death just feet away.  There was no change in their behavior.  Also, if you pay attention to the animation of players in the game you’ll see a fair amount of hands clipping through faces, or NPCs clipping through environment set pieces.  These are not major things, but they all added up to occasional annoyances.

At the end of the day, I feel comfortable saying that Dishonored is simply a game that everyone should play through.  It is a refreshing departure from the norm of endless sequels being released in recent years.  Arkane Studios took a chance, and while there were some missteps along the way the awesome stuff far outweighed those.  It does not have a multiplayer component, for which I once again tip my hat to Arkane.  I do not believe it would have worked in this world, and quite honestly the game does not need it to inject a kind of artificial longevity to it.  You can replay every mission once you beat it (and you will start with the same equipment that you had when you first tried the level initially) to try every different tactic you would like to.  Again, this is game everyone should play, especially other developers.  We are getting bored with endless sequels, guys.  Take a page from the book of Dishonored; let’s work on some fresh new IPs!