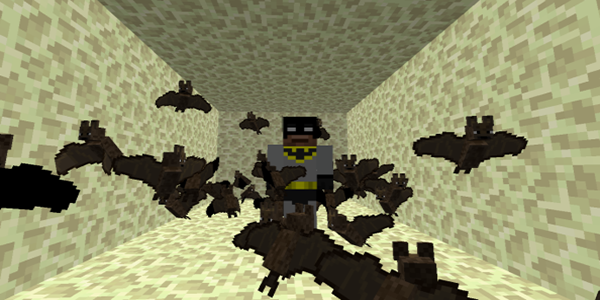 Bats have always been known to be real pains in the neck when exploring through a cave (Pokémon fans can probably attest to this). However, the bats that’ll be in Minecraft‘s spooky 1.4 update for October won’t actually do anything to you (well, they might frighten you). They’re only going to be active during the night, and will escape if you disturb them. Don’t expect any amazing loot to drop if you slay a bat, either.

The update doesn’t stop with just bats, by the way, if that’s what you were thinking. No, you can also expect new sounds for tools, mobs, water, and even footsteps! Plus, there’s going to be witches with pointy, magical noses.

The Mojang team is working to try and release update 1.4 around Halloween, to fit with the whole creepy motif. Visit Minecraft‘s official site here and see the blog post with the info on bats and improved sounds here. Also, this news is only about the PC version of Minecraft, other platform versions weren’t mentioned.