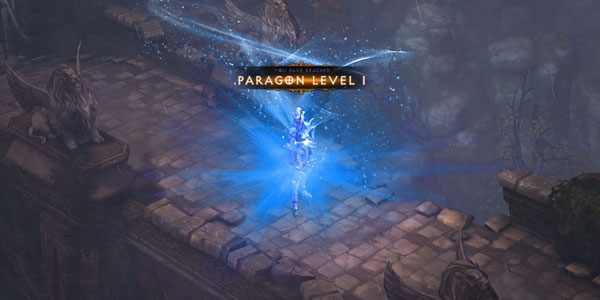 Blizzard has been eager to add reasons for players to keep enjoying Diablo 3 long after they’ve completed the main story line. The new paragon leveling system announced today seems to be a great addition. Originally reaching level 60 just left players in an item hunt with no where else to go with their characters. The paragon system adds 100 new levels that begin at level 60.

A big issue for level 60 players has been finding magic gear to continue improving their character. Some players had Magic Find stat boosting sets of equipment they’d switch into before defeating enemies to raise their chances of good drops. This upset other players who were against the gear swapping concept. So every paragon level rewards you with 3% Magic Find and 3% Gold Find boosts. As well as core stat boosts like you’d get from a normal level up.

It will be interesting to see where this new concept goes. For more details straight from blizzard on this new system continue to read more.

Here’s how it works:

We know that a lot of you out there are level 60 — maybe on multiple characters — and this system provides a way to make progress every time you log in to the game.

To support the new system, Nephalem Valor (NV) will now also provide a 15% experience bonus per stack, applicable toward Paragon levels. The first Paragon level should take about as long as it took most players to get from level 59 to 60, and the experience requirement will rise from there. The time to reach the upper Paragon levels approximates the long-term time investment required to get a level 99 character in Diablo II.