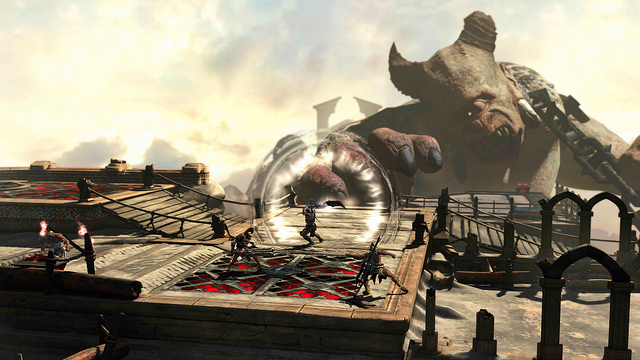 At Gamescon, Todd Papy, Game Director at Sony Santa Monica revealed information about the multiplayer in God of War: Ascension.

You start by pledging your allegiance to one of four familiar Gods: Zeus, Hades, Ares and Poseidon. Each God shall bestow a unique combat style and abilities in battle which is critical to their path.

Upgrades to the character include magic abilities, new and up-gradable armors and weapons, mystical relics and other treasures when you earn XP. The system is laid out in a sense that as you grow powerful, you will be come the Champion of the Gods, a God of War. The online will support 4v4  and each team can have different aligned god warriors which will create unique team variations.

Favor of the Gods, their signature multiplayer mode, will have the teams fighting to accumulate a target amount of “Favor” (points) which are earned by kills and other methods. Other than klling you can capture altars, set up traps and collect red orbs. Each map will have power-ups such as Hermes Boots. Each map will also represent the series ideal of “epic larger than life moments”. In the map that was revealed in the trailer, there is Polyphemus, the one-eyed son of Poseidon who wants to kill the players. When you’ve earned enough favor in a round, the Spear of Olympus will be dropped down which can be used to kill the titan and win the match.