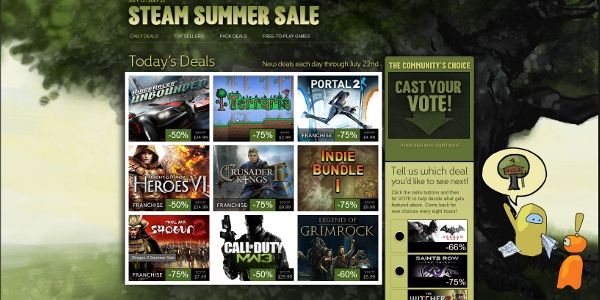 It was bound to happen sooner or later. The Steam Summer Sale has officially started. Are you ready to throw money at GabeN?

There are a few changes from the last couple of sales. First off, there are no achievement hunts or contests. These have been replaced by “Flash Sales” and “Community Choice” deals. Flash sales last for less than a day (for instance Deus Ex Human Revolution is on sale for $7.50 for the next four and a half hours or so). The “Community Choice” deals are voted on by Steam users and last for 8 hours. At the moment, users can choose between massive discounts on Saints Row: The Third, Batman: Arkham City, and The Witcher 2.

Since the Flash Sales and Community Choice deals may very well change before you read this, we’ll just give a rundown of today’s daily deals.