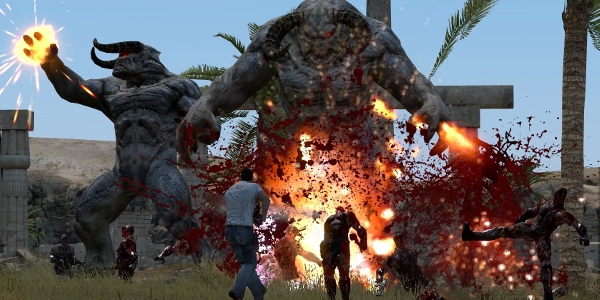 Croteam and Devolver Digital have announced Serious Sam 3: Jewel of the Nile. This expansion pack for Serious Sam 3: BFE is set for a PC release in October. Croteam’s Davor Hunski claims that the expansion “tells more of Sam’s story and cranks up the insanity.” Having played through some of it, I’m surprised to learn that Serious Sam 3 had a story (other than “go kill these monsters”).

According to the press release, the expansion will feature three new campaign missions set around the Temple of Isis on the real life Egyptian island of Philae. Devolver Digital’s Fork Parker posed the question as to whether Philae had any nude beaches, adding that “the only thing better than fast-paced, over-the-top action is a perfect pair of digital flesh melons.” Unfortunately, this doesn’t seem to be the case in real life. However, reality doesn’t feature hordes of screaming headless guys running around with bombs grafted on their hands, either. So, the developers shouldn’t feel constrained by anything remotely resembling reality.

If you are interested, you may read the full press release below.

Zagreb, Croatia – Croteam and Devolver Digital have announced Serious Sam 3:  Jewel of the Nile, an all-new series of missions for the blockbuster gonzo-shooter Serious Sam 3: BFE that is set to release on PC October 2012. The explosive new expansion will contain three new campaign missions set within the story of Serious Sam 3: BFE and follow Sam “Serious” Stone as he tracks down a powerful artifact on an ancient island to swing the tide of battle against Mental’s invading alien horde.

“Croteam is very excited about the reception Serious Sam 3: BFE received from our fans so we’ve worked really hard to make sure the Jewel of the Nile expansion tells more of Sam’s story and cranks up the insanity,” said Davor Hunski, Chief Creative Guy at developer Croteam.

“So does this island of Philae in Serious Sam 3: Jewel of the Nile have any topless beaches?” asked Fork Parker, CFO of Devolver Digital. “The only thing better than fast-paced, over-the-top action is a perfect pair of digital flesh melons.”

Serious Sam fans can join in the discussion of all things Sam at facebook.com/SeriousSamFan or follow @SeriousSamIAm on Twitter.