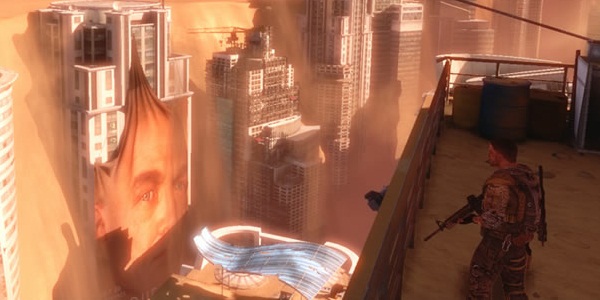 Heart of Apocalypse (Now) the game?

Spec Ops: The Line‘s demo is available currently on Xbox 360 and PS3 in anticipation of its June 26 launch.

Jump into the sand-filled boots of Captain Martin Walker to brave the desert-reclaimed Dubai in search of an elusive Colonel Konrad. If you paid attention in English class, you know where this is going.

The first thing that struck me as I worked through the half hour demo was the idea of a sort of localized apocalypse. The oasis paradise of Dubai has been essentially destroyed by continuous sandstorms. If you saw the newest Mission Impossible film, you got a glimpse of what Dubai’s citizens have to deal with. Luckily for Mr. Hunt, he only had to endure ten minutes; the storms can, on occasion, last for days at a time.  At the start of the demo, you’ll be able to listen to the banter of your two teammates, but I paid more attention to the demolished skyline above the horizon and the tangle of wrecked cars containing desiccated corpses, like an Arabian Fallout game.

The game’s story draws heavily on the short novel Heart of Darkness by Joseph Conrad, which was in turn adapted into the Vietnam War masterpiece Apocalypse Now, starring Martin Sheen as a special forces officer sent into the jungle to assassinate Colonel Kurtz. References all over the place, is what I’m saying.

In between the two playable levels, the demo gives you a brief montage with voiceover explaining the start of the story, and the playable action ends on a cliffhanger (or cliff-faller?).

The gameplay, however, feels significantly less compelling. It has perfectly standard third person shooting controls, but the demo gives no real indication that the combat does much in the way of innovation.  Aiming is precise but stiff, and the guns that show up are rather basic and predictable. There is a serviceable cover mechanic, but it’s not really anything you haven’t hidden behind a dozen times before. And, to ensure that you take cover well, the level design is very corridor-like, with enemies always coming at you from directly in front of you to line up in your shooting gallery. Despite all the cover, the enemy AI doesn’t use it very well. They’ll bunch up and get try to run against each other, or do silly things like duck and hide on the other side of a couch that one of your men is hiding behind.

(Unless couches in Dubai are known to be bulletproof…)

One interesting touch I noticed while watching a round of couch-tango was that since one of the antagonist groups is US Army, they look exactly like you do. This plays with the obvious and easy demarcation convention of “us versus them” usually accomplished with different uniforms and different languages, or at least different accents.

The interesting ideas and story presented in the demo probably aren’t enough to inspire me to make this a day one purchase, but then I also don’t have a particular interest in modern military games. If you do, however, there are definitely worse ways to spend 45 minutes, and you may find that the unobtrusive mechanics are a fine delivery mechanism for an action game remake of a depressing action movie remake of a depressing novel.