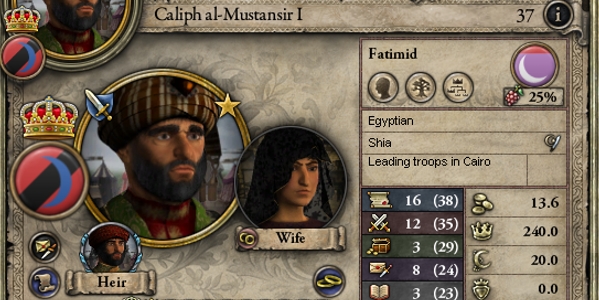 Paradox Interactive has just announced the Sword of Islam DLC for Crusader Kings 2. The main selling point of this DLC is that, for the first time in the history of the series, you’ll be able to play an Islamic dynasty. Finally, you can experience building up a powerful dynasty (only to see it crushed by the Mongols) from an Islamic perspective. Paradox hasn’t released many details about how the Muslims will play differently than European Christians, but the latest developer diary promises “lots of specific new mechanics for the Muslims, creating a whole new experience for the player, where laws, marriage, holdings, traits, titles and more work entirely different.”

This DLC will come out alongside the 1.06 patch for the game which adds new features like “ an expansion of the map into Mali-Songhay, differentiation on strong and weak claims, new plot,” and a more in-depth combat system. You can watch a trailer for the Sword of Islam DLC after the jump.[youtube id=”o0QPD6qHMG4″ width=”600″ height=”350″]