In the wake of the announcement of the closing of Kingdoms of Amalur developers 38 Studios and Big Huge Games, a large number of gaming  professionals took to Twitter to post notices of job openings in the industry under the hashtag #38jobs.

Companies such as Epic Games, Microsoft, Bethesda/Zenimax, Insomniac, Blizzard (with a reported 110 openings), and dozens more responded in merely a few hours, encouraging those affected by the layoffs to send in their applications. Unfortunately, as the hashtag became more popular, Twitter spambots decided to descend upon the proceedings, resulting in a very poor noise-to-signal ratio. 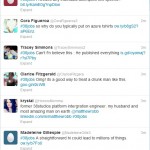 This screenshot to the left shows only 12% of the visible tweets at one time were actually related to the community effort, and the percentage went even farther down just minutes after this shot was taken. Due to the hijacking of the hashtag, freelance journalist Alex Rubens has set up a publicly available Google doc with the list of job openings that he can glean from Twitter and that are being sent directly to him. At the time of publishing, Rubens’ list is at 59 hiring companies and counting, representing many hundreds of openings. According to a news organization local to the Rhode Island-based 38 Studios, 379 people were in their employ as of March 2012.

A Facebook page has also been started to support the effort and allow people to more conveniently share information with each other.

Brokejoysticks.net will keep you updated as we learn more about this situation.